Dumfries and Galloway Self Catering cottage, The Middle Byre, Gatehouse of Fleet, sleeps 6 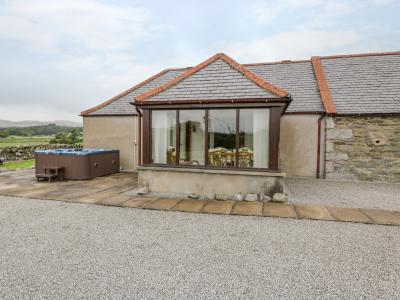 This cottage is situated in the village of Gatehouse of Fleet, near Kirkcudbright, and can sleep six people in three bedrooms.

The Middle Byre is a charming end-terrace retreat located in the village of Gatehouse of Fleet, Dumfries and Galloway. Hosting three bedrooms; a double with en-suite, a twin with en-suite, and a twin, along with a shower room, this property can sleep up to six people. Inside you will also find a kitchen/diner, sitting room, and a sun room.

To the outside is off-road parking for three cars and an enclosed patio area with furniture, and communal grounds. Situated in a wonderful location with pleasant views of the lovely area, The Middle Byre is a heart-warming retreat in an excellent part of Scotland.

Holiday from hell
Give Clauchan Holiday Cottages a wide berth! What was once a well-run, friendly business could not now be further from that, seemingly since Ian Clark took over the running of it. Our stay there for our fortnight's summer holiday in 2019 (our third visit there in consecutive years) was abruptly cut short when Mr Clark, having been aggressive, unpleasant, and unreasonable required us to leave halfway through week one! Before we left we asked for a reason and he refused to give one. When we asked for a refund he told us we would have to 'see him in court?. When we then entered into correspondence with his solicitor it was made clear that would have to have to be in a Scottish court. Luckily we had a lawyer friend who was able to help us, or we would not have known what to do, or been able to finance the litigation. The court process involved him lodging pleadings which were full of dishonesty and exhibited the same unreasonableness we had experienced in person. Eight months later we now have a court order from Dumfries Sherriff's court requiring him to refund the full cost of our stay and £500 on top. This ?Holiday from Hell? has also made the national press. You might wonder: ?What an earth happened?? We are still perplexed. All the more so because we were repeat bookers and thought we had a good relationship with Mr Clark. The year before I had helped him install a hot tub (I am an engineer), for which he seemed grateful and then gave us a discount on our 2019 booking. We rebooked The Middle Byre, where we have previously stayed. The party composition was the same as the previous year. On the first night of our stay we had one person over the maximum party number, because my father stayed over, having helped transport our boat up. He left the next day, as he was always going to. Mr Clark became aware my father was there (he seems to use the fact that he comes on to the property daily to check the hot tub as a reason to peer in through the windows). He raised his concern over it with us but seemed to be satisfied that the problem had been resolved when he left. However he then seemed to be finding a way to pick fault with us. He complained about the fact that our dogs were crapping on the grass. This was bonkers, when this was the grass within the curtilage of The Middle Byre, which he advertises as a ?pet friendly property? and we were cleaning up as fast as we reasonably could behind them. He then started to allege that we were still over the numbers, because he treated our 20-month child as counting, despite that being clearly contrary to the guidance on all his advertising platforms. Despite him clearly being wrong about that, in an attempt to mollify him our six-year-old daughter went and stayed with friends along the road, causing our family to be split up on our main annual holiday. Even that didn?t work! He continued to be rude to my mother, so that she did not want to stay and then told us ?just go?. In an attempt to salvage our holiday a friend who stays nearby came to try and reason with him but was abruptly shown the door. He came back to us, equally bemused, stating that Clark seemed to have some sort of personality disorder. A conclusion with which we concur. We ended up packing our cars and returning home to Lancashire, not just having had our holiday ruined, but feeling bullied and abused. It is hard to express in words quite how weird and unpleasant the whole experience has been, including the necessary process to obtain compensation. It is hard to think of anyone less suited to be in the holiday business.
427tc
2020-05-11

Perfect place for a family get-away
Beautiful location on a farm out in the country but very close to lots of activities and lovely beaches. The accommodation is stunning and spacious, the owner welcoming and helpful, and our wee dog loved the walks in the lanes. Highlights for the family were being able to relax in the hot tub after a day out and having a huge lounge area with plenty of space for two boys and a baby to play and four grown ups to chill. That's when the boys weren't out enjoying the trampoline, football pitch and swing ball which the owner thoughtfully provided. There's also a sun room to bask during the day or watch the sunsets at night. The views all around are to die for and it's just so peaceful. None of us wanted to come home and we'll definitely be back.
Stay439909
2019-07-09

Get an Ordnance Survey map covering the Gatehouse of Fleet area.