HERITAGE HIGHLIGHTS:   The Black Bull Inn may be the oldest hostelry in Scotland 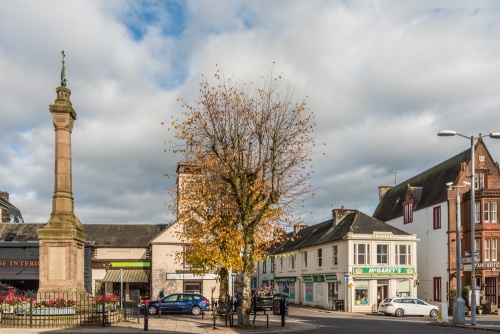 Moffat is a historic spa town on the River Annan in Dumfries and Galloway, about 17 miles north of Lockerbie. It is also just off the busy A74(M) making it an excellent stopover point for travellers. A large area of Moffat is preserved as a conservation area, ensuring that its architectural and cultural heritage is preserved.

The broad High Street is wonderfully picturesque, with numerous examples of historic architecture. On High Street is a statue of a sheep, sculpted by William Brodie, a reminder that Moffat was for many years the centre of a thriving woollen industry.

Poor Brodie; he made a terrible mistake in sculpting the sheep - he forgot to give it ears! The shame of his mistake and the ridicule it received was too much for the sculptor to bear and he eventually committed suicide, or so the story goes.

Not all sheep-related activity in Moffat was legal; just north of the town is a large depression known as the Devil's Beef Tub, where rustlers hid their stolen sheep and cattle. 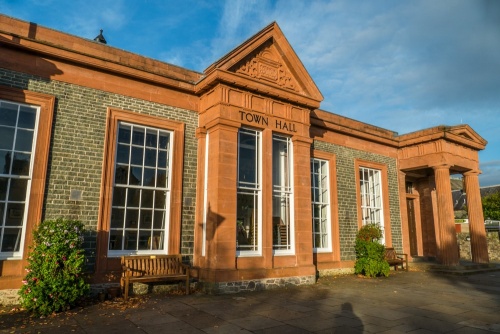 Moffat really made its reputation as a spa town, with visitors coming to enjoy the health-giving benefits of the local water. In 1633 Moffat was nothing more than a small village. But when a mineral spring of sulphurous, saline water was discovered in that year it began a transformation that rapidly made Moffat into a popular destination for visitors.

The spring waters were said to cure a wide variety of ills from gout and rheumatism to skin conditions and digestive complaints. A second mineral spring was found in 1748, bringing even more visitors to Moffat. Throughout the Victorian period, the town enjoyed a reputation as a fashionable destination and it seems likely that as many people came to Moffat just to enjoy fashionable society as to actually take the waters.

The heady days of being a popular spa town ended abruptly in 1921 when the Hydropathic Hotel burnt down.

The hills surrounding Moffat are crisscrossed with walking trails, making the town a magnet for walkers keen to enjoy the beautiful scenery. Moffat was the first town in Scotland to be awarded 'Walkers are Welcome' status. And you can also enjoy the wonders of the night sky, for the town has special street-lighting that minimises light pollution and allows you to enjoy the starlight nights.

The best place to learn about Moffat and its fascinating history is the Moffat Museum on High Street. The museum is partly housed in a historic bakehouse building with a cobbled yard. Highlights include a look at the origins of Moffat as a spa town, a working model of the old Moffat railway station, and an exhibition on people linked to Moffat's history. There is a special audio-visual room where you can watch a short film telling the story of Moffat from earliest times.

One of the museum highlights is an exhibit detailing the finding of the Rotten Bottom Neolithic Hunting Bow (the bow itself is in Edinburgh). The story begins in 1990 when a walker near Hartfell, north of Moffat, found what he thought was a piece of fossilised wood. It was, in fact, a Neolithic hunting bow. subsequent carbon dating put the bow's age at 6000 years, making the earliest hunting bow found in Britain. 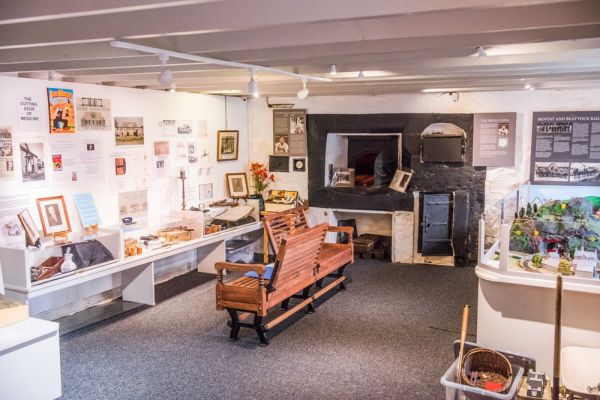 At the bottom of High Street is the parish church of St Andrew, set in spacious grounds. This eye-catching church in Early English style was built from 1884-7 to a design by John Starforth, using sandstone quarried at Corncockle. Its most notable feature is the striking west tower, flanked by stair towers. The interior boasts a superb collection of Victorian stained glass including windows by Starforth himself.

In 1790 James, Earl of Hopetoun gave land on the present site to erect a new, larger church. The spire of that new church was decorated with the Earl's crest, the Flying Spur, giving it the nickname 'Flying Spur Kirk'. The 18th-century building was replaced by the present magnificent church in 1887. 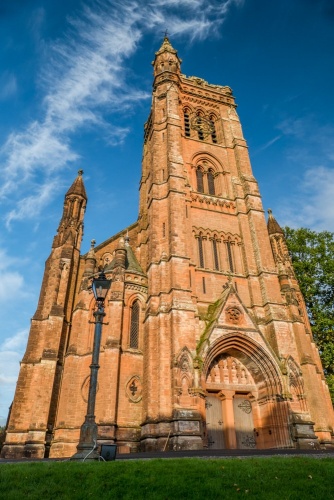 The earliest Anglican Church in Moffat dates to at least the 12th century. In the religious turmoil of 'The Killing Times' that church became a prison for Covenanters on their way to execution. The medieval church was situated at the southern end of High Street, but the only remainder is a short section of wall in the Old Churchyard.

The medieval building was replaced around 1600 but this building collapsed in the late 18th century, leaving only the south gable wall still standing. On the exterior of the wall is a finely carved heraldic plaque bearing the arms of the Johnstone and Douglas families and the date 1665. Above the coats of arms are the initials AI and ND. 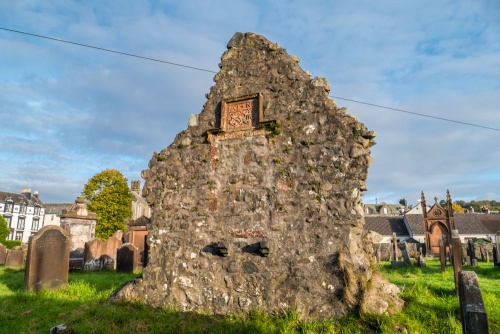 Remains of the 1600 old church

The graveyard we see today is not entirely original. By 1747 the site has full so the ground level was raised with four feet of soil to make room for new burials.

During the religious turmoil of the 17th century John Graham of Claverhouse, 1st Viscount Dundee was charged with ridding the south of Scotland of Covenanters - those dissenters who objected to the English monarchs' attempts to interfere in the Presbyterian Church of Scotland. 'Bloody Clavers', as he became known, pursued Covenanters with a vengeance.

In 1685 he came to Moffat and called residents to the Old Churchyard where he ordered them to take an oath of allegiance to the king. The Covenanter cause had many supporters in Moffat and it seems that many Moffat residents fled into the hills rather than be forced to take the oath. 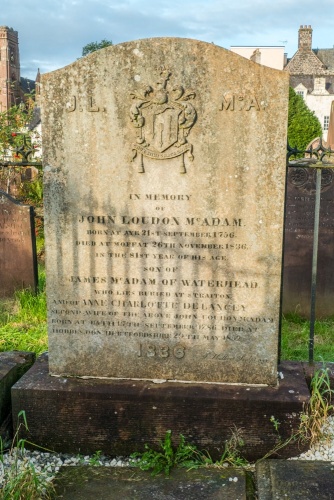 The Old Churchyard is full of fascinating historic gravestones. The information panel at the churchyard entrance highlights four of these graves.

On Church Gate, opposite St Andrew's Church, stands the picturesque Black Bull Inn, said to be the oldest hostelry in Scotland (for another contender see our article on the Kenmore Hotel in Perthshire). The Black Bull dates to 1568. In the 'Killing Times', Viscount Dundee stayed at the Black Bull during his persecution of Covenanters in the area.

Poet Robert Burns visited the Black Bull several times and knew the area well. He scratched a verse inspired by a local lady he admired on a pane of glass. The pane was presented to the future Tsar Nicholas I in 1817 and is now in St Petersburg, Russia.

There is a possibility that the infamous grave-robber William Hare (of Burke and Hare) stayed here while being aided into exile after giving evidence against his former partner-in-crime in 1829. 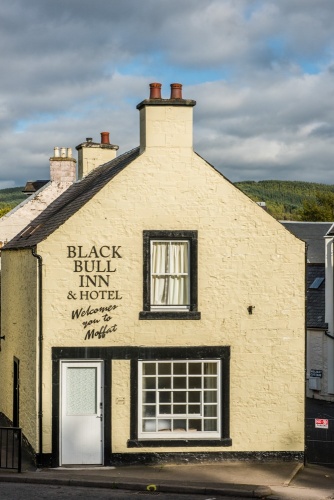 In Station Park at the southern edge of town is a memorial to Air Chief Marshal Hugh Dowding, who was born in Moffat in 1882. The memorial was designed by Scott Sutherland, who also created the iconic Commando Memorial at Spean Bridge.

Dowding commanded the RAF Fighter Command during the Battle of Britain and is credited with being one of the men most responsible for Britain's eventual victory in that crucial air campaign. He also helped organise air cover for the evacuation at Dunkirk.

The Dowding Memorial stands at the western edge of the park. It was unveiled in 1972, two years after his death. An annual service is held here to mark the anniversary of victory in the Battle of Britain. Dowding is not buried in Moffat; he was accorded the nation's highest honour and was interred in Westminster Abbey. 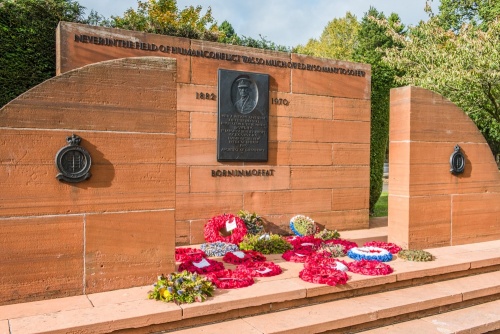 On the eastern side of High Street stands the Star Hotel. At just 6m (20 feet) wide and 162 feet long, the Star is the narrowest hotel in the world, a claim that has been verified by the Guinness Book of World Records. It's a pretty impressive sight to behold! 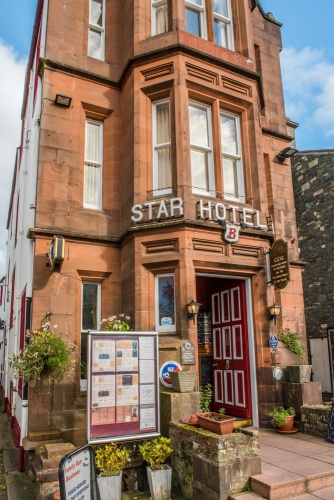 The Star Hotel - the world's narrowest

The Smallest and Shortest Streets

Almost opposite the Star Hotel on the west side of High Street is a narrow alley glorying in the name of Syme Street. This is said to be the narrowest street in Scotland. If you stroll up Star Street beside the Star Hotel you will quickly reach Chapel Street on your left, linking Star Street to Well Street. This is said to be the shortest street in Scotland.

So within a few hundred yards, you have both the narrowest and the shortest streets in the country. 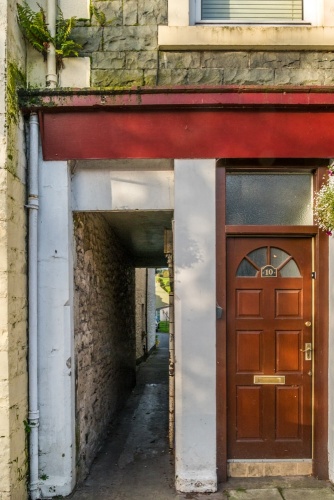 Just east of Moffat on the A708 is Craigieburn Garden, a taste of the Himalayas in lowland Scotland. Though the garden is relatively modern, it stands on a site with a long history, described by poet Robert Burns as a place of 'spreading leaves and flowers, ... the wild birds singing'.

The 6-acre garden has been featured on BBC Gardener's world and features a wonderful mix of Nepalese elements integrated into the traditional Scottish landscape, with formal areas and woodland trails. Where else would you see topiary and clipped hedges side by side with Nepalese prayer flags? Craigieburn is a delight.

Seven miles east of Moffat is the Grey Mare's Tail nature reserve, centred around the fifth highest waterfall in Britain. The 60m (200-foot) waterfall flows tumbles down the deep gorge of Tail Burn to Moffat Water in the valley below.

A trail leads beside the burn to Loch Skeen, the highest upland loch in the Southern Uplands. In the loch flourish Britain's rarest freshwater fish, the vendace. Towering above the loch is White Combe, the highest hill in Dumfries-shire. At the northern edge of the nature reserve is Dob's Linn, an important geological site famous for its fossils.

Moffat is also known as the birthplace of Moffat toffee (which actually isn't a toffee at all but a boiled sweet). The recipe for Moffat toffees was created by Janet Cook Johnstone in the late 19th century and handed down through generations of the same family to the present day. It is still made in Moffat and available in the Moffat Toffee Shop on High Street.

More self catering near Moffat

More bed and breakfasts near Moffat