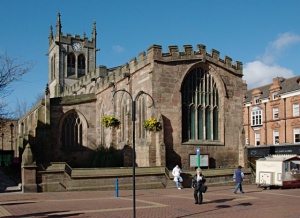 The county town of Derbyshire does not receive much attention as a tourist destination, but the city is not without its appeal. The Industrial Revolution transformed Derby into a centre for the silk industry and then a major railway terminus before Rolls Royce chose Derby for its aircraft engine works.

The Romans were the first to settle here, erecting a fort on high ground above the river. They soon moved across the Derwent to build a second, larger fort, called Derventio. A settlement grew up around this second fort, aided by the position of the fort on Rykneld Street, a major Roman road to the north.

The Saxons later took over the old Roman fort, renaming it "Little Chester". The Saxon's settled the area, and many of Derby's suburbs still boast names that are obviously of Saxon origin.

The Danes took Derby in the 9th century, and it became one of 5 Danish Boroughs, or administrative districts (the others being Nottingham, Lincoln, Leicester and Stamford). These boroughs, with the exception of Stamford, later became the administrative centres for the surrounding shires, or counties. 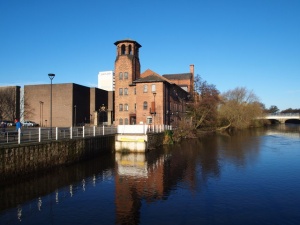 In 1750 William Duesbury established a porcelain works on Nottingham Road. In 1775 the company was granted a royal warrant, allowing it to use the name Royal Crown Derby China. Today the works offer regular tours, and there is a fine collection of local china in the Derby Museum.

The most impressive building is Derby Cathedral, which began life as All Saints church before it was raised to cathedral status in 1927. The church is largely 16th century, though it was extensively remodelled by James Gibbs, the architect of St. Martin-in-the-Fields, in 1725. The interior is notable for its superb wrought-iron screens, the work of local ironsmith Robert Bakewell, as well as the tomb of the redoubtable Bess of Hardwick (see Hardwick Hall). 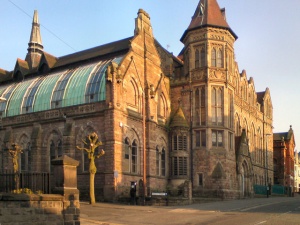 St. Mary's on the Bridge

This 14th-century bridge chapel is one of only six such chapels remaining in England. The chapel was allowed to levy a toll on people and livestock using the bridge, which must have resulted in a considerable income, as the bridge was the only crossing of the Derwent in Derby for many centuries.

There was a bridge here in the Saxon period, though the present structure is 18th century. In 1588 the chapel saw the brutal execution of three Roman Catholic priests, the "Martyrs of Padley", who were hung, drawn, and quartered, and their remains hung above the chapel entry.

There are still remains of spikes on the bridge, which were intended to serve as places to deposit heads of executed criminals! The church fell into disuse after the Reformation and saw use as a warehouse and dwelling before being restored in the 20th century. It is now used for interfaith worship.

The Shire Hall, also known as County Hall, is an imposing 17th-century building in classical style, the work of George Eaton. The hall is a five bayed structure standing before a cobbled courtyard. It was used not only for holding courts of justice but also as a multi-purpose gathering place and entertainment centre until the Assembly rooms were built in 1714.

All images are gratefully republished under a Creative Commons license

More self catering near Derby

More bed and breakfasts near Derby

Self Catering near Derby