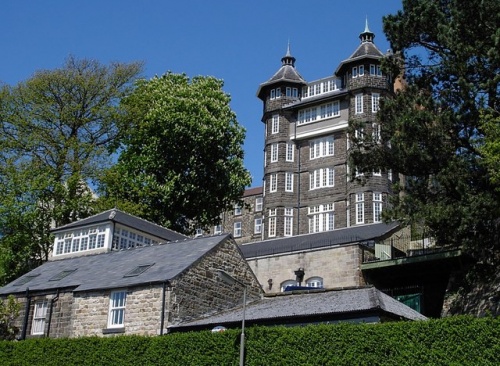 There are actually three Matlocks stretching along the Derwent River; Matlock Bank and Matlock Bath join with Matlock itself to provide a popular centre for hill climbing and cavern exploring in the limestone hills nearby.

The Matlocks were once thriving inland spa towns, famous for the mineral springs that bubble to the surface here. Most of the "hydros" or spa hotels that catered to visitors were located in Matlock Bank; at the height of the town's popularity in the late Victorian period at least 20 hydros vied for attention.

The attractive four-arched bridge across the Derwent dates from the 15th century. It was the subject of a painting by JMW Turner, "The Bridge at Matlock". In Matlock itself ("Old Matlock") you will find most of the buildings which predate the town's spa heyday. St. Giles church is an attractive building with a Perpendicular style west tower and a Norman font (re-discovered in the Rectory garden!).

Overlooking the towns are the rocky crags of High Tor and the Heights of Abraham, so named because a local army officer returning from fighting the French in Quebec with General Wolfe said that it resembled the cliffs along the St. Lawrence River.

The Heights can be reached by cable car starting near the railway station. Two showcaves are open to the public at the Heights of Abraham; Rutland Cavern and Great Masson Cavern are both natural caverns that were expanded through lead mining.

High Tor is an imposing limestone cliff above Matlock Bath. At the top of the cliff is a pleasure garden now owned by the local authority. Paths wind along the edge of the cliffs, providing superb views - but there are no fences, so you must have a head for heights! Behind the Tor are the remains of two mines which may date back to the Roman era.

In the museum exhibits tell the story of the area's lead mining history from Roman days to the present. There are extensive displays of mining equipment, including pumps, as well as displays showing what a miner's life was like, and models of lead workings.

More self catering near Matlock

More bed and breakfasts near Matlock

Self Catering near Matlock