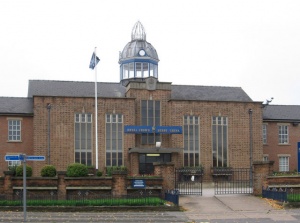 Andre Planche, a Huguenot refugee from France, established the first china works in Derby a few years before 1750. Derby China began production around 1750 in a factory on Nottingham Road. William Duesbury allied with Planche to promote his china figurines.

It was Duesbury who bought Chelsea China and transferred that companies operations to Derby. They opened London showrooms in 1773, and Duesbury was able to boast that the company's Derby operation was creating a "second Dresden".

There are examples of some early Derby pottery preserved at the works museum, and another extensive collection is maintained in a special Ceramics Gallery at the Derby Museum.

The factory has recently opened a special Demonstration Area (included in the factory tour) where visitors can see craftspeople engaged in making porcelain, figure painting, flower making and gilding. You can ask questions and even try your hand at some of the skills. The factory shop sells both seconds and items currently in production.

Self Catering near Derby