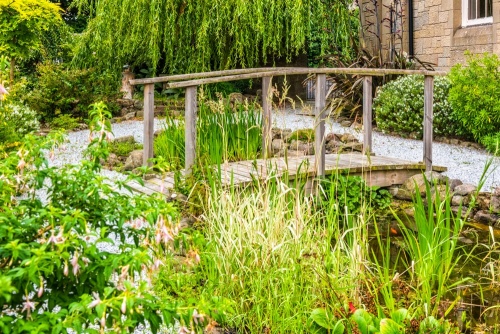 In 1745 a church was erected in Crookham to serve the local Presbyterian congregation, which until that time worshipped in a small building beside the River Till.

The 18th-century church lasted almost 200 years but by 1932 it was in such poor condition that it had to be torn down. The original stones were then used to build the present structure, known as the Crookham United Reformed Church.

2013 saw a number of celebrations surrounding the 500th anniversary of the Battle of Flodden, which took place just a few miles away. As part of the celebrations, a Peace Garden was laid out on three sides of the church exterior.

The garden was designed by Dougie James of Selkirk, who laid out several small areas representing 'energies'. For example, one of the first areas is designed around a sword stuck point-first into the ground.

These areas lead to the peace garden itself, centred on a small single-arched footbridge across a pool of water, representing 'the beauty of our reality here and now'. 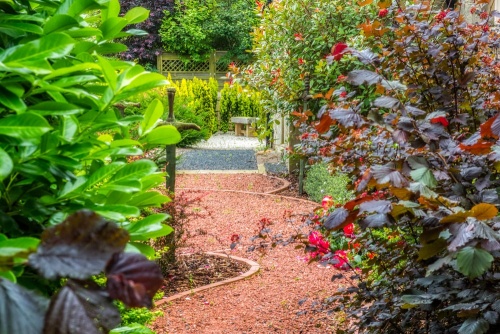 There are five main garden areas based on colour themes; black, red, grey, white and gold. You enter the black garden first, where the planting symbolises fear, anger and repression. You move from the black garden to the red garden, representing conflict and confrontation. Red gives way to grey, based on loss and coldness, and finally to white and gold, a space of forgiveness and renewal.

At the rear of the garden is an interactive timeline, moving from the Battle of Flodden through the following five centuries, through religious reform and the introduction of more peaceful attitudes such as Quakerism, prison reform under Elizabeth Fry, and the abolition of slavery, represented by William Wilberforce.

The Peace Garden is a peaceful place; a place for quiet reflection, and though small, it is a place that has much larger implications. There are benches to sit in hedge-lined spaces, quiet corners to simply stand and think. 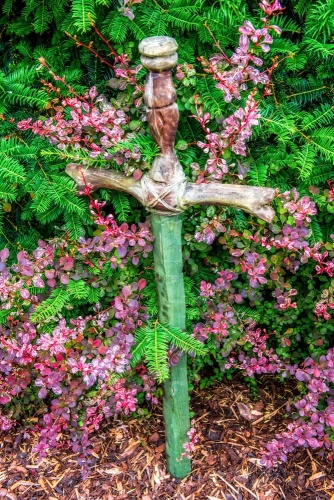 Sword sculpture in the red garden

The specific trees, shrubs and flowers that make up the garden are often symbolic. For example, one of the trees is the 'Nagasaki Tree', planted as a memorial to those who died when atomic bombs were dropped on the Japanese cities of Hiroshima and Nagasaki in WWII.

Interwoven with the plants, paths and water features that make up the garden are sculptures such as 'Swords into Ploughs', a modern sculpture illustrating the Biblical verse (Isaiah 2:4) 'and they shall beat their swords into ploughshares, and their spears into pruninghooks: nation shall not lift up sword against nation, neither shall they learn war any more'.

The garden is part of the Flodden Ecomuseum, incorporating the Flodden Peace and Reconciliation Centre, which offers lectures, art displays and musical concerts. The Flodden Ecomuseum includes sites as far-flung as Stirling Castle and The Mary Rose exhibit in Portsmouth in addition to 24 historical sites in the Tweed Valley - on both sides of the Scottish border. 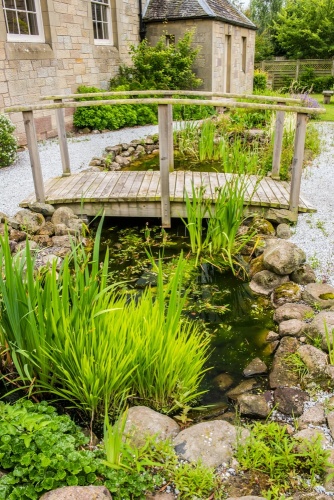 The bridge in the white and gold garden

The Peace Garden is extremely easy to find. It surrounds the Crookham United Reformed Church, on the south side of the B6353 in Crookham village, two miles east of Branxton and the Flodden Battlefield and one mile south-west of Etal.

The church is generally locked (it was closed when we visited) but the garden is always open. There is no obvious parking area, so we simply parked on the side of the road in front of the church. 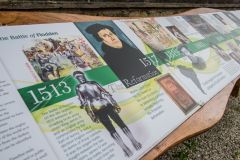 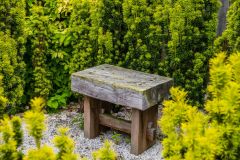 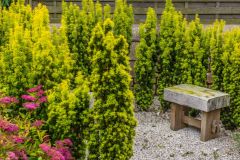