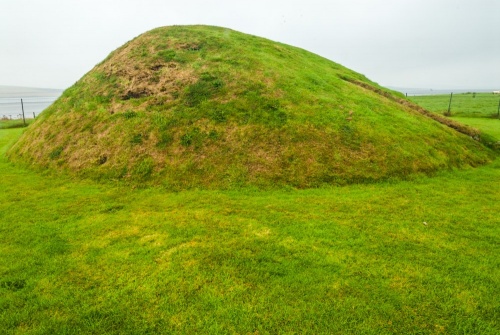 A Neolithic chambered tomb on the shores of Stenness Loch. Part of the Heart of Neolithic Orkney World Heritage Site.

Unstan is generally described as Neolithic, though Historic Scotland, who are responsible for the site, seems a bit doubtful on that dating. It is contemporary with similar sites around the southern ends of Loch Stenness and Loch Harray.

Unstan is located on the shore of Loch Stenness, about one mile from the Stones of Stenness stone circle. The scenic location is part of the allure of Unstan. 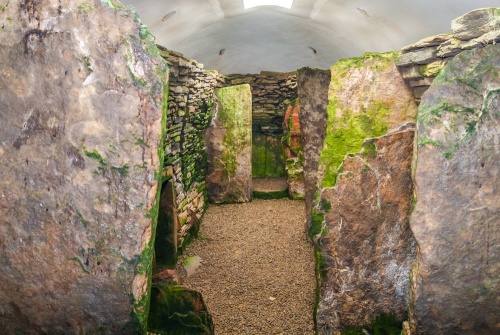 Though often described as a circular cairn, Unstan is not, in fact, circular, but elongated at one end. Entry is through a very low central passage, necessitating a duck-waddle or hands and knees effort to get inside. You emerge into a long passage divided into 5 partitions by upright slabs. The cairn appears to have been used as a communal burial chamber. When it was excavated in 1850 piles of bones were found in each partition, and two crouched burials were discovered in the single side chamber.

Along with the bones were found sherds of pottery. This pottery was of such unique construction that the name 'Unstan ware' was thereafter used to describe similar finds throughout Britain. Unstan ware is characterised by a round base and grooved patterns below the rim. It is generally considered to date to at least 3000 BCE.

On the lintel of the side chamber is an incised carving of a bird, thought to be Viking in origin. Look closely, it isn't apparent at first glance! The roof has been much repaired and now sports a concrete cap, with skylights inserted to allow natural daylight to illuminate the interior.

Unstan cairn is visibly signposted from the A965 road, but when we visited the signpost to the cairn was right at the turning, with no advance warning, so it is easy to drive right past, as we discovered. The road looks like a driveway to the nearby farm rather than an access road - that's because it is the farm driveway, but carry on past the farmhouse to a small parking area which can handle a maximum of a half-dozen cars. The path from the parking area is very short, and level, though it can be muddy after a rain. 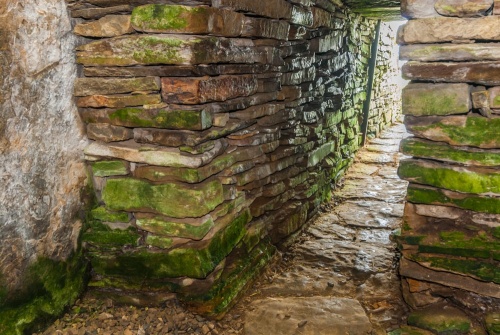 Not as striking as nearby Maes Howe, but on the other hand, there are no crowds, and no waiting to get in! Unstan is rather intriguing, and I couldn't help wondering what purpose the submerged foundation wall to the rear of the cairn might have originally served. The interior is well supplied with natural light and in a very good state of repair. Perhaps not reason alone to visit the area, but a very nice addition if you are visiting the other sites around Lochs Stenness and Harray. 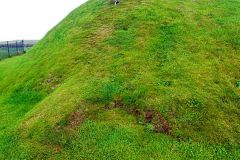 About Unstan
Address: Stromness, Mainland, Orkney, Orkney, Scotland
Attraction Type: Prehistoric Site
Location: 3.5 m northeast of Stromness, on a farm road off A965. The road is signposted from the A965, but nevertheless it is easy to miss, so keep your eyes open!
Website: Unstan
Historic Scotland
Location map
OS: HY282117
Photo Credit: David Ross and Britain Express

Nearby accommodation is calculated 'as the crow flies' from Unstan Chambered Cairn. 'Nearest' may involve a long drive up and down glens or, if you are near the coast, may include a ferry ride! Please check the property map to make sure the location is right for you.

More self catering near Unstan

More bed and breakfasts near Unstan