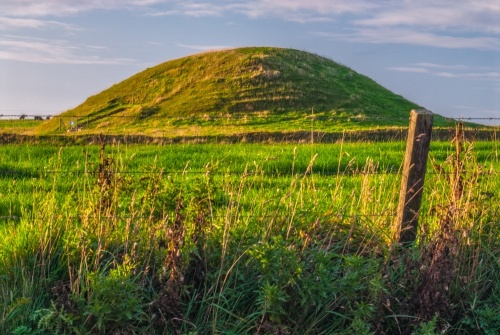 Our best guess is that the cairn was begun between 2900 and 2700 BCE making it roughly contemporary with the Ring of Brodgar and the other monuments in the Loch Harray area. 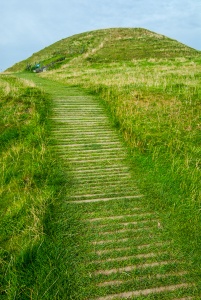 Climbing to the
cairn entrance

What is Maes Howe?

Maes Howe is a burial mound built of drystones covered with turf, surrounded by an outer ditch and bank. It may have been the final resting place for a community or a family group. Obviously, if this was a family group, the family must have exercised considerable influence in Orcadian society. It would seem that the mound was originally conical in shape, and its current rounded contours may be the result of early 20th-century reconstruction.

The tomb is entered by way of a long, low passage topped with large, flat flagstones. The central chamber rises to about 4 metres high - roughly 15 feet- with large upright stones at the corners. Opening off the central chamber are two smaller burial chambers.

These burial chambers would originally have contained groups of bones, and perhaps burial goods. When the tomb was first excavated there were no bones remaining.

In the 12th century, the chamber was entered by Norse visitors who left runic graffiti on the walls. Together, these runic inscriptions form perhaps the finest collection of Nordic runes in Britain.

The Orkneyinga Saga tells us the tale of these early grave disturbers. Earl Rognvald (see St Magnus Cathedral) sheltered in the cairn while on their way to a Crusade in the Holy Land. Later, in the year 1153, Earl Harald and his men were caught in a snowstorm while journeying to Firth. To escape the storm they broke into the cairn. To while away the time, they carved inscriptions on the walls of the inner chamber. There are 30 inscriptions in total.

What did the Norse carve? Well, some are quite rude in nature, and I won't repeat them here, but it seems as though the site must have been a trysting place for local lovers. Some are very simple, like 'Ottarfila carved these runes', and a rather boastful 'These runes were carved by the man most skilled in runes in the western ocean".

Several of the runes mention a treasure in association with Maes Howe.

"Is to me said that treasure is here hidden very well."

Might there be any truth to tales of a treasure, or was this merely idle graffiti, or wishful thinking? Certainly, the original burials in Maes Howe would not likely contain any great worldly treasure.

However, it seems possible that the tomb was reused by Viking settlers in the 9th century. If that were the case, it might be that there was a Viking treasure of some sort hidden at Maes Howe. Be that as it may, no trace of treasure has ever been found at the site.

The entry passage is aligned so that the setting midwinter sun shines down the passage and strikes the back wall of the chamber. This alignment occurs for several weeks either side of the winter solstice. The sun also aligns perfectly with the monolithic Barnhouse standing stone, approximately 2750 feet away, and with Ward Hill, on Hoy.

Now, as to why the builders of Maes Howe created this particular alignment, we are on shaky ground. It seems likely that marking the shortest day of the year was an important indicator of the turning of the seasons, and the nearness of Spring and new growth. Whether there was also a religious purpose to this alignment we simply do not know.

A wonderful visit. The guide was extremely informative and entertaining, and our children were captivated by the experience. It does require a certain amount of agility to get into the central chamber; you have to crouch and waddle like a duck, as the roof of the passage is very low indeed.

If you suffer in enclosed spaces you might not enjoy the experience - though I found it quite light and spacious inside the cairn. My only quibble is that no photography was permitted within the central chamber; I'd have loved to get photos of the runes, but it was expressly forbidden, which seems a great shame.

Maes Howe is located directly north of the A965 just east of the turnoff to Brodgar. There is no on-site parking, however. You have to continue along the road west, past the Brodgar road to the Maes Howe Visitor Centre.

Visits to the burial chamber are only available by guided tour. It is a very good idea to pre-book your tour, especially during the summer months. You can make arrangements through the visitor centre, at the Historic Environment Scotland centre at Skara Brae, or online through the HES website. 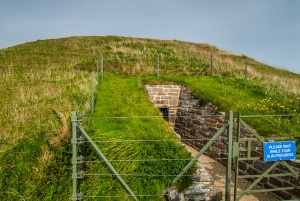 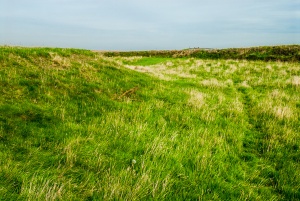 Nearby accommodation is calculated 'as the crow flies' from Maes Howe Chambered Cairn. 'Nearest' may involve a long drive up and down glens or, if you are near the coast, may include a ferry ride! Please check the property map to make sure the location is right for you.

More self catering near Maes Howe