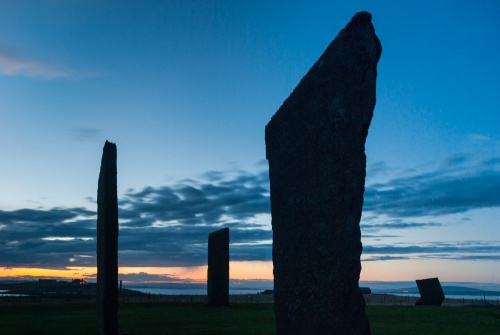 The Stones of Stenness at sunset

The Stones of Stenness is a Neolithic stone circle in a stunning loch-side location. Nearby are the Ring of Brodgar and Maes Howe chambered cairn.

Like the nearby Ring of Brodgar, the Stones of Stenness were built around 3000 BCE. Unlike Brodgar, however, Stenness contains very large stones, some standing to a height of 6 metres. The ring of stones was built inside an enclosing ditch and bank of about 44 metres (roughly 136 feet) in diameter.

A causeway in the north-east provided entry to the interior of the enclosure. This entry opens towards the Barnhouse Settlement a few hundred yards away on the shore of Loch Harray. There were originally 12 stones in the ring, of which only 4 remain upright. 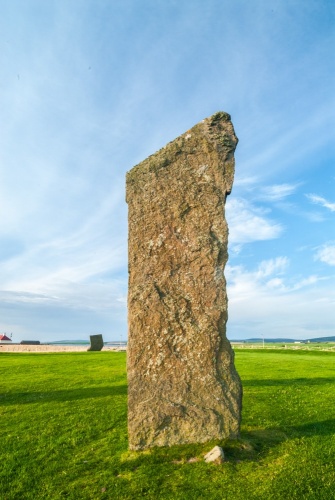 In the centre of the ring is a hearth, and between the hearth and the enclosure entrance were two small stones and a larger 'altar' stone. The most impressive thing about the largest stones - apart from their sheer height - is how slender they are. It scarcely seems possible that they could survive millennia without cracking apart, but they have.

Given its proximity to Maes Howe and the Ring of Brodgar, it seems likely that Stenness filled some kind of ceremonial role. There is a suggestion that at one time an avenue of stones stretched from Stenness to the Ring of Brodgar. This hypothesis is somewhat supported by the presence of several small standing stones in the yard of a farmhouse on the way to Brodgar.

Outside the circle, standing in solitary splendour by the shore of Loch Stenness is a monolithic stone called The Watchstone. At one time there was a smaller second stone beside the Watchstone, called Odin's Stone. This latter was destroyed by a farmer in the early 19th century, who was annoyed that visitors to the circle were trampling his crops. He destroyed the Odin Stone and pushed over another stone before angry locals threatened to burn his house if he did not stop.

The stones are on the east side of the B9055 close to the A965 junction, which is well signposted. There is a pull-by off the road which can take about a dozen cars. Alternatively, you could park at the Ring of Brodgar parking area about a mile away and walk back along the B9055 to Stenness.

Often overshadowed by its more famous neighbours, the Ring of Brodgar and Maes Howe, the Stones of Stenness is my personal favourite of the three sites. Part of the attraction is that you can wander among the stones, and really experience how tall the larger stones are. The location is fantastic, and if you stand beside the monolithic stones and watch the sun go down over the horizon you will never forget it. 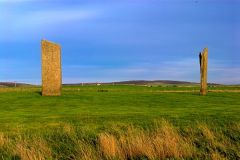 Nearby accommodation is calculated 'as the crow flies' from Stones of Stenness Circle and Henge. 'Nearest' may involve a long drive up and down glens or, if you are near the coast, may include a ferry ride! Please check the property map to make sure the location is right for you.

More self catering near Stenness

More bed and breakfasts near Stenness