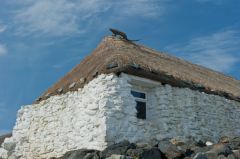 Berneray is not exactly well endowed with what normally passes for tourist attractions, but for a small island, there is still a lot to see. All of the sites listed here can easily be viewed in a day, or even an afternoon if you bustle, but for goodness sake, don't! The whole point of a visit to Berneray is to relax and unwind, and enjoy the beautiful scenery and the slow pace of life in the Western Isles.

MacLeod's Gunnery
Immediately before you reach the famed Berneray youth hostel stands a ruined medieval stone building. At first glance, it seems nothing more than a derelict barn, but when you look closer you see some fine stonework that gives a clue as to how impressive this building must once have been. This is The Gunnery, or, as it is often known, MacLeod's Gunnery, the oldest house on Berneray. The Gunnery was built by Sir Norman MacLeod, one of the most influential and important late medieval noblemen in the Western Isles.

MacLeod fought with distinction at the Battle of Worcester in 1651, upholding the royalist cause of Prince Charles (later Charles II). After the battle, MacLeod returned to Berneray and built The Gunnery for himself, a fact that is recalled by an inscribed marble slab stone above the doorway. Close to the Gunnery are a cluster of traditional Black Houses, some of which have now been restored and are inhabited once again.

Beinn a Chlaidh standing stone
Beinn a Chlaidh translates loosely as Hill of the Graveyard. It seems to have been a place of some significance, perhaps because there was a well on the hill known for its pure water. On top of the hill is the A Clach Mhor standing stone, a solitary stone 8 feet in height. The stone was erected during the Bronze Age, about 2,000 BCE. Nearby humps and bumps on the turf show where medieval monks built a small church, possibly on the site of an early Christian cell.

According to the information sign about Beinn a Chlaidh at the community hall, there is a sacred stone on the hill known as Cnoc Bhuirgh, on which is a depression in the shape of a human foot. This may possibly have been used as a coronation stone for Pictish princes. Its name would suggest this; it is called Leac an Righ, or 'flat stone of the king'. Alternatively, and to my mind even more unlikely, is the suggestion that it was used to crown the medieval Lords of the Isles.

MacAskill Monument
Angus MacAskill (Aonghas Mor Macasgaill) was a native of Berneray, the son of Norman MacAskill, who emigrated to Novia Scotia, Canada, in 1831, when Angus was only 6 years old. MacAskill grew to become one of the most celebrated 'giants' of his day, topping that chart at 7'9" in height. He was known for his feats of strength, and the 'Novia Scotia Giant' became so popular that Queen Victoria sought him out.

His prodigious size was not the result of any pathological defect or abnormality - he was just plain big! He was said to have the largest chest measurement of any non-obese man alive. MacAskill died comparatively young, in 1863, but he remains one of the most famous natives of Berneray.

In 1991 a memorial in memory of the Giant MacAskill was erected on the south-east shore of the island, between the burial ground at the West Beach picnic area, looking over the strait to North Uist. To reach the memorial, take the road past the Community Hall, to the picnic area parking lot. Walk straight on to the shore and you will see the memorial to your left (east).

West Beach
In a region known for fabulous beaches, West Beach on Berneray is arguably the finest. Stretching three miles from north to south, and taking up practically the entire west coast of the island, West Beach is an oasis of white sand, bordered on the east by Hebridean machair grassland. Though it is a superb beach, it is often deserted, and you may find yourself with the entire three miles of sand to yourself!

Though you can access the beach from almost anywhere on the island, probably the easiest way is to follow the sign for the community hall and carry on to the signed picnic area beyond that. From the parking for the picnic area go through the gate and follow the track west into the machair. The beach awaits!

Berneray Youth Hostel
The Berneray hostel must be one of the most picturesque places to stay anywhere in Scotland, if not in Europe. Two traditional thatched crofting cottages on the northeastern tip of Berneray have been renovated to serve visitors. The location is utterly superb, looking across the strait to North Uist and eastwards to Skye in the distance. It is hard to imagine a more picturesque setting for these historic whitewashed buildings. The hostel is administered by the Gatliff Hebridean Hostels Trust, a charitable organisation, and is part of the Scottish Youth Hostel Association. Website: http://www.gatliff.org.uk

Bays Loch seal colony
Lots of places in Scotland can boast seals, but few can boast a colony that is so easy to view, and even fewer can count on their presence enough to provide a purpose-built seal viewing area. But that is what you will find on the northern side of Bays Loch, where a colony of common and Atlantic grey seals can regularly be found sunning themselves on the rocks offshore. By all means, bring a pair of binoculars, but in truth, you don't need them as the seals are so close at hand that they are easy to see. Common seal pups are born in summer while Atlantic Grey pups can generally be seen in Autumn. The seal viewing area is immediately beside the road on the north side of the harbour.

Telford church
Built by the famed Scottish engineer Thomas Telford, this ruined church has two doors - one for the parishioners, and another for inhabitants of Pabbay, who rowed to Berneray for services. 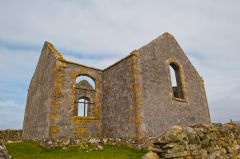 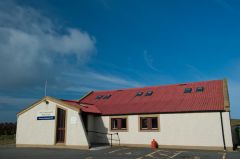 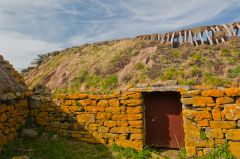 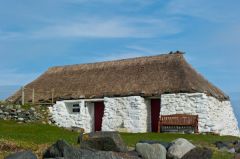