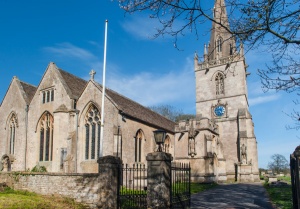 There was a church in Corsham before the Norman Conquest, and William the Conqueror granted it to the Abbey of Caen. The current St Bartholomew's church dates to the 12th century, and a Norman clerestory window can be seen high above the south aisle arcade.

The pillars at the west end of the nave still show rubble from the original Saxon west wall. The nave roof is 15th century, and you can see an amusing roof boss close to the west wall.

Rebuilt in its current form around 1465 by Thomas Tropenell of Great Chalfield, Steward to the powerful Hungerford family. Tropenell became a landowner in his own right and an MP. At the north eastern corner of the chapel is a table tomb to Tropenell's son Christopher, and it is interesting to compare the style of carving between the two. I'd say the father had more disposable income than the son!

The chapel is separated from the north aisle by a stone screen. This is quite unusual in a parish church, where most screens would have been of wood. Traces of two altars can still be seen on the outside (aisle side) of the screen. The most interesting feature in the chapel is Thomas Tropenell's memorial. Though faded now, it was originally brightly painted. Aside from the Tropenell tomb, the Lady Chapel has memorials to the Fuller family of Neston Park. 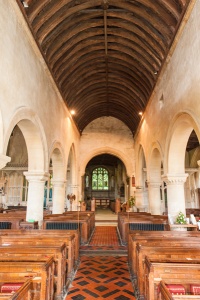 Built by the Methuen family of Corsham Court during the Victorian restoration. The transept served as the private family pew, and it contains three striking memorials. The oldest is to Alice Cobb (1627). The memorial was brought to Corsham from Adderbury, Oxfordshire, in 1899, and reassembled like a large jigsaw puzzle.

To the right is a memorial to Constance Methuen (d. 1849). Constance was just 2 years old when she died, and she is represented poignantly by a sleeping child.

The third memorial is that of Eleanor, Lady Methuen (d. 1958). Lady Methuen was a gifted artist, and at the foot of the memorial is a depiction of her at her sketch pad. The contrast between the three monuments, each from a different era, is very striking.

Between the north aisle and the Lady Chapel is a 17th-century chest protected by iron bands. There are only two locks out of the original three; we can assume that one key was lost so the lock had to be cut off. 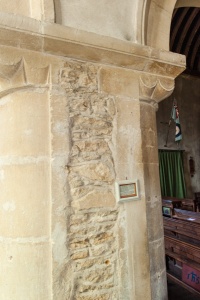 The easternmost bay of the chancel, now used as a sanctuary, is 15th century, but it was completely rebuilt in 1880 as a memorial to the first wife of Lord Methuen. The white marble angels are thought to have been carved in Lady Methuen's likeness.

The highlight of the chancel is the east window featuring superb stained glass by Victorian master CE Kempe (look for Kemp's familiar wheatsheaf symbol). The south chancel is separated from the south aisle by a stone screen meant to be a copy of the 15th-century screen opposite.

Beside the chancel is the vestry, used as a consistatory court. Above the vestry is a loft, once part of a rood loft, with some original painting still clinging to the wooden panelling.

Other interior features include the 15th century font, carved with Tudor roses. Over the doorway is a royal coat of arms to William and Mary. The south porch, by which you enter the church, is 15th century, and over the door is a mural tablet to William Tasker (d. 1684), who, we are told, chose 'to be a door keeper to the house of his God then to dwell in the tents of wickedness'.

There is an odd-looking 17th-century annexe to the porch built to house a stair to a gallery in the south aisle.

St Bartholomew's is a lovely historic church, with an abundance of interesting tombs. Well worth a visit, especially if you can combine it with Corsham Court next door, and the Corsham Almshouses about 5 minutes walk away. There is a small parking area outside the church, at the end of Church Lane. Usually open daylight hours. 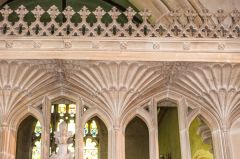 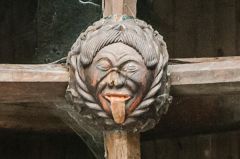 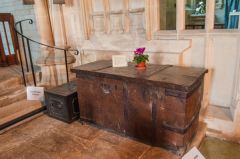 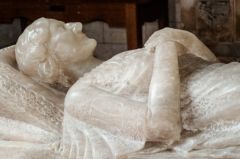 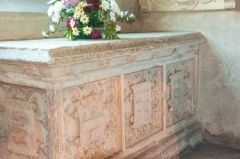 More self catering near Corsham

More bed and breakfasts near Corsham