HERITAGE HIGHLIGHTS:   1688 Schoolroom, unaltered since it was built 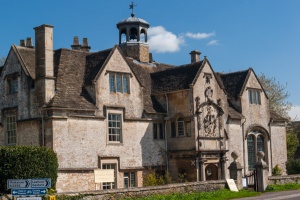 The Corsham Almshouses (sometimes called the Hungerford Almshouses after their founder) is a set of beautifully built 17th-century buildings meant to provide housing for 6 poor people and education for 10 poor children.

Lady Margaret Hungerford was the wife of Sir Edward Hungerford of Corsham Court, a commander under Oliver Cromwell during the Civil War. Sir Edward died before the end of the war, in 1648, and is buried at Farleigh Hungerford Castle, Somerset, also owned by the Hungerfords.

In 1665 Lady Margaret purchased a plot of land on the east side of the Great Turnpike to London, at the southern edge of her Corsham Court estate.

There she built six almshouses for poor people, along with a schoolroom for 'ten needy scholars', a Master's house, and several auxiliary buildings arranged around a small open space to the rear. The almshouses had a communal privy, a well, and small yards for storing fuel. 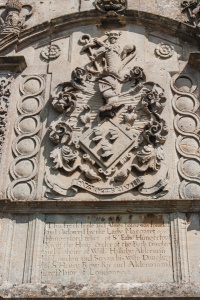 Lady Hungerford bestowed £60 per year of income from her estate at Stanton St Quinton to finance the almshouses in perpetuity, with £20 for the Master, £30 for the 6 residents, and the final £10 for building maintenance and for resident's gowns. The almshouses were finished in 1668, and were provided with their own gardens connected by a Pentice, or covered walk like a monastic cloister.

The Hungerford buildings are a complex rather than a single structure, laid out in an L-shape with the main front on the west, facing the road. Over the entrance is an elaborately carved dedication, bearing the coat of arms of Lady Margaret Hungerford. The text reads:

'This freeschool and almshouse was founded and endowed by the Lady Margaret Hungerford relict of Sir Edward Hungerford Kn. of the Hon. Order of the Bath daughter and Coheir of William Halliday Alderman of London and Susan his wife, Daughter of Sir Henry Row, Knight and Alderman and Lord Mayor of London.' 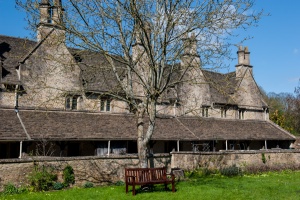 Lady Hungerford left very specific instructions on how the almshouses were to be run and laid out in no uncertain terms exactly what was to be expected of the Master and the residents. These instructions are outlined in 'Lady Margaret's 45 Ordinances', which is on display in a small exhibition area on the top floor. Also in the exhibition area is a heraldic pall used to cover coffins at funerals.

Failure to obey the ordinances could result in fines or expulsion from the residences. One of the Master's duties was to read these ordinances aloud to the residents at Michaelmas and Lady Day.

The first Master was Edward Wells, the vicar of St Bartholomew's church. Wells served from 1668-1677 and is buried inside the church. A subsequent Master was Edward Hasted, who wrote a voluminous History of Kent and was named Master in 1807, but without any teaching duties.

He died in 1810 and is also buried in St Bartholomew's church. The most famous pupil taught here was Richard Bethel, who showed such promise that he was transferred to Corsham School, then to Bath, and eventually rose to become Lord Chancellor and was named the 1st Lord Westbury. 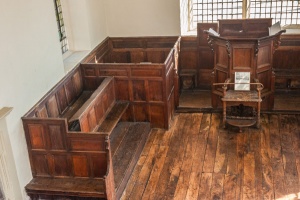 The Schoolroom from the gallery 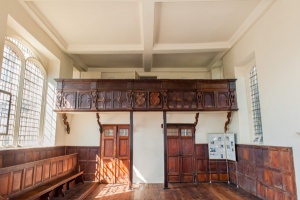 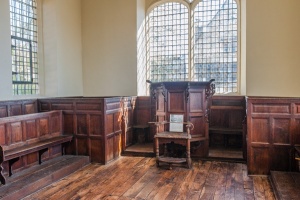 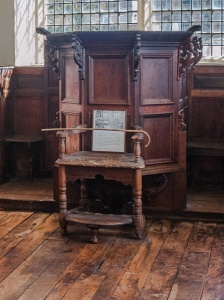 Swearing, gambling, dicing, playing cards, and drinking were prohibited. Residents had to mend their own chimneys and windows, weed their own gardens, and tend the common hedge which was used to dry clothes after washing. They all wore a robe with a silver badge and cross sewn on the left sleeve. Church attendance was required at either the parish church or the Great Mansion House, and for twice-daily prayers in the Schoolroom. 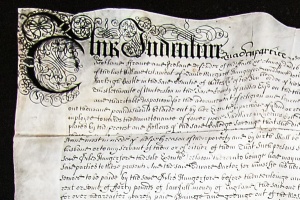 This is the real highlight of a visit. The schoolroom has been virtually unaltered since it was built in 1688. At one end, beneath a huge, mullioned window, is a Master's Pulpit (note, not a desk; the Schoolroom was used both for lessons and for prayers).

Below the pulpit is a chair with a long cane, used for keeping students in line. Desks for pupils and box pews still line the sides of the high-ceilinged room. At the opposite end from the Pulpit is a gallery, supported on lovely carved pillars. Lady Hungerford sat here when attending services.

I found the Almshouses fascinating. It is amazing how unchanged the buildings are, though a few of the ancillary buildings have vanished from the rear of the property, the almshouses are intact and still catering to residents.

Lady Hungerford's charity is still functioning, though there is no longer an active school, and the 45 Ordinances are no longer enforced! Its a shame we couldn't actually see inside the almshouse residences, but that's understandable as they are still being used.

We opted for a guided tour, and our guide was excellent. We learned so much about the history of the almshouses and how people lived. I would highly recommend a visit, especially if you can take the time to also visit Corsham Court and the nearby church of St Bartholomew. 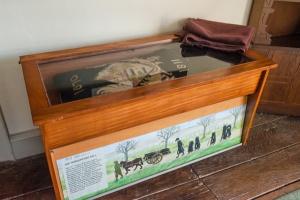 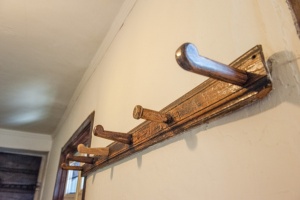 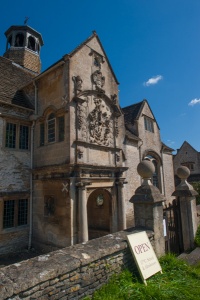 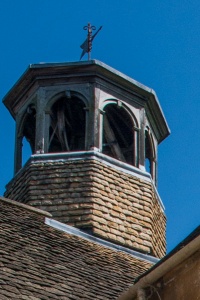 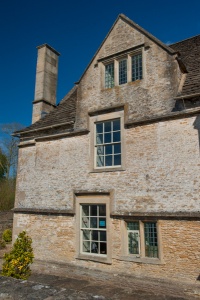 More self catering near Corsham Almshouses

Self Catering near Corsham