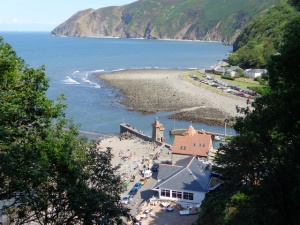 Lynton and Lynmouth are like twins, one village complementing the other. Lynmouth is wedged between a steep cliff and the ocean on North Devon's coast, while Lynton looks down from the 500ft (152m) high clifftop on her twin. The views from either are glorious. You can see, on a clear day, across to the Welsh coast.

But proximity is about all these twins have in common. Lynmouth is a traditional fishing village with stone houses, and Lynton is a Victorian-Edwardian village, many of its homes turned into seaside villas and hotels.

An unusual Cliff Railway connects the two villages. Two passenger-carrying "cars", connected by a cable, chug up and down the hill, each with a water tank capable of holding 700 gallons. At the top of the cliff one car's tank is filled, causing it to descend the cliff, while the car with a lighter, empty tank rises to the top. The full tank is emptied once the car reaches the bottom of the cliff, and then the process starts all over again.

This "railway" has a gradient of 1 to 1?--pretty steep. But not to fear. Since its opening in 1890, no accidents have occurred. And it's definitely the easiest way to travel between the two villages.

In Lynton a restored 16th-century house, St Vincent's Cottage, is now a small museum displaying the tools and products of past craftsmen. Take a look at the town hall with its attractive architecture, built by Sir George Newnes, who also built the cliff "railway". Lynmouth's 14th-century thatched smuggler's inn is now a hotel as is Tregonwell, a Victorian stone house built for a sea captain. 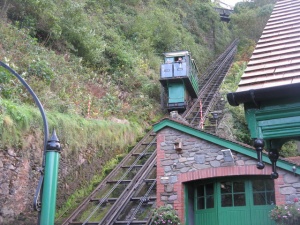 Nearby an 1832 fishing lodge, Watersmeet House, nestles in a beautiful tree-lined gorge at the confluence of the East Lyn and Hoar Oak Water. Have a cup of tea at the National Trust teashop here, and amble on paths under green canopied skies.

The villages owe their popularity as tourist destinations to Napoleon. Denied their usual continental holiday haunts because of the Napoleonic Wars, Britains sought out homegrown spots and found dramatic cliffs and coastlines here.

The poet, Shelley, stayed here for several months with his bride and named the area, "Little Switzerland". Wordsworth and Coleridge are other literary figures who found the area amenable for writing. It is said Coleridge was inspired to write "The Ancient Mariner" after viewing Lynmouth's harbour.

Lynmouth's men performed a heroic task in 1899 when they hauled a lifeboat 13 miles overland to Porlock to rescue the crew of The Forrest Hall, a ship foundering in the bad weather and stormy seas that prohibited the lifeboat launch at Lynmouth.

Tragedy struck Lynmouth in 1952. The rivers East and West Lyn flow to the sea in a deep cleft between the cliffs and that was the starting point for disaster when flood-swollen waters swept through the village of Lynmouth, hurtling mud and 40,000 tons of boulders and tree trunks on the unsuspecting inhabitants. Homes, roads and bridges were destroyed. Thirty-four people met a sad end.

Lynmouth and Lynton, on a heritage coast, are part of Exmoor National Park. Hikers can walk the Southwest Coast Path-which passes through the villages-from Minehead in the east to Combe Martin in the west.

Dramatic moorland covered with purple heather and yellow gorse vies for attention with rugged rocky coves demanding exploration. Nearby, buzzards and red deer hint at the wildness of the area. And stories such as Lorna Doone, of infamous fictional fame, set amidst the countryside, add to the legends of this land. 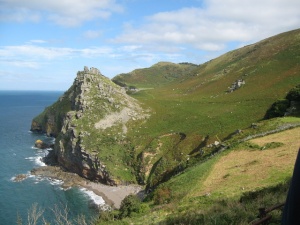 One mile (2km) to the west (you can walk it along the North Cliff Walk) is the Valley of the Rocks, a natural gorge between two ridges of hills. Here sandstone and shale fought unsuccessfully with the wind, and the result is such aptly named rocks as "Devil's Cheeswring" and "Ragged Jack". The rocks are playthings for wild mountain goats.

Essential Information:
Lynton and Lynmouth are on the A39, 18 miles west of Minehead. Exmoor National Park Authority's official website is located at http://www.exmoor-nationalpark.gov.uk/

©2000 by Barbara Ballard. Reproduction of this work in whole or in part, including images, and reproduction in electronic media, without documented permission from the author is prohibited.

More self catering near Lynton & Lynmouth 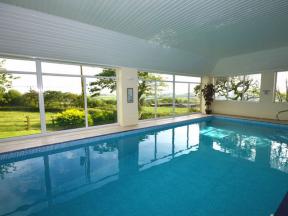 Located on the owners 700-acre dairy farm you will be able to enjoy a tranquil and relaxing holiday. Just over a mile away is the market town of Bideford with …
Sleeps 6 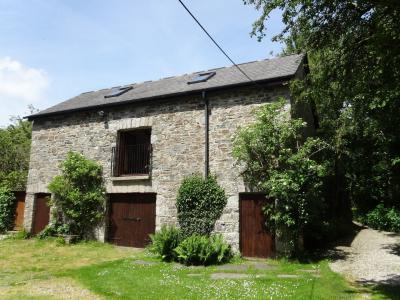 This elegant cottage has a grand piano, is close to National Trust's Lydford Gorge and can sleep two people in one bedroom.
Sleeps 2