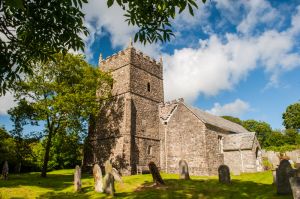 A country church on the edge of Exmoor. St Petrock's Church is of medieval origin, but the interior is a Georgian delight; a time capsule of 18th-century decoration and furnishings that have remained essentially unchanged since the Georgian period.

The entire building consists of a nave, south aisle, chancel, and south porch, with a three-story west tower. The church was founded in the Norman period by William de Falaise, to replace a simple Saxon building. The tower was added in 1182, followed by the chancel about 70 years later.

St Petrock's retains a very nice 15th-century rood screen, but the interior is more notable for its 18th-century fittings. These include the altar rails, a painted depiction of the Ten Commandments, box pews, and a set of raised seats for musicians. Parracombe is thought to be the last church in Devon to regularly utilise a group of musicians to support hymn singing. Of particular note is the three-tiered pulpit.

Parracombe church was at the centre of a national furore in 1879; the medieval building was found to be in a state of decay, and it was proposed to demolish the building and build a new church on the same site. This created a national outcry, with notable figures like John Ruskin calling for the church to be spared. The campaign was successful; St Petrock's was preserved, and a new church was built closer to the centre of Parracombe village.

As you enter the village of Parracombe from the south-west, you can easily spot a church tower in the heart of the village. Don't be fooled, as I was - this is not St Petrock's but its 19th-century replacement! Instead, watch out for road signs labelled 'Old Church', which guide you up narrow lanes that seem to take you out into the countryside before a church suddenly comes into view in a treed clearing.

The interior of St Petrock's is a delight; from a row of simple hat pegs to the box pews lining the nave and aisle, it feels like you've stepped back in time to the 18th century. Though the finely carved 15th-century screen is the oldest obvious historic feature apart from the font, it is the pulpit and tester that really catch your eye.

The underside of the tester is painted with a vivid sun at the centre of a blue sky ringed by clouds. Over the chancel arch are the painted Ten Commandments and a Georgian royal coat of arms. St Petrock's is an absolute delight, and thank goodness the Victorian campaigners like Ruskin were able to save it from destruction.

As I was leaving the church I paused by my car to soak in the atmosphere of this peaceful site. An elderly chap from the house across the road saw me and wandered over to make sure I wasn't lost. We got to chatting about the church and he told me that just the week before the box pews and all the woodwork had been treated with beeswax. 'Now it only looks 900 years old', he said, 'not one thousand!' 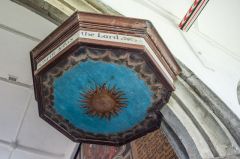 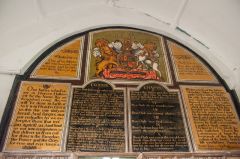 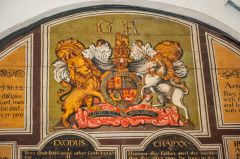 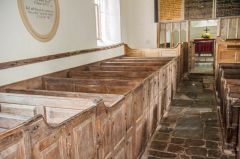 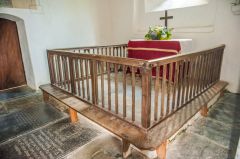 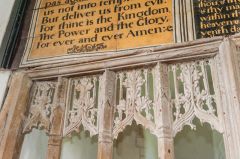