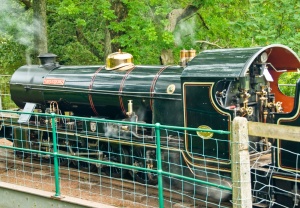 A shingle beach frames Ravenglass, in western Cumbria, the only coastal village within the Lake District National Park. The village, whose main street is paved with sea cobbles, sits where three rivers meet: the Esk, the Mite, and the Irt. The Drigg Dunes and Irt Esturary Nature Reserve, to the north, is home to a colony of black headed gulls.

King John gave Ravenglass a market charter in 1208. It enjoyed prosperity when slate, quarried from the Lake District was loaded on boats in the harbour, but its importance as a port ended when the Industrial Revolution claimed other places nearer the centre of manufacturing and industry. Ravenglass's port silted up. Long before that time, the Romans, Norse and Saxons made use of the port.

From AD 78 through the 3rd century, one thousand Roman soldiers occupied Ravenglass. It served as an important naval base, command centre and supply distribution point for the occupation of the northwest of England.

Little remains today of the Roman fort, called Glannaventa, except for the Bath House, known incongruously as Walls Castle. The structure, measuring 40 by 90 feet, with walls over 12 feet high, is one of the highest standing of Roman remains in England. The coast from Burgh-by-Sands to Ravenglass has been designated part of the Hadrian's Wall World Heritage Site. 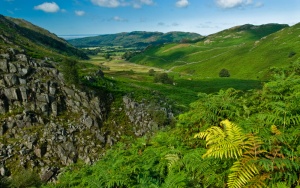 Today, the village is the home of the Ravenglass and Eskdale Railway, 'La'al Ratty', with its station, workshops, pub and museum. The museum shares with visitors the history and importance of the railroad in local life by using photographs, an AV show, and railway models. The old Furness Railway station is now the Ratty Arms, where bar meals are served.

The three-foot gauge railroad was built in 1875 by the Whitehaven Iron Mines to carry ore from Nab Gill, seven miles away, to the Furness Railroad at Ravenglass. Passenger fares helped keep the trains rolling when the mines failed in 1882.

Sadly, the railroad stopped running in 1913, but it was reopened two years later as a 15-inch gauge, carrying both passengers and granite from Beckfoot quarry. In 1960 the Preservation Society purchased the railroad that now provides a scenic ride for travellers and locals alike, using either steam or diesel engines.

Starting from Ravenglass the train makes a 40-minute journey, first skirting the bank of the estuary, then climbing along the flank of Muncaster fell to Eskdale, progressing to its terminus along the valley at Dalegarth, near the foot of Lakeland's highest mountains. Walks begin at various places on the line.

One of these is at the tiny village of Eskdale Green straddling the hillside above the railway. At Dalegarth (or the National Trust car park), walk to Stanley Ghyll Force, a 60-foot high waterfall in a dramatic, deep and narrow gorge. It's considered Lakeland's loveliest waterfall. 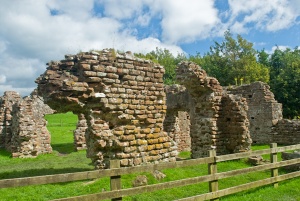 From the station at Dalgarth it's an easy 0.5 mile walk to the charming stone village of Boot, with its pub and Eskdale Mill. Cross over a 17th century packhorse bridge to the Mill. It dates back to 1578, but milling started in the valley as early as the 12th century. It's an unusual two-wheeled water mill, much of which is in working order. An exhibition explains the milling process and the workings of the wooden machinery. At one time the mill provided electricity for the entire valley.

Near Boot is the 12th century St Catherine's Church in a magnificent setting by the River Esk at the upper end of Eskdale. Note the marigold designs on the font and the stained glass windows-St Catherine is shown on the east window. 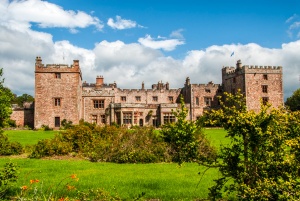 One of the train's stops (you can also drive there) is at Muncaster Watermill, a traditional village mill in operation since 1455. The mill, originally part of the estate of Muncaster Castle, gets its water supply from the River Mite. Once an oat mill, it now makes organic stoneground wheat flour using 'French burr' stones, a heavy stone that can grind a harder grain. A large pit wheel provides the power to drive the mill machinery. You can buy flour to take home or treat yourself to goodies in the teashop.

Historians believe Ravenglass's name came from one of two sources, either 'rengles', the 'lot or share of a man called Glas' or the Old Irish 'rann' plus a personal name. Wherever its name came from, the village and its railroad is the start of a scenic adventure through Eskdale, one of the quietest and most rewarding of Cumbria's dales.

Essential Information
Ravenglass is on the A595 between Barrow-in-Furness and Whitehaven. North Western Trains on the Lancaster-Barrow-Carlisle line connect with Eskdale trains at Ravenglass.

©2000 by Barbara Ballard. Reproduction of this work in whole or in part, including images, and reproduction in electronic media, without documented permission from the author is prohibited.

More self catering near Ravenglass

More bed and breakfasts near Ravenglass