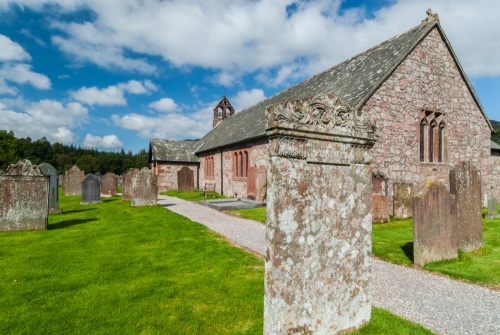 If there is a more beautifully situated church in Cumbria than St Catherine's, Eskdale, then I'd like to see it! This beautiful historic building stands on the north bank of the River Esk in the heart of Eskdale, far away from houses and under the distant gaze of Scafell Pike.

According to tradition, the first place of worship in this lonely spot dates back to the 6th century when a hermit lived here beside a well. The hermit was said to offer holy water from his well along with healing and prayers to anyone hardy enough to seek out his dwelling.

We are on much firmer historical grounds when it comes to the medieval building we see today. A stone chapel was built here around 1125 by William de Meschines, the lord of Egremont. That 12th-century church was owned by St Bees Priory. 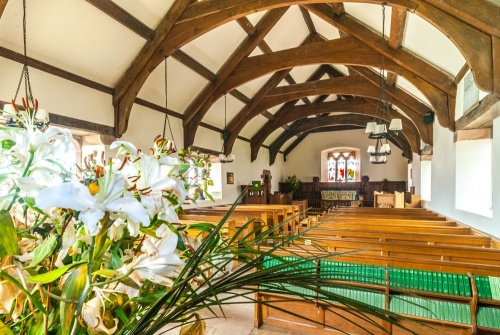 The 12th-century chapel was replaced by the present building in the 14th century. That medieval building was heavily restored in 1881 by the prolific Lancaster architects Edward Paley and Hubert Austin.

The church is a low, single-storey building of rubble under a slate roof. There is no tower, just a bellcote over the west gable and a cross above the east gable. Entrance is through a gabled south porch.

The east window survives from the 14th century but the rest of the windows date to the 19th-century restoration, with stained glass installed between 1889 and 1896. The east window depicts St Catherine, to whom the church is dedicated, with St Cecilia and the good shepherd. The north window depicts the Last Supper and the south window illustrates the Annunciation. 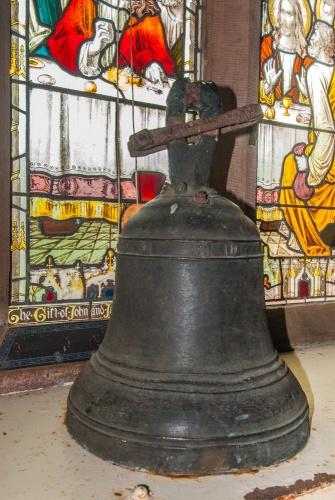 The font has a 14th-century bowl on a later stem. At least, that is the date given by English Heritage, but the architectural historian Nikolaus Pevsner puts the font bowl in the middle of the 17th century. The font bowl has a distinctive marigold motif decoration and a carving of St Catherine's wheel.

Other than the font bowl, the oldest church feature is a treble bell cast in 1445, now sitting on a window ledge on the north wall. In 1956 the bell was found to be damaged beyond repair and was replaced with a new treble bell given in memory of Piers Russell Rea of Eskdale (1925-1934). The 1687 tenor bell was recast at the same time and is still used today.

On the south wall is a benefactor's board dated 1798. The rest of the furnishings date to the 1881 restoration. 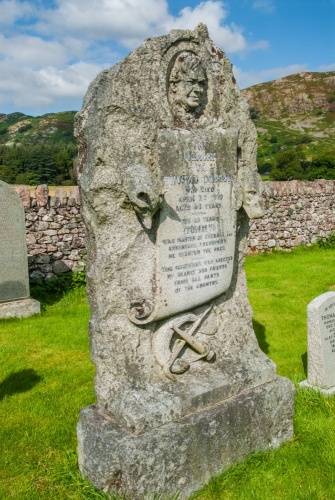 One of the most intriguing features of St Catherine's Church is outside in the graveyard, where you will find a striking memorial to Thomas Dobson (d 1910). Dobson was the Master of Eskdale and Ennerdale Foxhounds for 53 years. He was also responsible for establishing the pack.

The gravestone features a relief carving of Dobson's head in the centre of an oval, while below is a carved scroll with his epitaph flanked by relief carvings of a hunting dog head on one side and a fox head on the other. at the base of the scroll are a carved hunting horn and riding crop. 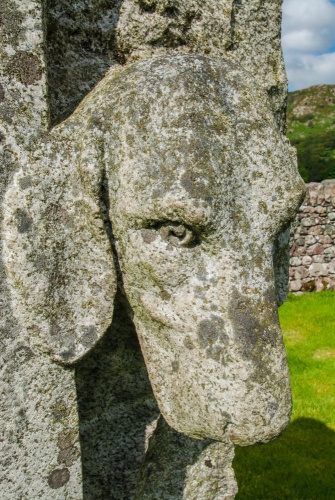 Carving of a hunting dog on
Dobson's memorial

As the saying goes, getting thee is half the fun, and that is certainly true in this case. There is parking at Dalegarth Station, the terminus of the Ravenglass and Eskdale Railway, so you can come by car or arrive in style by miniature railway.

From the station simply follow the road east towards the hamlet of Boot. You will come to a lane off to your right leading down to the church and the river.

Just beyond the churchyard is a set of stepping stones across the River Esk, which can be crossed only when the water level is low. Footpaths on the far bank lead up onto Birker Fell.