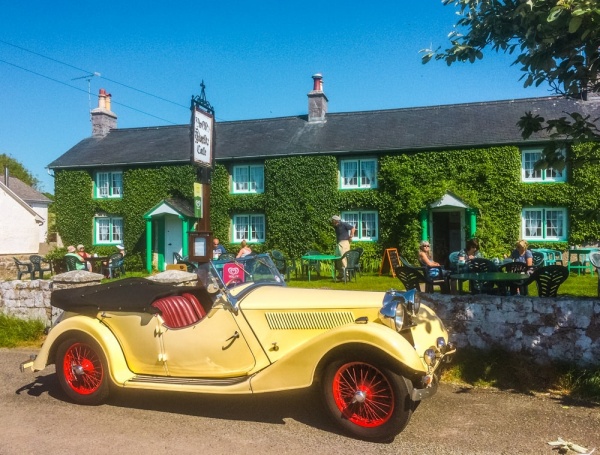 Mention the Pembrokeshire village of Bosherston and most people immediately think of the famous lily ponds that draw visitors in their thousands each year. But there is much more to this pretty little village than the lily ponds.

Let's deal with the name first; these are not ponds at all, but a series of three long lakes created in the 1760s when the Campbell family of Stackpole Court decided to dam valleys running down to the coast. The dams created long, slender lakes that proved to be a perfect environment for growing water lilies and are home to resident otters. The lakes are fed by underground springs, and cracks in the underlying rock allow water to flow freely and escape while new water flows in from the springs.

During June and July, the lakes are carpeted with white lilies, and boardwalks extend across the lakes to let visitors experience the brilliant display up close.

There are footpaths on both sides of all three lakes, and the trails extend to the National Trust's Stackpole Court and Walled Garden in one direction, and to Stackpole Quay in the other. The Walled Gardens was established in 1770 by Sir John Campbell. It has now been restored and is maintained by Pembrokeshire Mencap to provide meaningful work for people with learning disabilities. 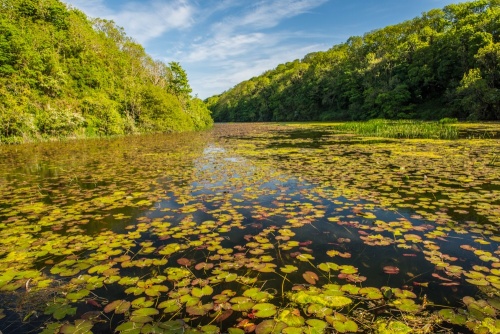 Just below Bosherston's pretty parish church, there is a large National Trust pay and display parking area with toilets. There are information panels outlining walks around Bosherston Lakes and beyond. It is just a short walk from the parking area to the first of the boardwalks, giving you a good look at the water lilies. I should add that the Bosherston Lakes area is incredibly scenic, and makes a wonderful place to add even when the lilies are not in season.

If you follow the trail from the far side of the first lake you come to the secluded beach at Broad Haven South, also owned by the National Trust. This is a magnificent expanse of pure white sand with picturesque rock stacks just offshore.

Though the Bosherston Lakes look completely natural they are really a carefully planned 18th-century picturesque landscape, a work of art on a massive scale.

Bosherston has a long history of links to the military. In 1938 the War Department purchased roughly one-quarter of the land in Bosherston parish and began using it as an RAC firing range. In 1940 the military bought more land to the south of the village and converted it into Castlemartin Tank Range. 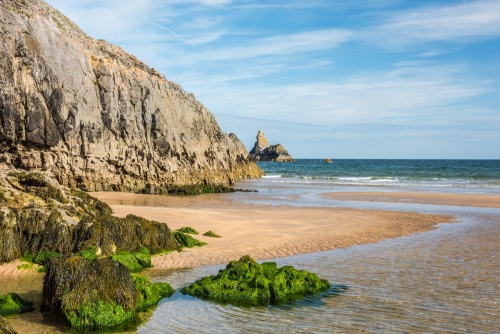 Immediately south of Bosherston, on the minor road to St Govan's Chapel, is a military checkpoint. If the range is being used for military purposes the checkpoint will be closed and you will have to make other plans. I showed up one day expecting to visit the chapel, and found the road closed.

The guard on the checkpoint was very friendly and told when they expected to reopen the road, which was handy in planning my return trip. Just be forewarned if you plan on visiting the coast for climbing or to visit St Govan's Chapel that the road is sometimes closed.

There are two places to put your feet up and relax after exploring the lily ponds. The local pub is the St Govan's Country Inn, a traditional pub. They serve a very good pint of cold cider; perfect on a long summer evening (I speak from personal experience!).

Beside the pub is the picturesque ivy-lad tearoom, the Ye Olde Worlde Cafe, where you can enjoy tea and refreshments on the lawn. 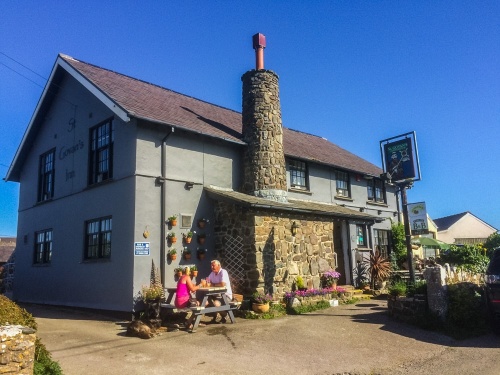 Just a few steps from the lily ponds parking area is the medieval parish church of St Michael and All Angels. The church dates to the 13th century but it stands on - and may incorporate stone from - an earlier Norman building. In the north transept is a very worn effigy of a woman, thought to commemorate the Dowager Duchess of Buckingham. In the south transept is an effigy of a 14th-century knight. In the churchyard is a medieval preaching cross with an unusual carved face in the centre of the cross. 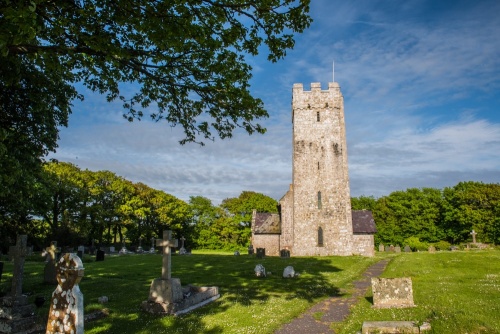 Tucked into the rocky cliffs south of Bosherston is St Govan's Chapel, a fascinating medieval church on the site of a 6th-century hermit's cell established by Govan, an Irish monk. Govan hid from pirates in a cleft in the rock, and after his escape, he built a simple hermit cell and preached to the local inhabitants.

A holy well stands just below the chapel, and Govan is said to be buried beneath the stone altar. A more fanciful legend says that Sir Gawain of King Arthur's court lies buried under the altar. It seems likely that the legend arose because of the similarities in the names of Govan and Gawain. 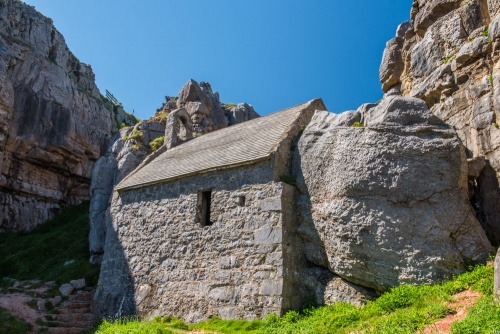 Bosherston is a popular destination for rock climbers. The cliffs along the rocky coastline nearby are some of the best in Wales and there are literally thousands of climbing routes along the coast. One of the most popular climbs is at Huntsman's Leap, near St Govan's Chapel.

Bosherston is an incredibly satisfying place to visit. The Bosherston Lakes are one of those places you want to keep coming back to again and again.

More self catering near Bosherston

More bed and breakfasts near Bosherston