HERITAGE HIGHLIGHTS:   Thought to have formed part of a ceremonial gathering place 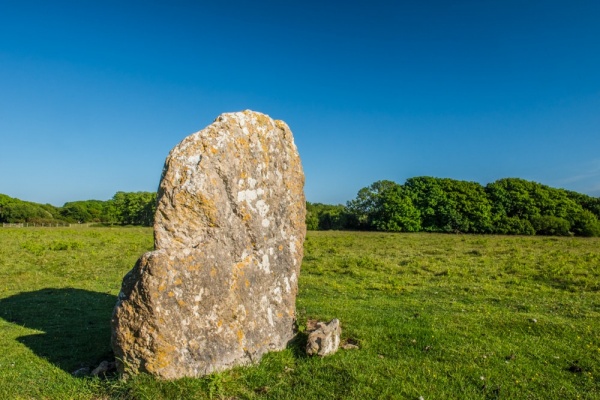 The National Trust owns vast swaths of the Pembrokeshire coastline, taking in some of the most spectacular scenery in Britain. One of the jewels in the Trust's crown is the Stackpole Estate near Bosherston, famous for its lily ponds that form part of an 18th-century picturesque landscape. But there are much older attractions on the Stackpole Estate, among them the standing stone known as the Devil's Quoit.

The Devil's Quoit is also known as Stackpole Warren Stone, or Harold's Stone after Harold Godwinson, the last Saxon king of England. It is one of the Dancing Stones of Stackpole, three ancient standing stones said to meet at Saxon's Ford on a certain day each year, where they dance until dawn to a tune played by the Devil on his flute, before resuming their stations.

The stone is 1.7m tall, 1.5m wide, and 0.4m thick, in the shape of a rounded rectangle with a distinct step, or shoulder on one side. It is thought to stand on the site of a circular timber structure that burnt down around 1395 BC. Though it now stands alone, the stone is thought to have formed part of an arrangement of smaller stones. About 940 BC a cremation burial was added to the earlier monument. The site was reused in the Iron Age and Romano-British period.

The stone was originally thought by archaeologists to mark a burial site, but it is now believed that it marked a communal gathering place or ceremonial centre. It was probably erected about 3000 years ago during the Bronze Age. 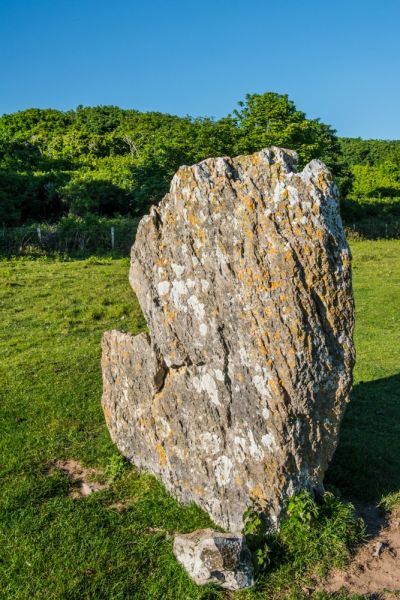 The stone from the south-west

There are three ways to reach Devil's Quoit; two start from the National Trust parking area at Stackpole Quay and the other from the Trust's parking area at Bosherston. I've walked both directions and can report that the Stackpole Quay route is quicker, but not so easy to follow, while the Bosherston route takes longer but passes through absolutely stunning scenery including the famous lily ponds.

The National Trust kiosk at Stackpole Quay has handy maps of the Estate but the maps don't do a good job of showing the route to the standing stone. One option is to follow the well-trodden trail to Barafundle beach, but rather than going down to the beach angle right along the edge of the dunes until you reach a stand of woods. Follow the edge of the woods for about half a mile until you see the stone ahead.

A much easier option is to take the trail heading north-west from the parking area at Stackpole Quay towards Stackpole Court. After 1 mile a trail branches off to the left towards a wide stand of trees. Follow the trail through a gate, pass through the trees until you emerge at another gate. The stone is easy to spot off to your right, roughly parallel to the edge of the woodland.

The longest walk, and the most interesting, starts from the Bosherston Lakes parking area. Cross over the boardwalk across the famous lily ponds, turn right to follow the trail to the end of the peninsula where a footbridge crosses an arm of the Bosherston Lakes. Stay on the trail as it heads north along the third lake to the Eight Arch Bridge, built in 1797 to link Stackpole Court to Stackpole Quay and the New Deer Park. Cross the bridge and take the obvious trail straight ahead.

The trail emerges onto open ground, bounded by electric animal fences. Carry straight ahead to an obvious trail branching off to the right towards a wide stand of trees. Go through the gate into the woodlands, follow the trail to the far side of the woods, and go through the gate on your right. You will see the standing stone straight ahead, parallel with the woods.

NOTE
Don't mistake this Devil's Quoit with another standing stone of the same name just a few miles to the north-west at the hamlet of Sampson, just off the B4319 to Marrion. Just to be confusing, both stones form part of the Dancing Stones of Stackpole mentioned above, along with the Harold Stone. 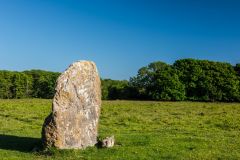