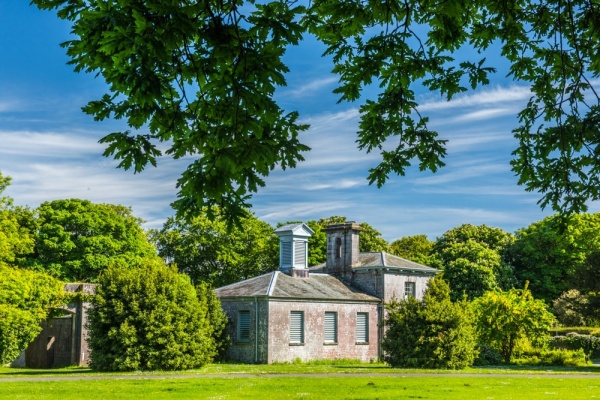 The National Trust's Stackpole Estate hugs the spectacular Pembrokeshire coast and includes some of the most beautiful landscape in South Wales. At the heart of the Estate is the site of Stackpole Court, an 18th-century stately home demolished after WWII. In the woodland near the site of the house is the historic 18th century walled garden, now restored and open to the public.

The Lorts were Royalists in the Civil War and as a result of their support for King Charles Parliament besieged Stackpole, forcing them to surrender after a short siege. After the siege, Robert Lort hid in caves at Barafundle until it was safe to emerge. He was rewarded for his loyalty to the Crown when Charles II made him a knight after the Restoration of the Monarchy in 1660.

The family fortunes looked up when Elizabeth Lort, the family heiress, married Alexander Campbell of Cawdor in 1689. In 1735 the Campbells built a Palladian mansion on the foundations of an earlier fortified manor house. They called their fashionable new home Stackpole Court. 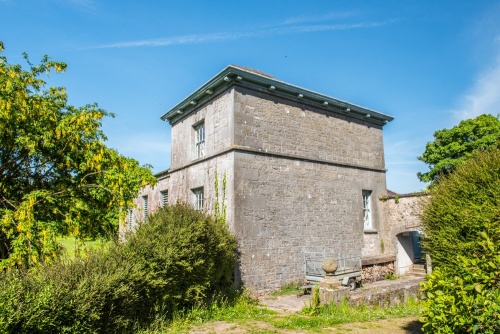 When Sir John Campbell II inherited the estate in 1777 he embarked on a sweeping programme of landscape gardening, using the Stackpole Estate as a vast canvas to create a picturesque design of trails winding through woodland and beside long lakes formed by damming the valleys near his home. The dams created Bosherston Lakes, home to a brilliant display of water lilies in summer.

In 1797 Sir John led the Castlemartin Yeomanry to defend Fishguard against a French invasion - the last invasion of mainland Britain. Some 1200 French sailors were captured. Sir John celebrated his victory by holding a feast, but the hungry French prisoners ate his horse.

The 1st Earl of Cawdor had the Georgian house enlarged in the 1840s, asking architect Jeffry Wyattville to create a palatial stately home in a magnificent pleasure ground.

Like so many stately homes Stackpole Court suffered in the early 20th century as the expense required to run the estate proved impossible to maintain. The decline was hastened in the buildup to WWII when the Ministry of Defence requisitioned 6,000 acres of land, nearly half the estate, to create Castlemartin Firing Range.

During the war itself soldiers were billeted at Stackpole Court. The soldiers stole the lead from the roof, allowing rain to enter, and as a result, the house suffered from terrible dry rot. After the war ended the Campbells decided to move back to their Scottish estates and leave Stackpole for good.

The once-beautiful Georgian mansion was pulled down in 1963 and the stone was used to build the Milford Haven oil refinery. The estate was broken up and sold in pieces, but the woods, lakes, and coast passed to the care of the National Trust.

Very little remains of Stackpole Court beyond outbuildings including the estate brewhouse, dairy, and game larder. The stable block has been converted into apartments, while the old dairy houses a display on the history of the Court and the estate. The exhibition includes photographs of the Victorian mansion, including the conservatory, made to look twice as long as it really was by the use of cleverly placed mirrors.

The architect's drawings reveal that the estate laundry building stood four storeys high, with servant's quarters on the top floor. Legend has it that the Campbell family sent their dirty clothes all the way from their Scottish residence at Cawdor Castle to be washed in the Stackpole Court laundry.

Beside the Dairy is a viewing point looking over Bosherston Lakes, where trails lead along the waterway to Eight Arch Bridge, built in 1797 to link the house to the deer park and Stackpole Quay. 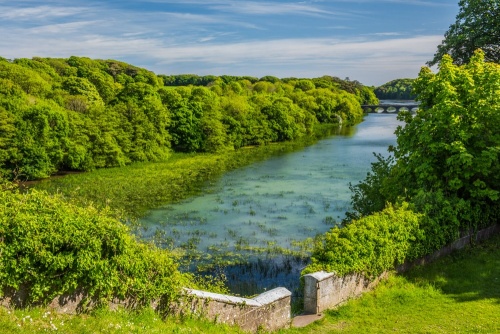 From the site of the Court, another trail leads to the 6-acre walled garden built around 1770 by Sir John Campbell to grow food for the residents of the Court. We don't know exactly when the garden was laid out but it is depicted on an Estate map drawn in 1782. The garden was laid out in an unusual D-shape and used heated sunken beds to grow exotic luxury goods like dwarf figs, pineapples and melons. Estate records show that by 1791 the garden was maintained by a head gardener with 14 men and 4 women under his command.

The original 1770 garden was contained within a high perimeter wall of brick. Sometime before 1818 a 'hot wall' was erected down the centre of the garden, dividing it into two distinct areas. A neoclassical arch in the dividing wall gave access to the two garden areas.

On the north side of the dividing wall, a pair of Regency style pavilions were built, with space for storing seeds and garden produce above ground. Each pavilion had a partially underground chamber with brick-vaulted ceilings and fireplaces that fed hot air through a system of flues in the wall. So the wall was quite literally a 'hot' wall, creating a space where exotic plants could be grown.

The upper pavilion chambers could have been used as accommodation by journeyman gardeners, and the fireplaces served the dual purpose of keeping the gardeners warm and providing heat to ranges on the south face of the wall where peaches were grown.

Just a few years later two smaller garden areas were added, with stone walls. In 1815 an underground boiler house was built, powered by coal. The boiler fed hot pipes that ran underneath forcing pits used to grow melons. The boiler house underground chamber is now a habitat for Greater Horseshoe bats. One of the pits was used to cultivate strawberries and seakale. 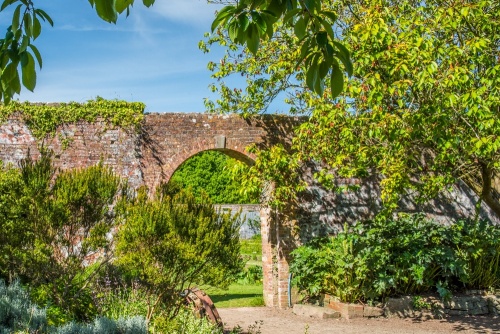 By the late Victorian period large glasshouses were added on the south face of the dividing wall. More glasshouses against the south wall provided 8000 sq ft of growing space and were used mainly as vineries, but also for growing carnations for the Campbell family. Water flowing off the glasshouse roofs was collected in two large underground reservoirs, one of which remains today.

After Stackpole Court was torn down the walled garden continued in operation as a market garden. In recent years it has been used by the charity Pembrokeshire Mencap, providing work and learning opportunities for adults with learning disabilities. There is a very popular cafe in one corner of the garden, and a very good system of information panels explaining the history of the garden and of the Stackpole Estate in general.

On the south side of the dividing wall is a sensory garden decorated with unusual sculptures including a mosaic crocodile and a metallic pyramid.

Just inside the garden entrance is a wisteria vine planted in the early Victorian era, and just outside the garden wall is the head gardener's cottage, built in 1782. 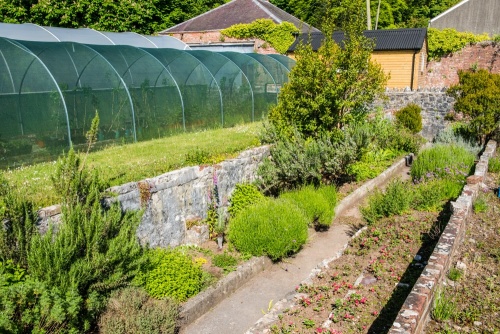 The easiest way to visit the Court site and the walled garden is to use the National Trust parking area at Stackpole Court. There is a very good system of signposted trails leading to the Court and Dairy exhibition in one direction and the Walled Garden in the other. The parking area is west of Stackpole village on the minor road to Bosherston. From the parking area, you can also follow trails south to Bosherston Lakes and lily ponds. 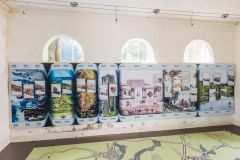 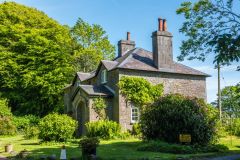 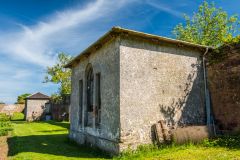 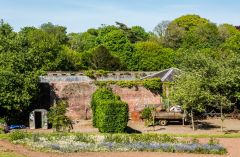 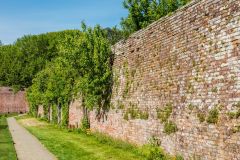 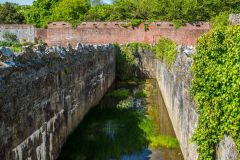