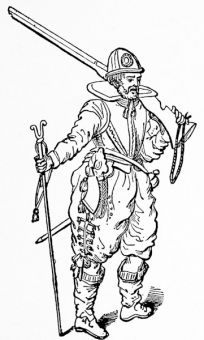 When Elizabeth died the ruler of Spain was Philip III, the son of Elizabeth's great antagonist. In France Henry IV had established a substantial degree of religious toleration by the Edict of Nantes, which conceded freedom of worship to the Huguenots, although the Government was officially Catholic.

Germany
In Germany for half a century the principle had been broadly recognised that in each principality the prince recognised that form of religion which was acceptable to himself. None of the emperors had professed Protestantism, but they had not pressed forward the papal cause against the reformed religion. On the other hand, the reformed states were divided between Calvinists and Lutherans, who were hardly less hostile to each other than to the papacy.

The Low Countries
In the Netherlands the contest with Spain had reached the stage at which it was all but certain that the Northern Protestant United Provinces would secure their independence, while the Southern Catholic Provinces would remain attached to the Spanish dominion. Spain was still looked upon as the aggressive champion of Catholicism, and neither she nor the world had yet realised her funda­mental weakness or awakened to the fact that the Austrian, not the Spanish, Hapsburgs constituted the real menace to Protestantism.

The keen political instinct of Henry IV did indeed recognise the growing danger to Europe of a coalition between the two branches of the house of Hapsburg; but his schemes for an opposition League were destroyed by his assassination in 1610, the year following the formal suspension of hostilities between Spain and Holland.

The recognition of Ferdinand of Styria as heir to the Emperor marked the approach of an aggressive Catholic policy. The kingdom of Bohemia, which for some time past had been attached to the house of Austria, claimed that its monarchy was elective and chose for its king the Protestant Elector Palatine Frederick, instead of Ferdinand.

The Thirty Years' War
Ferdinand asserted his own claim, and so in 1618 began the Thirty Years' War, a struggle mainly between the Protestant and Catholic states of the Empire, in which the Scandinavian Powers also became involved, Spain, too, intervening on behalf of the Hapsburgs. In France the accession of a child, Louis XIII, had put the government into the hands of a regency, and that country became entirely absorbed in party factions and intrigues among the nobles, until the young king assumed the reins of government, and called to his aid the great minister Cardinal Richelieu, whose ascendency dates from 1621.

It became Richelieu's business to carry on the suspended work of Henry IV by establishing the supremacy of the Crown over the nobles in France, and directing an anti-Hapsburg foreign policy. As matters stood, the most troublesome of the nobles were also Huguenots; and thus the civil broils in France assumed superficially the appearance of a religious struggle, although in essence it was political.

The relations of England with Spain, France, and the Palatinate, between 1618 and 1630, were the main cause of the financial difficulties which, along with the religious difficulty, brought Crown and parliament in England into direct hostility. After that date the domestic discords practically prevented England from taking any part in Continental affairs until after the Commonwealth was established.