The Accession of James I 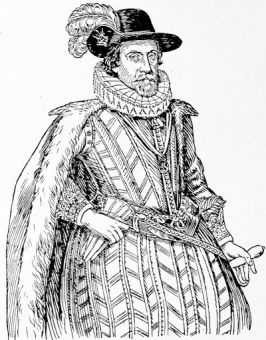 James I, from a contemporary engraving

The accession of James VI of Scotland to the throne of England as the legitimate heir of Henry VII and his wife united at last the Crowns of the two kingdoms, which for centuries had looked upon each other as foes even when their relations were formally friendly. Technically under the will of Henry VIII, which had never been formally set aside, Lord Beauchamp, the son of Catherine Grey and of the Earl of Hertford, was the heir, because Henry had postponed claims through his elder sister Margaret to claims through his younger sister Mary.

James I, like Henry VIII and Edward VI, could definitely claim to represent by seniority of descent the house of Plantagenet. That was a claim which neither Henry VII not Richard III, nor any member of the house of Lancaster had been able or assert. Nor could the title be challenged on the ground that descent through females was invalid, because there was no one living who could profess descent in unbroken male line from the royal house.

The English people could no doubt assert that they had never recognised an indefeasible title to the throne on the part of a monarch, and had always claimed the right to divert the line of succession; but it remained open to James to assert that all such diversions had been de jure invalid. He had become king de facto by consent of the nation; no one else could claim to be king de jure on any principles whatever; but he could also claim to be king de jure, irrespective of national consent, by the immutable law of succession by Divine right, as the lineal descendant of William the Conqueror and the lineal representative of the house of Cerdic.

The assumption was harmless, so long as the king in practice consented to be bound by law and precedent; the trouble arose when kings refused to be so bound. The theory of Divine Right was for the first time asserted by James, but he did not carry his insistence upon it to the extreme point in practice. Hence the great collision between Crown and parliament was deferred to the reign of his successor.

Nevertheless, it was James who set the ball rolling. The claim that the Crown was bound by precedent not of right, but only of grace, entailed not only the stubborn assertion by parliament of the contrary principle but also its interpretation of precedents in a sense which would have been emphatically repudiated by the Tudors; with the result that royal prerogatives hitherto unquestioned were challenged and abolished, and finally the succession was diverted into a new line which could not pretend to rule by any higher title than the national consent.

The British people is not given to concerning itself greatly with abstract theories until they are applied to practical questions in a tangible manner. On the basis of the new theory the Crown sought to assert rights of arbitrary taxation, arbitrary control of re­ligion, and arbitrary imposition of penalties. By exceeding its prerogative, or powers established by precedent, it caused those prerogatives to be challenged. Hence it became clear that they must either be extended so as to make the Crown decisively predominant over parliament, or curtailed so as to make parliament decisively predominant over the Crown.

The battle cost Charles I his head; but the republic which replaced the monarchy took the form of a Military Dictatorship as arbitrary as any monarchy. The monarchy was restored with the royal prerogatives curtailed; but the renewed attempt to establish absolutism brought about the expulsion of the Stuarts and the retention of a monarchy under conditions which precluded the possibility of a revival of the claims of the Crown.

The history of the Stuarts down to what the Whigs called the "Glorious Revolution" of 1688 is not concerned exclusively with this great constitutional struggle; but that struggle entirely occupies the foreground., The first great phase of it extends over the whole period from 1603 to 1640, and accordingly it will be here treated continuously in a single chapter instead of being arbitrarily divided at the moment of the accession of Charles I. As a preliminary we shall review the conditions out of which the contest arose, and by which it was affected.

We shall find that the antagonism between Crown and parliament arose primarily out of two questions, taxation and religion. The religious question was the outcome of the growth of what is called Puritanism in England, and the question of taxation was made acute by the foreign policy of the Crown. We shall therefore in the first place outline the European conditions which indirectly helped to force on the constitutional struggle.