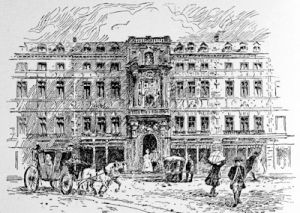 The old Mercer's Hall, where the Bank of England was first established

The system of national finance occupies a prominent position in the history of the seventeenth century, since for some three-fourths of the period it is a primary factor in the relations between the Crown and the parliament.

It is at the very root of the constitutional struggle; not because the people were afraid of being tyrannically taxed beyond endurance, not because they grudged money for public purposes, but because they recognised that the control of the purse ultimately entails the control of policy. But since this constitutional struggle is itself the leading feature of the period to a much greater extent than at any other time in our history, national finance in its connection with that struggle has already been dealt with and requires little further elucidation.

In effect the out­come of the long fight was that the Restoration separated the personal in­come of the king from the public revenue of the kingdom which had hitherto been identified with it The regular revenue was appropriated to particular objects, while for all other objects additional revenue had to be voted by parliament; and in the course of the reign of Charles II the principle was finally laid down of appropriating the expenditure to the specific object for which the supplies had been granted.

Excise Tax
Except in one particular the sources of supply remained the same as in the past. The parliamentary votes were concerned mainly with the "subsidies," to which each locality was called upon to contribute in proportions fixed by an exceedingly antiquated assessment. Variations in the duties at the ports were controlled not by the desire to increase revenue from that source, but to encourage or discourage particular trades.

The one new source of revenue was the invention of the Long Parliament, or, more accurately, was borrowed by them from the Dutch. This was the excise, a tax primarily imposed upon the home production of alcoholic liquors. Unpopular as this novel tax was, it was too productive to be given up, although there was no further extension of its principles.

But revenue had hitherto been provided on what may be called ready-money principles, on the hypothesis that the year's expenditure was to be met out of the year's revenue. Kings in the past had occasionally run heavily into debt, sometimes with disastrous results, or the lenders, as in the case of Edward III and Henry VIII, who met their difficulties by re­pudiating their obligations.

But in general the Treasury borrowed only to meet the immediate expenditure which could not await the collection of the revenue; when the revenue was collected the debts thus incurred were paid.

In the days of the early Plantagenets the principal lenders had been the Jews; when the Jews were expelled from England the kings borrowed chiefly from the Lombards, at a later stage from the Germans, and then, with the great development of English wealth, from the London merchants and especially the goldsmiths. But the risks which still attended this method were demonstrated by the Stop of the Exchequer in 1672, when the Government suspended repayment to the goldsmiths.

Monopolies
The Crown in the past had supplemented its revenues, much to the disgust of the general public, by the sale of monopolies. Private monopolies were abolished before the Civil War but the monopolies of the great companies were increasingly valuable sources of revenue. Thus we have seen the Government in 1698 obtaining a couple of millions as the price for bestowing a monopoly on the new East India Company.

Here, we may remark in passing, lies a striking difference between the English enterprises of this kind and those of France. The English company bought its privileges from the govern­ment by substantial subsidies; the French company was a creation of the government, not of private enterprise, and was run by the government generally at a loss.

Introduction of the Land Tax
But, in fact, England had entered upon a period of foreign wars, whose expenses the normal sources of revenue were not capable of meeting. The vigorous and impressive foreign policy of the Commonwealth had almost reduced it to bankruptcy. After the Restoration, the Dutch war, coupled with the gross misuse of the public funds, had so emptied the Treasury in 1667 that half the English fleet had to be laid up, and the Dutch sailed up the Medway.

The determination to embark on another Dutch war brought about the Stop of the Exchequer in 1672. And when the Revolution sucked England into the vortex of the European complications, it became increasingly impossible to meet the heavy demands for military and naval purposes out of an annual revenue derived from the established sources.

A formerly rich area which had become poor still paid its old proportion, and therefore reached the limit of endurance much sooner than a stationary area, while a poor district which had become rich was still only lightly burdened. The limit of taxing was set by the paying capacity of the most heavily burdened of these three groups.

A redistribution of the burden under a new assessment would obviously enable a much larger revenue to be collected without hardship. So in 1692 a new assessment was made, under which it was estimated that a tax of one shilling in the pound would produce approxi­mately half- a million. As a matter of fact the burden fell almost entirely upon the land, owing to the extreme difficulty of arriving at any tolerable assessment of the value of other kinds of property. From this time forward the land tax became the main source of revenue.

Bank of England and the National Debt
But even when the land tax was as high as four shillings in the pound, when it produced a couple of millions, war expenditure outran the annual revenue. The land tax of four shillings in 1692 provided a million less than was required. The solution of the problem was found by Charles Montague, afterwards Lord Halifax, in the creation of the National Debt.

A loan of a million was invited, but the lenders, instead of being paid off at an early date, were to receive life annuities. Thus the annuity would be an annual charge on the Exchequer, steadily diminishing as the annuitants died off. Two years later the principle of borrowing was further extended by the creation of the Bank of England.

The Government called for a loan of a million and a quarter. Interest was guaranteed on the amount, and was secured on an increase in the Customs. From the subscriber's point of view the subscription was simply an investment. He was certain of his interest, and if he wanted to recover his principal, he would have no difficulty in finding some one else willing to take his place. The subscribers were incorporated as the Bank of England, a company whose business was not commercial but exclusively financial.

It is to be observed that the creation of the National Debt provided a powerful guarantee against the development of Jacobitism. The commercial classes, from whom most of the money was borrowed, inevitably felt that a Jacobite restoration might mean a repudiation of the National Debt. That fear kept the solid mass of vested interests on the side of the Protestant succession, and tended to keep it on the side of the Whigs, because the Whigs were more decisively bound to the Protestant succession than were the Tories, although the bulk of the Tories were by no means Jacobites.

Currency Reform
The real ease with which the country was able to bear an enormous financial strain without suffering was further demonstrated by the reform of the currency in 1696. The coinage had been deliberately and shamelessly debased in the twenty years preceding the reign of Elizabeth.

Its restoration had been one of that queen's first measures; and since that time the standard of the coins issued from the Mint had been maintained. But the coin in circulation had been clipped and defaced till most of it was very much below the face value. According to the recognised law, it was the debased coins that remained in regular circulation. The effect on foreign exchange was disastrous, and trade was hampered.

The Goldsmiths' Fight Back
Yet with the war actually in progress the Government faced the problem of calling in the defective coin and replacing it with a currency of full value and not liable of clipping. The whole cost was borne by the State. In spite of the great quantity of coin called in and the long time required for replacing it with the new coins, trade was not seriously disturbed.

The moment was seized by the numerous enemies of the Bank of England to make an attempt to ruin that body. The goldsmiths bought up the Bank paper and presented it for payment in specie when the Bank cellars were drained. The Bank, however, treated the demand as a conspiracy, which it actually was, and refused payment, though it met all bona fide claims as fast as the Mint could provide it with money. The conspiracy defeated itself, and the Bank emerged from the crisis stronger than before.