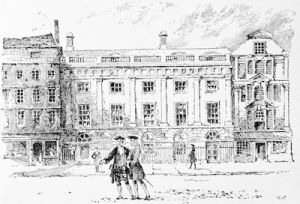 The old East India House, drawn from an old print by Herbert Railton

During the last third of the seventeenth century the French entered the field as rivals of the English and Dutch. This was the era in which, under the influence of Colbert, France developed her greatest maritime energy, and the French East India Company was started in 1664.

Hence in the ensuing century the French, not the Dutch were the rivals who attempted to monopolise the Indian trade and dreamed of a European ascendency India; it was the French whose defeat gave the British the ascendency which was gradually to expand into Empire.

But even in the seventeenth century there were Englishmen in India who were conscious of the instability of the Mogul Empire; and a French observer expressed his own belief that a Turenne with twelve thousand men could conquer India. As a matter of fact that was very nearly what had been done by Babar, the founder of the Mogul Empire, when Henry VIII was reigning in England.

English governors, prematurely contemptuous of an empire which was as yet only on the verge of utter disintegration, ventured to levy war in support of their demand for the redress of griev­ances. The English factories would have been wiped off the face of India if the Emperor Aurangzib had not feared that English ships would cut off his faithful Mohammedan subjects from the pilgrimages to Mecca by which he and they set great store.

This, not fear of English arms, induced the Mogul to deal magnanimously with the English, and to reinstate them at Calcutta after the Hugh factory had been destroyed.

Free Trade v Monopolies
But the East India Company had other vicissitudes to pass through besides Dutch and French rivalry and quarrels with the native powers. Their monopoly was a grievance. Enterprising English merchants objected al­together to the principle of the joint-stock company; they wanted to trade for themselves, and to secure for themselves the profits of their own enterprise and energy. They wanted Free Trade for the individual, and they struggled hard to break down the company's monopoly.

The Com­monwealth government inclined to favour the view of the "interlopers," as they were called, and to treat their independent trading as legitimate. Cromwell, however, resisted the temptation to allow a rival company to set itself up. The view prevailed not that monopoly was in itself a thing desirable, but that under existing conditions it was a necessity. Only a mono­polist company would be able to exercise the sovereign functions which were required in dealing with native powers and foreign rivals.

East India rivals
The theory found justification in the reign of William III, when a rival company was actually established under Whig auspices, the old company being associated with the Tories. This was in 1698. The Exchequer was in need of money. The company offered nearly three-quarters of a million to have its charter confirmed by parliament. The interlopers were ready to provide two millions if the subscribers were given the exclusive trade for thirteen years.

The second offer was accepted, while the old company was allowed three years' grace to wind up its affairs. Before the three years were up a Tory parliament confirmed the old company's charter. The battle between the companies was so obviously and immedi­ately disastrous to both that in a very short time they were negotiating for a union; and in the last days of 1701 they were incorporated as a single company whose monopoly remained unchallenged for a century.

The Mercantile Theory
The accepted commercial doctrine of the day was what is called the Mercantile Theory. It was the business of the State to direct commerce and industry into the channels which were regarded as best for the national welfare; the theory of free competition was unheard of. The East India Company itself had much ado to preserve its existence, apart from the difficulties already referred to, because, there was a very general belief that the East India trade was bad for the country, although highly profitable to the traders.

The argument was that India did not buy English goods, while England bought Indian goods. Therefore what took place was an exchange of English gold for Indian goods, whereby England was drained of bullion. It was the universally accepted theory that a trade which took money out of the country was bad for the country.

It was left for a later age to demonstrate that in the whole field of trade the balance adjusted itself automatically. The advocates for the company won its ease with the public by the argument that although gold went out of the country to India a large proportion of the goods for which it was exchanged were re­exported and exchanged again for gold at greatly enhanced prices, so that the net outcome of the Indian trade was an actual addition to the amount of gold in the country.

Protectionism
On another side Protectionism and Retaliation both followed in practice upon the mercantile theory. It was good to foster each English industry, good to damage the industry of any neighbour who might become hostile, and good to damage any specific foreign industry which might com­pete with an English one.

The influence of the mercantile community in parliament caused those principles to be applied not only to the countries of Europe but to Scotland, Ireland, and the colonies. Scotland could be dealt with only by tariffs, but Ireland and the colonies were subject to direct legislation from Westminster.

The colonies probably did not suffer very greatly, for die simple reason that, if there had been no legislation at all, there would still only have been a very small market for such of their goods as came in competition with those of England. It was not so with Ireland, where the growing of wool was deliberately suppressed.

Virtually the only industry permitted in that country, apart from agriculture, was the linen manufacture (vigorously encouraged by Strafford), which never became acclimatised in England; and this was not the least of the reasons which kept Ireland in a miserable state of economic depression.

The Darien Scheme
Scotland, on the other hand, though it had gained economically by the commercial and political union under the Commonwealth, had not yet come to regard such commercial advantages as an equivalent for the loss of political independence. With the Restoration she reverted to the position of a foreign state.

Her competing goods were shut out from the English market, and she was excluded from the benefits which English shippers derived from the Navigation Act. Although she was too poor to challenge the great English monopolies successfully on her own account, she attempted to do so, most conspicuously in the disastrous Darien Scheme.

The Darien Company was formed to establish on the Isthmus of Darien a trading centre which was to rival the East India Company. The scheme failed to find financial support outside of Scotland itself, where it was taken up with unreasoning passion. The inevitable failure was attributed to the machinations of the English mercantile community and the political pres­sure brought to bear upon foreign communities by William acting under their influence.

The collapse of the Darien Scheme and the widespread ruin it involved were turned to account, like the Massacre of Glencoe, to intensify anti-English sentiment, though there were level-headed Scots who saw in it rather a strong argument for a Legislative Union with England which should make the two countries commercially equal.