The Accession of Richard II 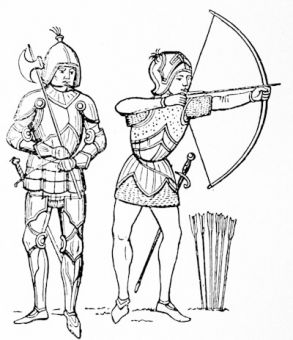 The accession of the young king [Richard II], a boy of eleven, was accompanied by a general reconciliation, which found its expression in the personnel of the Council of Twelve who were placed in control of the government. Both parties were represented. Though neither Lancaster himself nor his younger brothers, Edmund of Langley and Thomas of Woodstock, were members of the Council, Lancaster's vast estates left him individually the most powerful man in the kingdom.

A government thus constituted was hardly fitted to deal effectively with a crisis. The truce with France had come to an end, and matters went ill both in Aquitaine and on the seas. A new parliament was summoned in January which reverted definitely to the attitude of the Good Parliament, turned some of the Lancastrians out of the Council, and claimed definitely that no Act passed in parliament should be repealed without consent of parliament.

The House then proceeded to vote supplies expressly for the war, and required the appointment of special auditors, who should see to it that the money was expended on the war and on nothing else - the first definite instance of the principle of "appropriation of supply."

Still the spirit of conciliation was abroad, and Lancaster, in spite of bis political defeat, was entrusted with the control of naval and military operations, which as usual he mismanaged. The treasury was exhausted; and to raise more money the Commons agreed to a poll-tax, graduated according to wealth, and ranging from a groat up to six pounds. The tax brought in less than half of what had been expected, and the fleet on which it was expended was shattered by a gale. There was another re­construction of the ministry, but no improvement in efficiency.

Once more additional taxation was demanded, and again the reluctant Commons assented to a poll-tax, which this time was not graduated, but was assessed at a shilling a head on the whole adult population. Although an attempt was made to introduce a sort of local graduation, so that in each district the wealthier men should pay more than the poor, the practical effect was only to make the tax more severely felt in the poorer districts, since the average of a shilling a head over the district had to be maintained. This second poll-tax was the occasion, though not the cause, of the conflagration of 1381, known as the Peasants' Revolt or Wat Tyler's Rebellion.