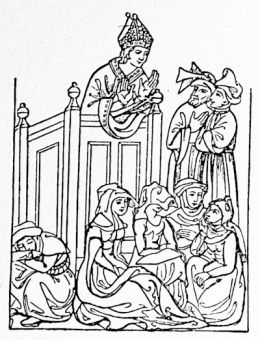 Edward I established the parliament of the three Estates in the closing years of his reign; but that parliament had not learnt to assert itself generally, and offered no resistance when the earls and the greater barons took upon themselves the office of controlling the king's government The Good Parliament at the close of Edward III's reign shows the Commons taking a much more active part in affairs of state. Petitions and protests were freely put forward by the knights of the shire; and the overseers appointed at the beginning of the reign of Richard II. to control the accounts were neither ministers of the king nor members of the baronage, but two leading citizens of London.

The change that had taken place meant that the Commons had been step by step throughout the reign of Edward III acquiring the effective power of the purse; because the enormous expenditure, involved primarily by the wars, made the Crown more and more dependent upon supplies voluntarily granted by the Commons; and at the same time the Commons grew more and more jealous of methods of raising revenue which were not dependent upon their goodwill.

They had not at first made their control effective. They were strong enough to refuse money unless the king would make satisfactory promises; but they were still without effective means of compelling the king to carry out his promises when he had made them. For parliamentary supremacy, the first necessary stage was for parliament to have the power of withholding the supplies necessary to the carrying out of the king's policy; the second step was the application of that power to the control of legislation; and the third, still very remote, was its further application to the control of the Executive.

Accordingly the reign shows the Crown becoming more and more dependent for funds on the goodwill of parliament; while the doctrine is gaining ground that legislation, to be permanent, requires parliamentary sanction; though parliament is only beginning to assume the initiative by expressing in petitions the principles which it wishes to see enacted.

Its attempts to influence the administration are still more embryonic. Only under extreme circumstances and at the very end of the reign does parliament, as distinct from a baronial faction, take upon itself to attack the king's ministers or to demand powers of supervision.

Edward was perfectly conscious that the policy on which he was embarking when he entered upon the French war involved his own dependence upon parliament, and he took care that parliament should expressly commit itself to endorsing his policy; although by so doing he encouraged the development of the idea, which as yet existed only in germ, that parliament was entitled to a voice in the direction of policy. At the same time it was an object with him, as it had been with his grandfather, to minimise that dependence. He endeavoured, therefore, to develop independent sources of revenue.

Something which may be called a commercial policy had first become operative in the time of his grandfather; partly because Edward as a nationalist statesman had began to recognise in commercial expansion one of the roads to national welfare and national strength; partly because he hoped to obtain from it an increase of the royal revenue which should not involve direct reference to the Estates. Like aims caused the third Edward to develop a commercial policy so energetic that he has been called the Father of English commerce.