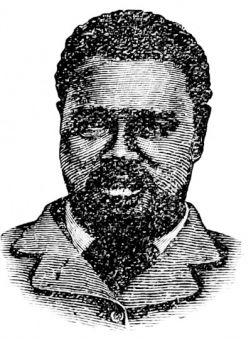 Events in the distant regions of the Empire are apt to escape much public attention at home unless they happen to involve military operations. This was the case with South Africa until the outbreak of the Zulu War during Lord Beaconsfield's [Ed. Disraeli] administration. Nevertheless, events of grave import had taken place at an earlier date.

We have seen that, by the direct action of the British Government during the fifties, two Boer republics had been recognised on the west of the Drakensberg mountains, the Orange Free State between the Orange River and the Vaal, and the South African or Transvaal Republic beyond the Vaal. The ill-defined boundaries on the west of these two states left open a line of expansion northward from Cape Colony which was, for, the time being, ignored.

The Diamond factor
Some years later, however, the discovery of diamond mines changed the situation. The lands were claimed by a Griqua or semi-Hottentot chief, but also by the two Boer states. An arbitration on the question decided in favour of the Griqua, from whom they were purchased by the British Government in 1871.

When it was subsequently proved that the award had been wrong, the Government declared that, as the paramount and responsible power in South Africa, it could not surrender the diamond fields to the Free State, to which it gave not over generous compensation in cash. The westward expansion of the Boer states was blocked, and the way to the interior was held open to the British.

The Orange Free State under President Brand was a model of orderly and progressive government. The same thing could not be said of the community beyond the Vaal, where there was no firm central administration. There were troubles with the neighbouring Bantu tribes, and behind those tribes on the south-east lay the highly organised military state of the Zulus, under their exceedingly vigorous monarch, Cetewayo.

The exchequer of the South African Republic was exhausted, and there appeared to be a very serious danger of a collision with the Zulus, in which there was a painful presumption that the Boers would be wiped out.

The wiping out of the Boers was likely to be followed by a huge general rising of the black races against the white. Sir Theophilus Shepstone, a commissioner sent up from Natal to investigate the position, came to the conclusion that there, was only one way of averting the danger - the annexation of the South African Republic, and the termination by British rule of the anarchy there pre­vailing.

There were by this time considerable numbers of British and German settlers in the Transvaal district who were in favour of the annexa­tion, and Shepstone persuaded himself that only a minority of the white population was opposed to it. Consequently in April 1877 the annexation of the Transvaal was proclaimed.

Isandlwana
Lord Beaconsfield's Colonial Secretary at this time was Lord Carnarvon, the pioneer of the conception of a federation of South Africa on Canadian lines. South Africa, as a matter of fact, was not at this time ripe for the development of that conception, but it was with this aim in view that Sir Bartle Frere, an Indian official of great experience and ability, was at this moment appointed Governor of Cape Colony and High Commissioner for South Africa.

The annexation of the Transvaal was not his doing; it merely fell to him in the course of official routine to confirm Shepstone's action. A much more pressing question was the exceedingly menacing conduct of Cetewayo.

The Zulu state was organised with a single eye to military effectiveness. Between the death of Dingan some thirty years earlier and the accession of Cetewayo in 1873, Zululand had remained Comparatively quiet; but now it had become evident that the Zulu king was contemplating a revival of the military glories of his earlier predecessors.

The protests of the British Government against his revival of certain sanguinary practices were answered with something perilously like defiance. To Frere it appeared imperative that the principles applied in the government of India, where most of his experience had lain, must be applied also in Africa.

He proposed to place a Resident in Zululand who should discharge the functions of the Residents at the courts of the native princes in India, and should impose limits on the barbarism of the Zulu government. This, with other demands, was formulated in an ultimatum delivered to Cetewayo in December 1878.

In plain terms, Frere was convinced that, unless the Zulu military organisation were broken up, there would be a war sooner or later which might very well assume terrific proportions. Cetewayo would certainly yield to nothing short of a convincing display of force. At whatever risk there must be no symptom of a hesitation which could be construed as a sign of conscious weakness.

Rorke's Drift
Carnarvon was now no longer at the Colonial Office, and the home Government, with its eyes fixed upon Afghanistan, could not be induced to realise the gravity of the situation. Cetewayo ignored the ultimatum. Under the general direction of the Commander-in-Chief, Lord Chelmsford, three British columns entered Zululand, the movements beginning in the second week of January 1879, when the date fixed by the ultimatum had passed.

The advance of two of the columns was stopped by the news of a great disaster to the third column under Lord Chelmsford himself. A portion of his force was encamped at Isandlwana, while the Commander-in-Chief advanced with the rest to attack a Zulu military post at some distance.

But the Zulus were not waiting there. The 900 men left in camp at Isandlwana became suddenly aware that they were being enveloped by a force of 20,000 Zulus. In the desperate struggle which ensued the British camp was wiped out, though in some degree the blow was counterbalanced by the magnificent defence of Rorke's Drift at the passage of the Buffalo River, where a handful of men had been left to keep the communications with Natal open.

Zululand annexed
The advance into Zululand was paralysed. It was not till April, three months after Isandlwana, that the arrival of reinforcements enabled Lord Chelmsford again to take the offensive. The issue then could hardly be in doubt, and the Zulu army was completely shattered at the battle of Ulundi in July. Cetewayo became a fugitive; his hiding-place was subsequently betrayed and he himself was deported to Cape Colony.

Lord Wolseley, who had arrived to supersede Lord Chelmsford, was left with the task of providing a system of government for Zululand, which was divided into districts, still under a dozen native chiefs with a single British Resident exercising a general control. The system, however, did not work satisfactorily, and Zululand was actually annexed in 1887.

Consequences ...
The affairs in South Africa and in Afghanistan were very serious blows to the Beaconsfield administration at home. But the destruction of the Zulu power had destroyed also the principal justification for the recent annexation of the Transvaal. While the Zulu menace was present, it would have been vain for the Boers to attempt any active protest. But the Dutch dislike to the British domination was as strong as ever, and when there was nothing more to be feared from the Zulus it bore fruit.