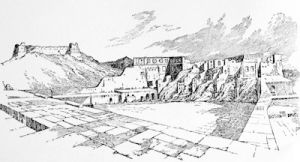 The British Residency, Kabul, after the rising of 1879

One of the last acts of the previous Conservative administration had been the appointment of Lord Mayo to the Indian viceroyalty in succession to Lord Lawrence. Lord Mayo was assassinated after achieving an unexpectedly high reputation, and the Liberals appointed Lord Northbrook in his place.

Both Mayo and Northbrook maintained their predecessors' attitude towards Afghanistan, but a strong school of politicians was growing up in India who were dissatisfied with "masterly inactivity."

In their view the persistent advance of Russia in Central Asia made it of extreme importance that there should be a rectification of the whole north-west frontier which should not only render it impregnable but should make it also an effective basis for military operations in and beyond Afghanistan.

They held also that, however excellent the intentions of the particular ruler in Afghanistan might be, it was necessary to exercise a certain supervision over that country in order to prevent Russia from planting her influence there, and to keep the British government in India supplied with really trustworthy information. These ideas were adopted by the Beaconsfield administration; Lord Northbrook was not prepared to fall in with them; and in 1876 he resigned, to be succeeded by Lord Lytton.

Victoria becomes Empress of India It was at this moment that Disraeli had resolved upon another of his picturesque effects. It was one of Lord Lytton's earliest duties to hold a great Durbar or assembly of native princes in order to proclaim, on the first day of 1877, that the Queen of Great Britain and Ireland had resolved to add to her titles that of Empress of India, Kaisar-i-Hind.

The step was viewed with considerable disapprobation at home, but Disraeli was probably right in believing that it would appeal to the imagination of the Indian peoples with whom pomp and ceremonial magnificence is a visible testimony to power.

Whether the effects were great or small they were of an intangible order; not so was it with the Afghan policy of Lord Lytton. There could be no doubt in the mind of any one at all as to the real advantages which would be derived from the presence of a British Resident at Kabul, on one condition - that his presence should be acceptable to the Amir and to the people of Afghanistan. The difficulty lay precisely in the fact that it was not acceptable. But Lord Lytton had made up his mind that it was necessary whether acceptable or not.

Chamberlain's Mission to Afghanistan
Pressure was brought to bear upon the Amir to receive a British mission, and the Amir at once scented an intention on the part of the British to establish control over him through a Resident. He explained that a mission could not possibly be admitted. Relations became very much strained; but active measures were postponed in view of the then imminent danger of a European war.

The war was averted, but the Berlin Treaty was followed by increased activity on the part of Russian agents in Asia. Lord Lytton learnt that a Russian mission had been received at Kabul. There could be no excuse then for refusing a British mission. He again announced that a British mission would be sent to Kabul with Sir Neville Chamberlain at its head.

Afghanistan Sher Ali protested, declaring that the Russians had not come by his good-will. Nevertheless the mission was despatched, but was turned back on the Afghan boundary. The result was inevitably an ultimatum demanding the acceptance of a permanent mission. The demand was ignored, and Lord Lytton proceeded to invade Afghanistan. Only one of the three invading columns, that commanded by Sir Frederick Roberts, had any hard fighting to do.

Sher Ali recognised the futility of resistance; the Russians, who had no intention whatever of helping him, departed from Kabul, and he himself fled, to die very shortly afterwards, leaving the Kabul government in the hands of his son Yakub Khan, Yakub accepted a treaty. A "scientific frontier," that is, the military control of the passes, was ceded, and a British Resident, Sir Louis Gavagnari, was accepted. In July (1879) he arrived at Kabul with a small escort.

The third column under Sir Donald Stewart, of which the objective had been Kandahar, where it was now stationed, was to remain there till the cold weather. The rest of the British troops were withdrawn.

Kabul Uprising
Then the old story was repeated up to a certain point. There was a rising in Kabul; the Resident and his escort were cut to pieces after a gallant defence. But within four weeks of the massacre Roberts, with a force of six thousand men, was back within fifty miles of the capital. Ten days later he had entered it. Yakub Khan, who, with questionable truth, declared his own entire innocence of the recent outrage, was permitted to resign; and the temporary administration was placed in the hands of Roberts.

This was at the end of October; but by December it had become clear enough that Roberts with his small force could do nothing more than remain on the defensive in his position at Sherpun. Here, however, a prolonged attack was finally and decisively repulsed at the end of the year, and Roberts was master of the Kabul district.

Abdur Rahman named ruler
In the spring (1880) Stewart to a considerable extent cleared the country by his march up from Kandahar to Kabul, in the course of which there was one exceedingly hot but brief engagement at Ahmed Khel. From.this time policy was dictated by the newly inaugurated Gladstone Government; Lytton was recalled, and his place was taken by Lord Ripon. The intention was to revert to the Lawrence policy.

The restoration of Yakub Khan was impossible, as also was the recognition of his brother Ayub at Herat. The Amir chosen was one of the claimants whom Sher Ali had succeeded in expelling, Abdur Rahman. But Kandahar was to be retained by the British under British control with another Afghan governor, a second Sher Ali.

Kandahar Besieged
Between Abdur Rahman at Kabul, Yakub at Herat, and this Sher Ali at Kandahar, the preservation of peace was most improbable. Yakub opened the attack by marching from Herat towards Kandahar, raising the tribes as he went; Sher Ali's troops mutinied, and a part of the small British force which had been left at Kandahar, marching out to face Yakub, met with a disaster at Maiwand.

Kandahar was rapidly placed in a state of defence, and Stewart and Roberts at Kabul resolved that the latter should at once march to the relief of Kandahar with a force of ten thousand men. Speed was essential. For three weeks Roberts vanished into the unknown. At the end of three weeks he had successffully accomplished his march of three hundred miles, entered Kandahar and on September 1st entirely shattered Ayub's forces.

Again there was a modification of the political programme. The Government was convinced that the sound principle for dealing with Afghanistan was that which had been ultimately adopted towards Dost Mohammed. The Amir was to be left to establish his own authority. He was not to have a Resident forced upon him, but he was to be pledged to have no diplomatic relations with any foreign Power, while the British were pledged to defend him against aggressive action.

The retention of the ceded frontier outposts was a necessity, but it was decided that the occupation of Kandahar would involve more risk than benefit, since the way to it from India was secured by the occupation of Quetta at the head of the Bolan Pass on the Baluchistan frontier.

Afghanistan evacuated
The retirement from Kandahar was strongly disapproved by military advocates of the forward policy, but it may be said that the best military opinion was divided on the question. The evacuation of Afghanistan was completed early in 1881, and Abdur Rahman proved himself entirely capable of establishing his own authority. Also he was shrewd enough to distrust Russia more than the British. On the whole, it may be claimed that the policy of evacuation, in spite of the risks involved, was justified by the event.

The newspaper hit the streets in May, at a cost of 1/2d per issue

This monarch was discovered in captivity by his minstrel


He was held prisoner by the Holy Roman Emperor, Henry VI

The minstrel's name was Blondel