The Annexation of Ireland 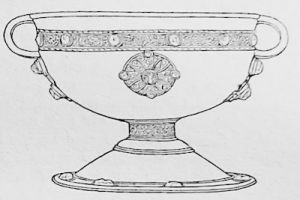 An Irish chalice of the 10th to 11th centuries

Henry II won, as we have seen, from the Scots king a complete submission and an acknowledgement of his suzerainty over the kingdom, of Scotland. This, however, was to be immediately abrogated by Henry's successor. On the other hand, he made a permanent acquisition by the annexation of Ireland, which hitherto had stood outside the region of English affairs, though it had influenced the early history of Scotland.

The Romans came and passed but never set foot on the sister island. The English came and made themselves masters of Britain, save for the highlands of the west, from the Channel to the Forth, the “Scots water." And they also left Ireland alone. The Irish Celts continued their Celtic development untouched by the Latin or the Teuton.

They sent out those tribes which occupied Argyle, and ultimately gave their name to the Scottish nation. They sent out the missionaries who taught Christianity to the wild peoples of the North, and seemed likely enough at one stage to capture all England for their Church. But Celtic tribalism never adapted itself to the evolution of an advanced political State.

The subordination of the parts for the sake of the whole was alien to the Celtic temperament; and the progress which followed upon the stirrings of religious enthusiasm ended when the motive impulse died down. Ireland continued to be peopled by clansmen personally devoted to their petty chiefs, but under no common government.

Powerful chiefs exercised some dominion over numerous minor chiefs, and some sort of nominal supremacy over the whole island on the part of the chief of the O'Neills seems commonly to have been recognised by these lesser kings. But Ireland was no more immune from the attacks of the Northmen than the rest of Western Europe.

Danes so-called, and probably many more Norwegians than Danes, harried her coasts and planted settlements from Dublin to Waterford - settlements which were made the occasional base for attacks upon England. But these Danes made no great effort to effect a conquest; the Danish host never flung itself in force upon Ireland as it did upon England and France. According to tradition.

A Norse conquest was attempted early in the eleventh century, when the invaders were overwhelmed at the great, battle of Clontarf by the Irish hero, Brian Boroimhe, in 1014. This, however, was precisely the-time when Denmark was conquering England, and no aggressive national movement was taking place from Norway.

The Danes or Norsemen who were overthrown by Brian Boroimhe were no great host of invaders from oversea, but probably the folk from the Danish settlements on the coast, though reinforced no doubt by bands of miscellaneous sea-rovers.

However, the battle of Clontarf put an end finally to active aggression on the part of Danes or Norsemen. Ireland was not included in Knut's conception of a northern empire. Seventy years later it appears that William the Conqueror contemplated the annexation of Ireland, of which doubtless also William Rufus also dreamed.

The English Chronicler says that the Conqueror, had he lived two years longer, "would have subjugated Ireland by his wisdom without war." But his plans remain unrevealed and never materialised in action. Whatever Rufus may have intended, his ambitions were cut short by Walter Tyrell's arrow in the New Forest.

Nevertheless, if Brian Boroimhe delivered Ireland from the Scandinavian conqueror, he did not succeed in organising an Irish state. Ireland regained unconsolidated, a congeries of clans engaged on interminable feuds, and of petty kings engaged on interminable rivalries; politically and ecclesiastically as well as geographically outside the influences which were shaking western Christendom; un-Teutonised, un-Latinised, and, from the papal point of view, heretical and hardly better than pagan.

Towards this region Henry Plantagenet turned an occasional glance, as one which it might some day be worth while to conquer if he should find time. Very early in his reign he obtained from Pope Adrian IV, the one Englishman who has ever occupied the papal throne, an authorisation to bring Ireland under his dominion and into ecclesiastical obedience to Rome.

Dermot of Leinster
Other matters were of more immediate importance to the king; but an opportunity presented itself for establishing his authority in Ireland without undertaking a war to that end. Dermot, King of Leinster, was desperately at feud with a neighbour. Deposed from his kingdom, he appealed for aid to the mighty monarch on the other side of St. George's Channel.

Henry would not take up the quarrel himself, but he allowed a group of Norman adventurers to make what they could out of the situa­tion, always on condition of their remaining his own liege subjects and doing homage to him for any new territories they might acquire.

Richard de Clare
The chief of the adventurers was Richard de Clare, Earl of Pembroke, called Strongbow, a baron whose acres did not suffice to make him wealthy or powerful at home in spite of remarkable abilities. With him were associated sundry Fitzgeralds, De Burghs, Fitzurses and others.

They went over to the aid of Dermot with forces which were not indeed large, but were incomparably better equipped than the half-armed levies of the Irish clans, whom they routed with ease. Dermot was reinstated in his kingdom; Strongbow married his daughter, and was endowed with wide estates and the reversion of Leinster.

The rest of the Normans had their share. But Henry of England had no intention of permitting his own barons to set up independent principalities in the neighbourhood of his own kingdom. He was minded to make his own profit out of their adventure; moreover, the murder of Becket made it particularly convenient for him at that moment to place himself out of reach of rapid communication with Rome.

Henry invades Ireland
So in 1171 he proceeded to Ireland with a considerable force. Whatever ambitious projects Strongbow may have entertained, he had no thought of defying the king of England, who came, moreover, armed with the papal authority which conferred upon him the dignity of Lord of Ireland. Strongbow was well enough content to retain the ample estates of Leinster as Henry's vassal and to surrender the royal title.

There was no united Ireland to bid defiance to the invader; and most of the Irish chiefs had no particular objection to acknowledging the overlordship of the king of England, such acknowledgments being in then experience easily made and easily set aside.

All that Henry wanted was a general submission on their part and a secure foothold for himself in case he should afterwards find it convenient to turn it to account. There was no such prospect of immediate profit as would tempt him to expend time, labour, and money on the organisation of the newly acquired kingdom. Policy however, demanded insistence on the ecclesiastical side of his old bargain with Adrian IV in order to conciliate the present Pope III.

The Churchmen in Ireland saw better hope for the future in the prospect of a government organised on the English model than in the prevalent lawlessness. They may perhaps be forgiven if they acted on expectations which were unfulfilled. Their unorthodoxy was not deeply rooted; they accepted the Roman supremacy and ranked themselves on the side of the annexation.

It was rather as though William had merely established a few of his followers with a couple of earldoms and several minor baronies carved out of Wessex, and had then left the country to take care of itself under the nominal control of one justiciar.

Practically this was what Henry did in Ireland. He placed Hugh de Lacey in Dublin as justiciar, and gave him the great earldom of Meath to counterbalance Strongbpw's earldom, of Leinster. A few Normans held scattered territories, while the bulk of the Irish chiefs retained their land as feudatories of the English king.

The English Pale
The English law ran only in the regions from Waterford to Dublin known as the English Pale. Henry, in fact, was quite as anxious to ensure that the Norman barons in Ireland should not become too powerful as to establish over the whole country a control which would have been costly and unremunerative.

It was indeed his intention, at the time of the conquest of Ireland, to part his great dominion among his four sons; and probably when he annexed Ireland he had the idea of making it the portion for the youngest of them, John, who had come into the world ten years after his elder brothers and could otherwise only be provided for by slices out of their territory.

But the fact remains that his organisation of a government for Ireland never went beyond the initial stages; and when twelve years later John did actually visit Ireland, his behaviour went very near to driving the native chiefs into a general insurrection.

In short, the official government exercised only a very inefficient control within the Pale and none at all outside it; while the Norman barons made fresh acquisitions of territory for themselves and, like the Danes before them, adapted themselves to the native manners and customs; and the Fitzurses, by translating their name into its Celtic equivalent McMahon, exemplified the general truth that they had become in spirit much more Irish than Norman.

<< The Reign of Henry II - Annexation of Ireland - Richard the Lionheart >>


He suffered bouts of mental illness throughout his reign