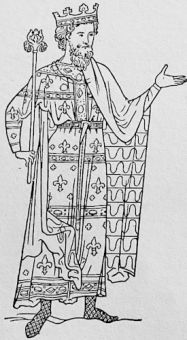 An English monarch about 1190

Lionheart
Richard I is one of the magnificently picturesque figures of our history, the incarnation of all that most appeals to the imagination in feudalism. He is the fiery soldier dominated by the great ideal of winning back the Holy Sepulchre from the Paynim; he is the knight of unmatched prowess before whose terrific onset the Saracens are scattered like chaff; he is the hero so fearless and so mighty that it was fabled concerning him that he slew a lion with his hands; he is the minstrel king, rescued from durance vile by the faithful persistence of his loyal follower, Blondell; he is the genial monarch who exchanged buffets with Robin Hood and Friar Tuck in merry Sherwood; he is the generous prince, too chivalrous to punish the traitorous brother whom he freely forgave; who dying, freely pardoned the man who had dealt him his death-blow.

Fact and Fiction
Fact and fable are largely mingled in the picture. But as far as concerns the history of England Richard's personality belongs chiefly to romance. Out of his whole reign of ten years he spent barely six months, all told in England. His crusading exploits form no part of English history; the political aims on which he was engaged in his latter years belong to his position as a continental, potentate, not as king of England.

His reign had, indeed, a constitutional importance not very easily grasped and very easily forgotten in the glamour of romance which attaches to him; but this was owing, not to Richard, but to the ministers to whom he entrusted his kingdom during his absence.

Raising money
Although there was practically no established law of succession, Richard's title to the crown was unchallenged when Henry II died. From August to December, 1189, he was in England, engaged in preparations for the crusade. His great need was money, which he raised with unparalleled recklessness by selling everything he had the power to sell for which he could get a price.

For a price he set William the Lion of Scotland free from the obligations of the treaty of Falaise, and cancelled all English claims which rested upon that transaction. He sold a share in the chief justiciarship to the Bishop of Durham; he sold sheriffdoms right and left; he sold charters to the towns; he sold offices and honours; he sold permission to resign offices and honours. Then he departed, and England did not see his face again till the spring of 1194.

William Longchamp
He left behind him as chancellor and chief justiciar - the Bishop of Durham was soon superseded - a low-born Norman, William Longchamp who had the one supreme merit of being loyal to his master. His brother John and his illegitimate brother Geoffrey, Archbishop of York, were under oath to remain outside the kingdom for two years.

Longchamp who was generally detested as an upstart, and displayed all an upstart's vices, started on a policy of repressing the nobles by re-occupying the royal castles which had been left in their hands in consideration of substantial payments. But Prince John had been allowed to return to the country, and now sought to pose as the champion of liberty against the justiciar's oppression.

Richard, whose progress to Palestine was delayed in Sicily til the spring of 1191, received warnings which led to the appointment if the trustworthy and capable Walter of Coutances as justiciar in the room of Longchamp.

John plotted to obtain supreme power for himself, with the connivance of Philip of France, who had returned from Palestine a few weeks after Richard's arrival there. In the autumn of 1192 Richard himself started on his return, journey; but he was shipwrecked on the Adriatic coast, captured by his personal foe, Leopold of Austria, and handed over to the clutches of the German Emperor Henry, who held him in captivity.

Conspiracies
An enormous ransom was demanded, and the conspirators, Philip and John, spent the year 1193 in intrigues to prevent Richard's liberation. But Walter of Coutances and his successor in the justiciarship, Hubert Walter, Archbishop of Canterbury, aided by the old queen-mother Eleanor, succeeded in raising the huge ransom; and the conspirators were checkmated by Richard's own arrival in England in March 1194. Rebellion collapsed and the rebels met with undeservedly generous treatment.

Hubert Walter
Richard's exploits had secured him a popularity in England, which was evidenced by the readiness with which the nation had submitted to fearfully heavy taxation in order to set him free; and which was not destroyed even by the new taxation imposed for carrying out Richard's vengeful designs against his arch-enemy, Philip of France. Within two months Richard had again departed froth England, never to return, leaving the government in the hands of Hubert Walter, who ruled the country for four years.

Richard's wars and diplomatic intrigues concern England mainly because of the heavy demands for taxation and for military service which they entailed. The latter brought about what may be called a constitutional alliance of the greater barons and the higher clergy, which foreshadowed the events of the coming century.

Headed by Bishop Hugh of Lincoln, they declared that their feudal obligation did not extend to service beyond the seas. And this Constitutional Opposition carried its point, Hubert whereupon resigned his position, and Geoffrey FitzPeter, Earl of Essex, took his place.

Local government
But the fundamental importance of Walter's term of office lies in his development of the system of representation and election for the purposes of local government, which afterwards provided the machinery for a representative parliament.

The archbishop, it may be taken for granted, was not looking forward to any such development; probably he was concerned only with administrative convenience. But the changes he made also had the political effect of adding greatly to the importance of the class which grew into the gentry of the country, the "knights of the shire," who were for the most partenants-in-chief holding from the Crown.

Men of greater estate than the small freeholders, there was no class in the community whose interests were more bound up with the maintenance of peace and the enforcement of law. Hitherto the local "juries" had been bodies selected by the sheriff; it was their function to lay sworn information before the Crown officials in connection with assessments for taxation and for fiscal purposes, and to present cases for trial at the grand assizes.

Elections to the Great Council
Walter substituted for this arrangement the election in the shire court of four officers called Coroners, who decided which cases should be reserved to be presented for trial by the judges; and the selection of the juries instead of being left to the sheriffs, was placed in the hands of four knights of the shire elected for that purpose in the shire courts.

Thus the way was prepared for sending elected knights of the shire to attend the Great Council, the name now clearly appropriated to the National Assembly, at which all tenants-in-chief were entitled to be present.

Incidentally also knights of the shire were appointed "custodians of the peace," which meant primarily that they controlled the "Hue and Cry" which may be described as the local machinery for police purposes, out of which again at a later stage developed the functions of justices of the peace.

Richard's Death
In 1199 Richard received his death wound while besieging the fortress of a recalcitrant vassal, the Viscount of Limoges, and was succeeded by his brother John.

<< The Annexation of Ireland - Richard the Lionheart - King John >>