The Arts in the Middle Ages 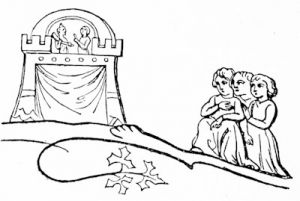 The Middle Ages are, not quite without warrant, condemned as an era of intellectual stagnation, a period with no art, no literature, no science, and no philosophy. The best literature of the ancient world was lost, its temples and its statues were buried in ruins; its pagan philosophies had been ruled out by ecclesiastical dogmas which imposed rigid limitations upon all inquiring spirits, and stamped as impious all investigation of phenomena for which the Church found a supernatural origin, or such as threatened to throw doubt upon her authoritative pronouncements. Knowledge and discovery are necessarily bounded by the limitations of the human intellect; but to these were added the artificial limitations of theological dogmas.

Intellectual, stagnation, however, is after all an incorrect description of the result. Stagnation is the antithesis of activity, and there was no absence of intellectual activity. Sterility rather than stagnation is the correct word, because the activities were directed into unproductive channels. Nevertheless, revolt had begun long before the fifteenth century; and the British Isles can claim to have been the birthplace of men who gave a great stimulus to intellectual emancipation.

Scholars
Such were Duns Scotus in the latter half of the thirteenth century, as to whom it is uncertain whether his birthplace was in Ireland or in Scotland or the north of England; William Occam, an Englishman who was possibly a pupil of Duns Scotus; and John Wiclif, the pioneer of the Reformation. Even more remarkable than any of these was Roger Bacon, the Franciscan friar, the pupil and friend of the great Bishop Grossetete, the greatest among the pioneers of scientific inquiry, who indeed deserves to be called the father of modern science; the prophet of, the great doctrine that, religious truth cannot suffer from the increase of scientific knowledge. But in the Middle Ages no man could be more than a pioneer. emancipation did not arrive until the sixteenth century. Until then, the too independent thinker was assured of condemnation as a heretic, and the scientific experimentalist of condemnation as a necromancer.

Art, too, was almost restricted to the service of religion, and in that service one branch of it flourished. Architecture found scope in the building of churches and cathedrals; upon them piety lavished wealth, labour, and imagination. The monk, too, in his cloister could glorify God by producing masterpieces of decorative penmanship and wonders of illumination. The art of the painter revived in Italy, but it was still confined to the service of the Church and to subjects which tended to edification. Beyond Italy it hardly spread, and in England was practically unknown.

Literature
A people may do without art, but literature of some kind it must have, if only in the shape of folk-tales, folk-songs, and war-songs. But a national literature implies a national language, and that which is preserved by oral tradition alone can only be exceedingly limited.

An English literature had not come into existence before the Norman Conquest, except in the form of the songs of the countryside and the ballads, of which only fragments survived in writing; such as the song of the primitive hero Beowulf, the poem of the monastic servitor Caedmon who sang of the beginning of things, the battle lays of Brunanburh and Maldon preserved in the Anglo-Saxon Chronicle. The men who wrote, wrote in Latin almost exclusively. The Anglo-Saxon Chronicle is the only prose monument of pre-Conquest English, and that is a mere compilation.

After the Conquest there was not for a very long time a national language; that is to say, the tongue of the ruling classes was Norman-French, and English was the language only of the common folk. The learned wrote neither English nor Norman-French, but Latin. Geoffrey of Monmouth and Walter Map collected and embroidered, or invented, legends concerning King Arthur and others, lively romances to which they were pleased to give the name of history, but their Latin tales did not constitute English literature.

Brut
Something which deserves to be called the beginning of English literature appeared when the monk Layamon reproduced in an English poem, Brut, certain of the same legends. Brut was the mythical Trojan hero who gave his name to the islands of Britain. Layamon's poem was written in the reign of King John.

Then for another century and a half the only literature which could be called popular consisted of French romances, prototypes of those which some centuries later perturbed the brain of Don Quixote. England, indeed, produced a real literary figure in the person of one of the best of medieval historians, Matthew Paris; but he, like other men of learning, wrote not in the vernacular but in Latin.