English Literature in the Middle Ages 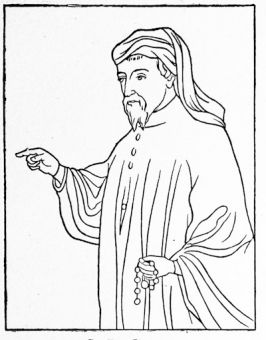 Geoffrey Chaucer, from a contemporary MS. in the British Museum

When the fourteenth century arrived, England was ceasing to be bilingual. If Norman-French was the language of the court, English modified by Norman-French had nevertheless become the common language of the gentry and of the common people. Moreover, the intellectual revival of Italy had just blossomed into sudden glory with Dante, and Dante was succeeded by Petrarch and Boccaccio.

A wave of culture flowed over Europe, and the last half of the fourteenth century saw the creation of a true English Literature by William Langland, John Wiclif, and Geoffrey Chaucer in England, and Bishop Barbour in Scotland — for English is the only name which can properly be applied to the literary language of Scotland as well as of England.

Wiclif's rendering of the New Testament was the foundation of all subsequent English versions of the Scriptures. In William Langland the people of England first found a spokesman, though in the Vision of Piers Plowman his moral scourge spared the peasant no more than the upper ranks of society.

Bishop Barbour was no great poet, yet there is often a fine spirit in the verse wherein he recorded the story of the liberation of Scotland, and the high deeds of his hero the Bruce. But in the literary hierarchy, none is on the same plane with Geoffrey Chaucer, the first master "maker" in the English tongue, who for nearly two hundred years remained without a peer.

Chaucer
Langland, Wiclif, and Barbour all wrote in dialect; Chaucer set the standard of English as a literary language. For generations to come he was the master, and all men who attempted to write poetry were his disciples, however far behind him they might lag. But Chaucer is not merely a craftsman in words, a magician in language; not merely a consummate story-teller; not merely a poet "as fresh as is the month of May," like his own "squyer," clean and sweet, overflowing with joyous vitality, with broad human sympathy, tender and humorous.

Chaucer has painted for us the men and women of his day, the typical gathering which assembled for the Canterbury Pilgrimage, in such wise that they are as living and real as if we had met them, touched them, seen them with our own eyes, heard them talk with our own ears. They are alive now every one of them; somewhat differently clothed of course, modified by some-what different conventions and. by differences in the material circumstances of life.

The eternal human types belong to the twentieth century no less than to the fourteenth. But when the types are presented to us in medieval array, as they lived and moved five hundred years ago, the Middle Ages become as living and real as the twentieth century. Those familiar faces and figures make their surroundings real and actual. We are no longer guessing what sort of person a knight might have been or was likely to be; what manner of a man was a parish priest, a rural squire, a merchant-what a prioress was like or a bourgeoise dame of independent means. We know them all, and knowing them we see also that, after all, it is merely the superficial accidents of life that have changed, not its fundamental conditions.

Sir John Mandeviile
There is another author of the fourteenth century who should not be passed by, the ingenious traveller, Sir John Mandeviile, who indeed really led the way in the writing of English prose. For although he originally wrote the story of his travels, of what he had seen, and of what other travellers told him of what they had seen, in Latin, yet he employed the leisure of his later years in translating his work first into French and then into English.

The work is not without its value, as a record of Sir John's personal experiences, but still more so as a demonstration of the unbounded credulity of the age. Marvels which would have awakened the genial scepticism of Herodotus were cheerfully accepted without question by the English traveller.

The Kingis Quair
English literature burst into full blossom with Chaucer, but after Chaucer there came in England for a century and a half none but the most pedestrian of poets. Worthier successors than Lydgate and Gower were born in the northern kingdom, and chief among them the royal poet James I. His claim to the authorship of the Kingis Quair has been challenged, but is not to be surrendered without more conclusive proofs than have yet been produced.

King James learnt in the school of Chaucer; it is enough to say that he was a pupil of whom Chaucer himself would have been proud. The name of Robert Henryson also stands high above that of any contemporary English poet.

But although poetry languished, and although the Morte Arthur of Sir Thomas Mallory is the one great English prose work of the fifteenth century, the impulse to literary expression was at work. Men began to say in English what a century before they would assuredly have written in Latin if at all. The dispersion of Greek scholarship with the fall of Constantinople in 1453 had something of the effect of an intellectual revelation.

The advent of printing
And yet, after all, the enormous impulse to the literary production of the centuries which followed was hardly so much the intellectual as the mechanical one. About the year 1440, Guthenberg in Germany invented the printing-press with movable types, which made possible the multiplica­tion of books, and by its development created a supply of which was begotten an ever-increasing demand.

Books were brought within the reach of the many instead of being procurable only by the very few. The last quarter of the fifteenth century saw the introduction of the great invention into England, when, under the patronage of Edward IV, William Caxton set up his printing-press in Westminster Abbey.