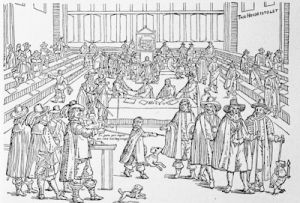 Cromwell ejecting the Rump, 1653, from a contemporary Dutch print

[The Battle of] Worcester had made the Commonwealth finally secure; the government by the Rump [Parliament] and the Council-of State, however well it had done its work, was an emergency government.

The Rump saw no reason for changing the existing state of things; they themselves were in control of the State, and formed an oligarchy which treated all appointments as a preserve for their own kinsmen and friends. They, not the Council of State, were actually the supreme authority, the fountainhead of law, the controllers of taxation, to whom the Executive authority of the Council of State was responsible. It was their very natural desire to perpetuate this arrangement.

A representative parliament was out of the question. Such a parliament would have in it a large Cavalier element, and government by it would be impossible. Their own idea of the best thing for the country was to avoid the appearance of establishing themselves as a permanent oligarchy by summoning a new parliament; but the sitting members, in their plan, were not to vacate their seats at all, and were to have the power of excluding from the new body such of the members returned as were not to their liking.

This solution was not equally satisfactory to any one else. The Rump had forfeited the confidence both of the Army and of the general public; Cromwell himself was ill-pleased at the unfairness with which many Royalists were being treated. Members were more than suspected of bribery and corruption.

There was no guarantee that if the oligarchy were perpetuated it would not develop into a self-seeking tyranny as intolerant as that of the Long Parliament before Pride's Purge. On the other hand, no clear plan had been formulated for the constitution of a satisfactory sovereign authority, and at the beginning of 1653 the Rump was pushing its own plan forward.

Cromwell then urged that the scheme should be suspended, and that the first necessity was the formation of a committee of members of parliament and army officers to discuss the provision of proper securities against an arbitrary tyranny; while the soldiers were demanding an immediate dissolution and the election of a Free Parliament, regardless of the fact that a Free Parliament in the existing circumstances would inevitably degenerate into a chaos of factions. The Rump, on the other hand, saw in its own scheme the only way of averting such a chaos or a military ascendency.

On the day after he had extracted from several of the parliamentary leaders a promise not to proceed immediately with their bill, Cromwell learnt that the House had assembled and was pushing the bill through. Once more he found forced upon him the necessity for intervening arbitrarily on his own responsibility.

End of the Rump Parliament
If the parliament was the only body in England which had any semblance of legal authority, it was now using that authority to override every principle for which the Civil War had been fought. Cromwell, with a small band of soldiers behind him, burst into the Chamber, stormed at the members, summoned his followers to "Remove that bauble," the mace, and ejected the Rump.

The Barebones Parliament
The Rump was down; but what was to take its place? The General and his council of officers resorted to the desperate expedient of summonsing a nominated assembly. The Independent congregations were instructed to send in a list of "fit and godly" persons, from whom Cromwell and the officers selected one hundred and forty, who constituted the assembly known to history as the Barebones Parliament, so called because one of its members bore the attractive name of Praise-God Barebone.

It had no pretence of being a representative assembly; it was not much more than a fortuitous gathering of persons whose morals were unimpeachable and their intentions excellent while they were wholly devoid of political knowledge and experience. The idea undoubtedly was that the assembly of nominees was to inaugurate the rule of the saints; but the saints lacking the wisdom of the serpent, were not at all likely to prove as harmless as doves.

The more intelligent among them very soon realised the fact for themselves, rose up early one morning, met together, and passed sentence of dissolution on their own body. The experiment had failed ignominiously. Once more it was laid upon Cromwell and the officers of the Army to devise a scheme under which the government of the country could be carried on.

<< The Anglo-Dutch War - Barebones Parliament - The Protectorate of Oliver Cromwell >>