The Protectorate of Oliver Cromwell 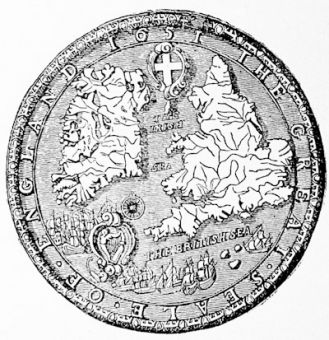 The Great Seal of the Commonwealth, 1651

The deliberations of the officers of the Army issued in the publication of the decree called the Instrument of Government. Until the overthrow of Charles I the English constitution had been developed by regular growth. There had been no revolutions in the system, however violently dynastic changes had been effected.

The Civil War had effected a revolution and necessitated the invention of a constitution which had not grown out of the past, of which the most that could possibly be said would.be that a simulacrum or semblance of some features of the past was re­produced in it.

The first experiment had produced the Rump, which was a travesty of a parliament, coupled with the Council of the State, which was a quite practical equivalent for the various forms which the Executive Council of the Crown had formerly taken. If the Rump had been a travesty, the Assembly of Nominees was a burlesque.

Now in the Instrument of Government the Army officers made their third experiment the rough and ready framework for a constitution which affords, an instructive contrast to the mathematical accuracy and the logical perfection of the various impossible constitutions with which France was saddled when she started in the search for an ideal government in 1789.

Practical sense singled out one man as the only possible head, the man whose personality was irresistibly dominant, Oliver Cromwell. Cromwell then was to be Lord Protector, a title revived from times when a minor or an imbecile had occupied the throne and a practically regal authority had to be vested in a subject.

The Executive power was vested in the Protector and the Council of State, which was a permanent body with power to fill up its own numbers. But neither Protector nor Council had the power of legislation or taxation, which, by the decree, were appropriated to a representative parliament entirely elective and forming a single Chamber.

When the Chamber was not sitting the Executive could issue decrees, but those decrees had effect only until the parliament decided to abrogate or to confirm them. Cavaliers were not eligible to the House. The entire control of the Army lay with the Executive.

The parliament was to meet not less than once in three years, and was in no case to be dissolved until it had been sitting for five months. The Protectorate of Oliver Cromwell began in December 1653. Its sanction was nothing but the will of the Army and the sulky acquiescence of a nation which had no alternative.

For something less than five years Cromwell's will was supreme. He had been primarily a champion of the liberties of parliament; after the defeat of Charles I, he had been urgent in his endeavours to restrain the rising spirit of antagonism to the Crown as such, earnest in his pursuit of a compromise. Now the champion of liberty could find no way of ruling in England except by despotically imposing his own will on her.

He did not want to dispense with parliaments; throughout his rule he summoned them according to law; but when they met, parliament and Protector habitually found themselves arriving at a deadlock, from which the only escape, just as in the case of parliament and Charles I, lay in the decisive assertion of the supremacy of one or the other. But, unlike Charles, Cromwell never had any difficulty in proving the decisiveness of his own supremacy. He had what Charles had not the obvious superiority in physical force. There was no gainsaying the fact, and no failure in the Army's loyalty to its chief, whose ideals it shared.