Beginning of the English Civil War 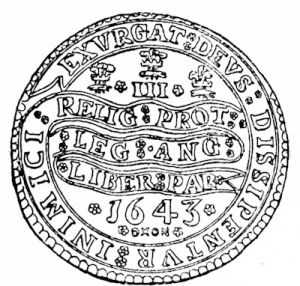 Reverse of three-pound piece of Charles I, struck at Oxford, 1643

One immense advantage the parliament possessed [at the start of the civil war]; it had the fleet on its side, and held control of almost every port in the country. It controlled also the machinery for taxation, whereas the king was obliged to rely for financial support chiefly on voluntary contributions. The struggle at the outset was an English struggle; Scotland stood aside, and Ireland was too deeply plunged in its own embroilments to take a hand in the conflict on the east of St. George's Channel.

In England, roughly speaking, the northern and western counties favoured the royalist cause, the midlands were divided, and the eastern counties from the Humber to the Isle of Wight favoured the parliament, while Devon and Cornwall at first hung in the balance. But the towns tended to favour the parliament, and all over the country Puritan gentry were to be found in the Royalist counties, and Royalist gentry-in the Parliamentarian counties.

Precisely as the Reformation had taken hold readily in the eastern portion of England, while the north and the west clung to their traditional beliefs, Puritanism was accepted in the east, while the Conservatism of the north and west kept them, in the main, on the side of the Church and the Crown.

As in the past, so now, London, Kent, and the Eastern Counties, were the districts most zealous in asserting popular rights. And now, as before, the seamen in the ports of the west as well as of the east were on the Puritan and popular side. Only to a very limited extent was the war one of classes. It was no uprising of an oppressed population against the domination of an aristocracy.

There was, indeed, a preponderance of the aristocracy, of the landed gentry on one side, and of the burgess element on the other; but on both sides both were represented, and for two years the chief parliamentary commanders were the Earls of Essex and Manchester. The whole of the great English civil war was further characterised by an honourable absence of the ferocity for which the Thirty Years' War, still raging on the Continent, was distinguished.

Both sides were fighting for principles which it was not inherently impossible to harmonise; on both sides the majority sought only the predominance of its own principles, not the complete destruction of its opponents. And in consequence the havoc wrought and the brutalities committed were extraordinarily small in comparison with those of other wars of equal magnitude. Even the damage wrought in churches and cathedrals by iconoclastic Puritantism was slight in comparison with what had been done under shelter of law, when there was no war at all, in the reigns of Henry VIII and Edward VI.

Roundheads and Cavaliers
The war in its initial stages was a war of military amateurs. There were few living Englishmen in 1642 who had ever seen a pitched battle or witnessed a scientifically conducted campaign under capable commanders.

For its rank and file, one side had to rely mainly on city train-bands or on a very raw militia, while the other drew its recruits largely from the establishments of great landowners. The Royalists, or Cavaliers, were very much better furnished with horse, while the strength of the Parliamentarians, or Roundheads, lay in the stubborn valour of their foot-soldiers.

The distinguishing feature lay in the great preponderance among the Cavaliers of the class corresponding to the public-school-boys of today. "Their troops," said Cromwell, "are gentlemen's sons, younger sons and persons of quality, gentlemen that have honour and courage and resolution in them. You must get men of a spirit that is likely to go on as far as gentlemen will go, or else you will be beaten still."

With all the grit and courage which the Roundhead troops displayed in the first stages of the war, a grit and courage which frequently saved them from disastrous defeat, their training had not given them the audacity which was necessary to the winning of victories. The problem for the Roundhead leaders was to find that inspiration which would make their men fight to win instead of fighting to hold their own.

Shortly after this monarch was buried at Winchester Cathedral, the cathedral tower collapsed - a sign?


This king was killed while hunting