Charles I and the split with Parliament 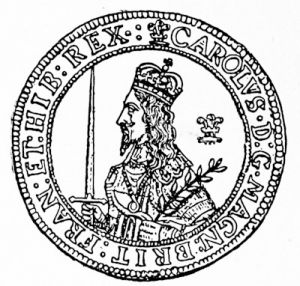 Coin portrait of Charles I, on three-pound piece of 1643

At the moment [that the Grand Remonstrance was being debated in Parliament], the king was on his way back from Scotland. On his arrival in London he found that there had rallied to his support not only something like half the House of Commons but a great force of popular feeling in the city. The violence of the Opposition had so far overreached itself that a very little tact and skill would have sufficed at this period to turn the scale decisively in favour of the Crown. But the tact and the skill were both wanting.

The king invades Parliament
The king adopted a course which stiffened the Opposition and dashed the hopes of his own supporters. Perhaps he thought that the victory was already won; at any rate he proceeded not to conciliate, but to strike.

One of the Lords and five of the leaders of the Opposition in the Commons were found to have held communication with the Scots, which was, undoubtedly, in the technical sense, treasonable. Charles laid an impeachment of the Members before the House of Lords, and on the following day came down to the House of Commons in person, attended by a troop of armed men, to arrest them.

News of his coming had already reached the House, and the five members had been sent off by water to the City where it was known that they would be secure. Charles entered, leaving his followers outside the still open doors, and advanced to the Speaker's chair amid cries of "Privilege" from every hand. Announcing that he had come to take the "traitors," he asked Lenthall, the Speaker, if they were present.

Lenthall, kneeling, replied that he had neither eyes to see nor tongue to speak save as the House should direct him. Himself scanning the benches, and seeing that, in his own words, "The birds had flown," he withdrew, with a warning, that if the House did not send them to him he must take his own course.

All that he had gained by the proceedings over the Grand Remonstrance was lost, at least outside the House. London was united in solid support of the outraged Commons, who for safety held their sittings in the City instead of at Westminster. A week later the king left Whitehall, not to enter it again till the country had passed through the storms of civil war.

The next eight months were spent by both sides in preparations for an armed conflict, diversified by negotiations, futile because neither believed in the sincerity of the other. The moderates gradually left London to join the king; among the number were reckoned three-fourths of the House of Lords and about one-third of the House of Commons.

The Houses, which continued to sit at Westminster, consisted entirely of the representatives of one side, although they were still technically the National Parliament. But virtually all real chance of peace had been ended when the king attempted to arrest the five members. Both sides were raising troops, appointing officers, and collecting money.

The royal standard raised
The king sent his queen to get financial aid from her brother in France, and from Holland, where the young Stadtholder, William of Orange, had married, a year since, the English Princess Mary. Charles's nephews, Rupert and Maurice, the younger sons of the late Elector Palatine, left what was practically a lost cause abroad to take up the king's cause in England. Hull closed its gates to the king's followers; and the last semblance of peace vanished when the king un­furled his standard at Nottingham in August (1642).