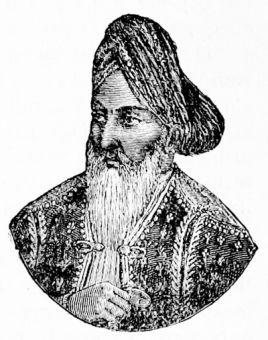 Dost Mohammed, from a native painting

When the first Reformed Parliament was opened at Westminster Lord William Bentinck was still Governor-General in India. Besides the administrative progress recorded in the previous chapter, two other im­portant measures are connected with his term of office. All previous Governors-General had accepted as axiomatic the principle of Cornwallis that only Europeans should be allowed to hold posts of responsibility within the British dominion.

Under Bentinck's rule the theory was discarded while the practice was retained. Race, colour, and religion were no longer recognised officially as barriers to office; but as a matter of fact, neither while appointment continued to be made by selection, nor at a later period when admission to the public services was obtained by competitive examina­tions, did the natives of India obtain anything more than a very small share in the higher business of government, outside the native states. Neverthe­less the official acceptance of the theory was a condition which made the official adoption of the practice possible whenever it should seem com­patible with the public security.

Education
The second measure in fact had the same object in view. This was the establishment and endowment of an educational system which was to imbue the intelligent Eastern mind with the practical wisdom of the West. From the study of English science and English literature the natives would learn to recognise the superiority of Western civilisation, would imbibe Western ideas, and would become fitter for. association with the British in the task of government.

Thomas Babington Macaulay, a brilliant young Whig, who was sent out as legal adviser of the Indian Council in 1834, was the most energetic and persuasive promoter of the scheme; but it scarcely answered the precise purposes with which it was initiated. The natives who profited by the new education belonged almost entirely to a class extremely intelligent but apt to be deficient in the moral qualities which the natives of India require in their rulers. Moreover, while they duly acquired a literary acquaintance, with Western ideas, these did not displace the oriental conceptions which were rooted in their minds from birth, but were only grafted on to them, bearing a fruit very different from that which had been intended.

Lord Auckland and Persia
Bentinck was succeeded after a brief interval by Lord Auckland, and a period unprecedentedly peaceful was followed by one of renewed warfare, though the wars were nearly all beyond the borders of the British dominion. In the north-west corner of what is now British India lay the powerful and independent Sikh state of the Punjab, which had been consolidated and still was ruled by Ranjit Singh. Beyond the mountains was the turbulent Afghan nation, beyond Afghanistan lay Persia, and behind Persia was Russia, creeping always steadily forward, absorbing new territories decade by decade, and, as Palmerston and all Indian statesmen believed, aiming at the ultimate appropriation of India itself. Persia was still accounted a great power, and half the Mohammedan world regarded the Shah of Persia as the lineal head of Islam. The idea then was that Russia intended to make a catspaw of Persia. Persia was to be encouraged to re-absorb Mohammedan Afghanistan, once a province of its own; and was then to call upon the Mussulmans of India to rise against the British ascendency and restore the Moslem supremacy under the aegis of Persia. Upon the chaos that would supervene Russia would descend and set up her own dominion.

Dost Mohammed
British attention to Asiatic problems is always fitful; successive British Governments had omitted to pay due regard to the relations between Russia and Persia; Britain had failed in her treaty obligations to support Persia against Russian aggression; and before 1830 the Persian government had made up its mind that its true interests lay not in a British but in a Russian alliance. In 1837 a Persian army marched upon Herat, the great city of Western Afghanistan. Unhappily Lord Auckland and his advisers misread the situation in Afghanistan, where Dost Mohammed, the ruler of Kabul, was not at all inclined to submit either to Persian or to Russian domination. The true British policy would have been to give the Dost vigorous support in resisting Persian aggression; but his attitude was misunderstood, and it was believed that he meant to play into the hands of Russia. Many years before, Shah Shuja, then reigning over Afghanistan, had been driven from the country into British territory, and the power of Dost Mohammed's family had then been established. The plan to which the Indian government now committed itself was the restoration of Shah Shuja to the throne at Kabul as the ally or puppet of the British.

By September 1838 the stubborn defence of Herat, brilliantly conducted under the guidance of a young British officer, Eldred Pottinger, had proved too much for the Shah; the siege was raised and the Persian army retired. But although the imminent danger was removed, the British Government persisted in its design in defiance of all the most experienced authorities; and in 1839 the British expedition advanced into Afghanistan. Kandahar was captured, then Ghazni. Dost Mohammed retreated, Shah Shuja was enthroned at Kabul, and then it became evident that his position could only be secured by the retention of a great British force and a British Resident at the capital. In the next year, 1840, Dost Mohammed surrendered to the British and was- removed to British territory. Peace apparently reigned; but there was .a rude awakening. The chiefs of the Afghan tribes had at first been pacified by subsidies, and they were the more enraged when the subsidies were withdrawn.

The country was soon in a state of ferment unperceived by the Resident MacNaghten. In November 1841 a great riot broke out in Kabul. Allowed to go unchecked, it developed into a general insurrection. The commander of the great British force at Kabul was hopelessly incompetent, and the Resident was compelled to accept an ignominious treaty under which the country was to be entirely evacuated by the British, who were to leave hostages behind them in the hands of the Afghans. The garrisons at Kandahar, Ghazni, and ]ellalabad repudiated their orders and refused to budge. MacNaghten was murdered, and in midwinter the British - men, women and children, civilians and soldiers, numbering some fifteen thousand souls - started on their defenceless march from Kabul only to be massacred in the mountain passes. Of all that host only one escaped, and reached Jellalabad.

Such was the great disaster which for the moment seemed to threaten the very existence of the British power in India. It took place just at the moment when Peel's great administration began in England. Lord Ellenborough arrived in India to take Auckland's place, and active steps were taken to retrieve the position. The force at Kandahar held its own without difficulty; that at Jellalabad only with extreme difficulty and by distin­guished gallantry; Ghazni surrendered. The first order issued for general evacuation was practically cancelled by a second, which instructed General Pollock with a relieving force which was entering Afghanistan via Jellalabad to effect the evacuation via Kabul. Between April and September Pollock's force and Nott's from Kandahar completely demonstrated to the Afghans the futility of resistance, and the British flag was again hoisted at Kabul.

In the meanwhile the luckless Shah Shuja had been assassinated, and now the British Government did what it ought to have done in the first instance. It restored Dost Mohammed to the throne of Kabul, since he was obviously the chief incomparably the best fitted to hold the reins of powers; and it made with him the firm alliance which he would gladly have accepted at the outset To that alhance he remained admirably faithful, and his lovalty proved of immense service in the troublous years that followed. The situation was saved but British prestige had received a terrible blow in spite of the triumphal processions and grandiloquent proclamations by which Ellenborough endeavoured to persuade himself and the natives of India that the overwhelming power of the British had been magnificently vindicated.

The Queen's Theatre in Haymarket was the venue for Handel's 'Rinaldo'

How many wives did Henry VIII have?