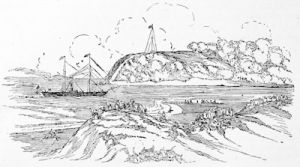 Port Natal in 1852, and the arrival of the first mail steamer, from a drawing made in 1852
Eventful also were these years in the third great field of British colonial enterprise, South Africa. The history of South African problems cannot be fairly grasped without a preliminary sketch of some of the elements which generated them. In the first place it must be understood that the original native inhabitants of the Cape where the Dutch colonists had planted themselves were not negroes but mainly Hottentots, a yellow-skinned race entirely distinct from the negroes, though possibly having a mixture of negro blood. Beyond the borders of the colony, inland and on the east coast from Natal up to the Portuguese territory, were the tribes of Bantus, otherwise called Kaffirs - negro people of a very fine physique, savages certainly, but often with a social and especially a military development which had passed far beyond a rudimentary stage. Com­paratively but only comparatively speaking the southern tribes were peace­ful agriculturists upon whom the ultra-military tribes of the Zulus and the Matabele were pressing from the north. Apart from the subject Hottentots, however, there was in the Cape Colony a considerable black slave popula­tion not drawn from the Kaffirs but imported.

The Great Trek
Now in 1834 the Dutch at the Cape were already irritated by the com­parative anglicising of the institutions of the colony. In 1834 came the Act for the Emancipation of the Slaves, for which the farmers were shortly to find that they were to receive, compensation extremely inadequate from their point of view. Also for the past fifty years there had been periodical collisions with the Kaffirs, who were with difficulty held within their own borders and collisions became more frequent in consequence of the planting of many British settlers in the eastern regions on the Kaffir border. With the exception of the missionaries, every one, British and Dutch alike, regarded the Kaffirs as dangerous savages who could only be kept in restraint by fear; but the humanitarian spirit was at this time extremely active in England, where the missionaries had the ear of the public. Hence just at this time the governor, Sir Benjamin Durban, received positive instructions which, in effect, precluded him from such a demonstration of force as was needed to preserve peace on the Border. The result was that at Christmas time a horde of Kaffirs poured across the Fish River, robbing, raiding, and murdering. Of course there was a war, and of course the Kaffirs were beaten; but even then the instructions from home were on the same lines as before. None of the precautions considered necessary on the spot were to be taken.

The Boers
The Kaffirs were not to be irritated by the overbearing white man. The cup of the Boers, or up-country Dutch farmers was full. The English had disturbed their time-honoured institutions, adopting an air of superiority. They had robbed them of their slaves. Now they would neither allow them to protect themselves against the bloodthirsty Bantu nor provide them with protection. Therefore they would go forth into, the wilderness, shaking off the dust of their feet against the British, as the children of Israel departed from Egypt to find the Land of Promise. So the Great Trek began. Hundreds of Boer families - men, women, and children, with their cattle and their baggage waggons - crossed the Orange River, which was virtually the boundary of the colony, and marched away into the interior to seek independence. It did not strike them that they were British subjects, and would not cease to be British subjects merely because they had removed themselves into barbarian territory.

In those parts the native tribes lived in deadly fear of the Matabele army, which had recently taken possession of the country beyond the Vaal. The enterprising Boers crossed the Vaal, were duly attacked by vast hordes of Matabele, and, fighting with dogged obstinacy within their "laager," routed them with terrific slaughter. The Matabele retired beyond the next great river, the Limpopo.

Dingan's Day
Another set of the emigrants crossed the eastern mountain range called the Drakensberg, and descended into what is now the colony of Natal. They negotiated with Dingan, the king of the mighty warrior tribes of the Zulus, to procure land from him. He received their envoys with fair words and promises, then suddenly fell upon them and slaughtered them. Then he launched his legions against the nearest Boer camp. Only one of the four hundred souls there escaped to give warning' to the rest of the emigrants, who were thus able to beat off the next attack. But it was not till many months had passed and many lives had been lost that an over­whelming defeat was inflicted upon, Dingan upon "Dingan's Day," beside the stream thenceforth known as the Blood River.

Sand River Convention
But the Boers had hardly proclaimed a republic in what, was now in effect conquered territory, when the British government at the Cape decided that the conquered territory belonged to Great Britain. The Boers in sullen resentment again retired across the Drakensberg, and the British established the colony of Natal. The Boers between the Orange River and the Vaal accepted the position of a dependency of the British Crown under the name of the Orange River Sovereignty in 1848; but in 1852 the home government, by no means anxious to shoulder more extensive responsibilities in South Africa, in effect recognised the independence of the Boers beyond the Vaal by the Sand River Convention. To complete this portion of the story, it may be added that after two years more the Orange River Sovereignty was deliberately cut adrift by the home govern­ment against the will both of Cape Colony and of the Boers themselves. The Orange Free State, as it was now called, was left to work out its own salvation, which it did for many years with remarkable success.

In the course of the colonial policy by this time universally prevalent, representative government was thrust upon the Cape Colony in 1853, a boon not greatly desired by the colonists themselves. But the executive, was not yet made responsible to the legislature.
<< British Colonial Government in Australia and New Zealand - British in South Africa - Britain in Afghanistan >> 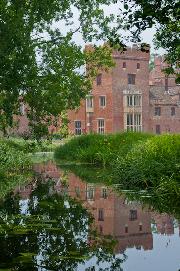 Anne would give birth to Elizabeth I just 3 months later