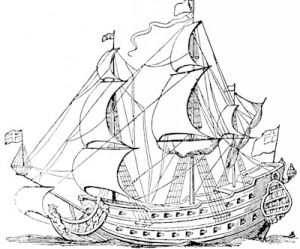 The habitual procedure on the creation of colonies was for a company or an individual to procure from the Crown a charter conveying the pos­session of certain territories upon conditions. Privileges were conceded, but rights were reserved to the Crown.

There was no theory that the colony was a free state; it was a community to which permission was given to settle itself and to go its own way, provided that its specific interests were always recognised as subordinate to those of the mother country.

The powers of self-government varied according to circumstances; that is, the powers of the elected Assembly, as compared with those of the Governor and Council, differed, mainly according to the nature of the body to whom the original charter was granted.

American colonies
On the North beyond the St. Lawrence the French made their province of Canada. The regions between the St Lawrence and New England were appropriated under James I, and named Nova Scotia in order to pro­vide colonising ground for the Scots. But the ground was inadequately occupied, and was claimed and colonised by the French under the name of Acadia.

More than once, during the Anglo-French wars, the theoretical sovereignty changed hands; but it was not till 1713 that the country was finally ceded to Great Britain. We have already observed that the Dutch at one time thrust in a wedge between the northern and the southern colonies of the English, and the continuity of the British seaboard from North to South was only completed with the cession of the Dutch colony at the Treaty of Breda.

Pennsylvania was a colony created in the reign of Charles II at the instance of the Quaker William Penn. This, too, was intended to provide a home for the persecuted members of the Society of Friends, though under conditions which required a general toleration. The Carolinas were an earlier product of the Restoration; both Clarendon and Ashley were in the small group of the original "Proprietors."

The Commonwealth was Imperialist in refusing to differentiate between different portions of the Empire, just as it sought for unification by uniting the parliaments of England, Scotland, and Ireland at Westminster. But with the Restoration the Particularists prevailed. The united parliament was dissolved, and the English parliament became exceedingly English; that is, it sought the interests of England, however detrimental they might be to other portions of the Empire.

The effects were felt by the colonies; for the Navigation Act at the Restoration imposed restrictions upon colonial commerce for the benefit of English merchants. Colonial ships, it is true, counted as English ships; they could participate in the carrying trade. Bat no goods could be imported to the colonies except from an English port, nor might colonial goods be exported except in the first instance to an English, port.

This did not of course interfere with the trade be­tween England herself and her colonies; but it required colonial commerce with all other countries, including Scotland and Ireland, to take England en route. Protectionist principles were presently carried still further, and the colonists were forbidden to export or even to manufacture goods which could compete in the market with English products.

[Ed. Enough background - now things get really interesting! Let's look at the formation of trading companies and their effect on the growth of Empire ...]