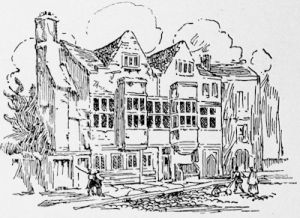 The Old 'Star Chamber', pulled down after the burning of old Houses of Parliament

The prorogued parliament assembled again early in 1629. Buckingham was dead, but Wentworth was already a minister of the Crown, having been appointed to the Presidency of the Council of the North. Montague, censured by the Commons, had been preferred to the Bishopric of Chichester. Laud's activities as the new Bishop of London were in full play. The king had been levying tonnage and poundage as in the past; the goods of sundry merchants had been seized on their refusal to pay the duty, and among them was a member of parliament, John Rolles.

In the existing state of tension it was easy enough for the Commons to believe that they had been tricked and betrayed by the king. The king had a still better right to declare that his own conduct had been unimpeachable, and that the attitude of the Commons was wholly unconstitutional. The elasticity of an unwritten constitution enables the machinery to work with an admirable ease so long as mutual understanding, good temper, and the spirit of accommodation prevail. But now questions had come to the front with regard to which the respective powers of the Crown and the parliament were debatable, each side being determined to push its own reclaim to the utmost.

Instead of mutual understanding there was mutual distrust, and both sides were irritated and out of temper. As a matter of fact, the king was more disposed to accommodation than the exasperated Commons, who adopted a directly provocative course; and both Commons and king went on to set the conventions of the constitution at naught.

The Commons opened by declaring themselves to be in effect the judges of what was or was not orthodox, in religion, and attacked the "innovations" of the clergy who had reverted to customs which were looked upon as papistical. They summoned the innovators to give an account of themselves before the House, and in the meantime turned their attention to tonnage and poundage.

The king had made the offer, reasonable enough in itself, that if the Commons would act according to precedent and vote him the duties for the term of the reign, he would waive the question of right. This was, in fact, the vital question, and it was the issue on which Pym wished to fight; for, unless the Commons could recover that control over tonnage and poundage which had been in abeyance for two hundred years, the king would be able to command a sufficient revenue to carry on the government after a fashion without appealing to parliament for aid. But Pym was overruled by Eliot, and the Commons elected to fight on the question of privilege involved by the seizure of the goods of a member of parliament.

The officers who had seized the goods were summoned to the bar of the House; the king forbade them to obey the summons, since they had only acted in obedience to his orders. He ordered the House to adjourn till March 2nd. In the interval he endeavoured to negotiate with leading members.

The negotiations failed. When the House met, Eliot moved three resolutions; against innovations in religion and the introduction of unorthodox opinion; against all persons who should be concerned in the levying of tonnage and poundage without direct parliamentary sanction; against all persons who should pay tonnage and poundage if it should be so demanded. All such persons were declared to be enemies of the king.

Disorder in the Commons
Before the resolution could be moved the Speaker, Finch, announced that he had orders to adjourn the House again. But two of the members held him forcibly in the chair. The House broke out into wild disorder; one of the members locked the door and put the key in his pocket. When comparative calm had been restored, the Speaker refused to put the resolutions to the House.

The king's troops were approaching to compel the assembly to disperse. While the Speaker was held in the chair, Holies, a member, read the resolutions. They were carried by acclamation. Then the doors were unlocked and the members poured out. Their dispersion was followed by the announcement that the parliament was dissolved. Eleven years passed before another parliament met.

The king took his stand upon his legal rights. The Petition of Right did not bar him from exercising to the full the statutory powers of the arbitrary Courts which could override the Common Law — the Courts of Star Chamber, of High Commission, and of the Councils of the North and of Wales. These Courts were in effect ready to do the Royal bidding.

For the punishment of Eliot and his most prominent supporters it was unnecessary to appeal even to those Courts. They were charged in the King's Bench with riot and sedition. They pleaded privilege of parliament, declaring that the House alone had jurisdiction with regard to matters which took place in parliament. The objection was overruled on the ground that riot and sedition could not be a part of parliamentary proceedings. Eliot refused to admit the jurisdiction, and was thrown into prison, where he was shamefully treated, and died after three years.

The resolutions of the House of Commons could not touch the actual legality of the levying of tonnage and poundage, and the Courts maintained that the Petition of Right covered only those forms of direct taxation which, were specifically enumerated therein. The king then could carry on his government after a fashion, by straining to the utmost every right which the Courts would maintain, but only with a strictly economical expenditure.

To carry on Buckingham's French war was impossible, and terms of peace were soon arrived at, since the war itself was a quite un­justifiable intervention on the part of England in French affairs. Richelieu was victorious over the Huguenots, but he used his victory with unexpected moderation, maintaining the principle of toleration.

English Protestantism was therefore not irritated by the peace. Intervention in Germany was also not possible, but this mattered the less, because in 1630 Gustavus Adolphus of Sweden, the greatest soldier of the day, threw his sword into the Protestant scale. Thenceforth England and Scotland were affected by the Thirty Years' War only because a large number of adventurers, principally Scots, learnt the art of war as mercenaries in the armies of the Swedish king.