Archbishop Laud and the Puritans 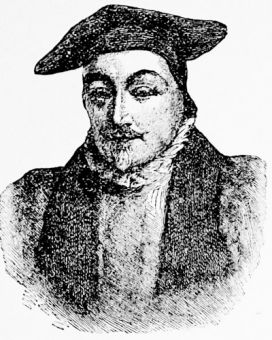 Archbishop Laud, after the portrait by Vandyck

Archbishop Laud
The head and front of the movement in the Church which aroused the bitter hostility of Puritanism was William Laud, who was raised to his first bishopric, that of St. Davids, by James I under pressure from Buckingham and the Prince of Wales. The old king yielded to the young men, but not without a warning grumble that trouble would come of it, not in his day but in theirs.

Just so also he warned them against their folly in encouraging the impeachment of Middlesex, the Treasurer, who was opposed to the war with Spain on which the duke and the prince as well as the Commons had set their hearts. They would find they had more than enough of impeachments without going out of their way to encourage them. The old king's warning came true. In his time Puritanism in acquiesced sombrely while appointments were given to prelates with general sympathies.

The Mayflower Pilgrims
A few of that sect who called themselves Independents demanded a liberty of worship which they could only obtain by migrating to Holland or Denmark, and when a band of them, joined by some associate from England, sailed in the Mayflower and set up in North America that community which became the nucleus of the New England States, they were readily granted a charter, as having provided an outlet for a class of persons who were rather troublesome to the authorities; but a more active interference with the liberty of worship was required at home before a demand for greater freedom gave a strong impulse to emigration.

The pressure came when Charles ascended the throne and the higher ecclesiastical appointments were habitually appropriated to the dis­ciples of that school of which Laud was the leader.

The laxity of discipline prevalent under King James disappeared. The lower clergy took their tone from the fathers of the Church. Breaches of the law were no longer overlooked or condoned. Unfamiliar doctrines were heard from the pulpits. Sermons became ex­positions of the divine authority of kings. The accustomed dogma of predestination began to be displaced in the pulpits by those less rigid views which are called Arninian from their great exponent the Dutch Doctor "Arminius."

The new school, while repudiating the Roman authority, emphasised the claim of the Church in England to be a branch of the Catholic Church, while denying that title to those Churches which had not maintained the continuity of episcopal ordination. They emphasised tradition, the authority of the early fathers, and the rulings of the four first General Councils. To the Puritans all these things were the inventions of priestcraft, innovations, insidious methods by which English Protestantism was to be seduced into the snares of Rome.

Each one of Charles's parliaments lifted up its voice against the new teachers, and still while old Archbishop Abbott remained the Primate the Crown seemed likely to be restrained from using the Church as its own instrument. But in 1628 control over the licensing of publications was transferred from the archbishop to a commission which was practically managed by Laud, who was made Bishop of London.

An attack in the Commons upon Mainwaring and Montague, two of the clergy who had just identified them-selves with the most extreme doctrines of Absolutism as a part of the Divine Order, was followed by the promotion of both. The king had made the Church his ally in the constitutional struggle, while parliament and Puritanism were ranged together in antagonism to the Crown and to the authority of the bishops represented by Laud.