Charles I and the Duke of Buckingham 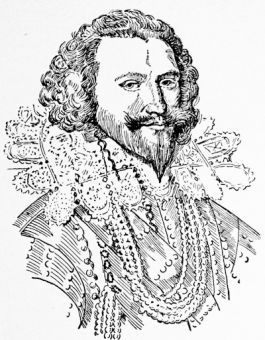 George Villiers, Duke of Buckingham (1592-1628), after a painting by Mierevelt

The situation [after the accession of Charles I] was an awkward one for the new king. He was on the point of marrying his French bride, and his subjects had still to learn how pledges made to them had been traversed by the promises made to the French king. He was in desperate need of money to carry on the war in which Buckingham had involved the country, and the last incident of the war had been an ugly disaster brought about by the grossest mismanagement. An appeal to parliament could not be long deferred, and parliament was absolutely certain, when called, to make itself unpleasant about the duke. The duke might despise it, but it held the purse-strings.

The king did not summon parliament till his marriage was an accomplished fact. He would have to break some promises, whether those made to England or those made to France; but Henrietta Maria was irrevocably his wife, though it was an ill day for England that had made her queen to succeed Buckingham as the king's evil genius. Parliament met, angry and suspicious.

It had separated a twelvemonth before, expecting to be summoned in the winter to provide for a campaign in the direction of which it would have a considerable voice. It had not been summoned and Buckingham wrought irremediable mischief, with no one to criticise or denounce. Criticism and denunciation were forthcoming now.

Parliament stands up to the king
The war was there, and the war must go on, but not under Buckingham's direction; it would be preposterous to vote huge sums of money and see them recklessly squandered with no results. Until the Commons saw their way and knew what was to be done, until Buckingham ceased to dominate the stage, they would only vote just enough money for safety. They would grant two subsidies, that is to say, £140,000. When Buckingham was removed, they would consider further sup­plies, but not till then.

The king was indignant. What right had the Commons to dictate to him the ministers in whom he was to trust? He trusted Buckingham, and would not dismiss him. Instead he dis­solved parliament; at worst he had the two subsidies to go on with, besides tonnage and poundage which had been granted for a year.

The Cadiz Expedition - Singeing the King of Spain's Beard
With the money in hand, Buckingham organised an expedition, not to Holland, but against Spain. At Cadiz, Drake had "singed the king of Spain's beard"; at Cadiz, Raleigh and Essex had again dealt Spain a crushing blow; Cadiz was to be the scene of another glorious triumph. But Buckingham had no Raleighs or Drakes to do his work.

While he went off to Holland to negotiate with German princes, his expedition went to Cadiz with crews collected by pressgangs, and captains who knew nothing of their business. Having gone to Cadiz, they came home again ignominiously, having escaped worse disaster chiefly because they had not attempted to do any fighting. It seemed more evident than ever that nothing could be done until parliament could be cajoled out of supplies.

A second parliament was summoned; Charles hoped to make it amenable by making sheriffs of the most prominent leaders of the opposition to Buckingham, and thereby disqualifying them for election. Their absence only gave a greater prominence and a wider influence for a more pure-souled patriot than any of them, Sir John Eliot.

The new parliament refused to discuss supplies until grievances had been redressed. Charles had no talent for cajolery or conciliation; he replied by threats. The Commons retorted by resolving to impeach Buckingham. The peers were no friends to the duke, and Charles was driven to quash the proceedings by dissolving parliament.

But how was Charles to raise money? Buckingham was now athirst for military glory, and war is an expensive pastime; not the less expensive when the policy of its managers varies from month to month. However, the resources, as it seemed, had not been exhausted. The king had a right to levy tonnage and poundage; at least it had been granted for life to every other king for two hundred years past, although Charles's own first parlia­ment had granted it only for a year and the second parliament had been dissolved without granting anything at all.

Benevolences were illegal; at least in their legal non-compulsory form they were non-productive. Still, compulsory loans might be demanded, and the demand would be difficult to resist. So it proved; but when the demand came before the Chief Justice he pronounced it illegal; whereupon he was removed from office.