The Duke of Buckingham and the Petition of Right 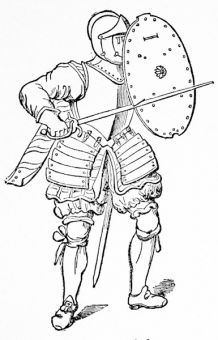 An infantryman of 1625, from Skelton's 'Armour'

Meanwhile [in 1628] Buckingham had been demonstrating afresh his lack of the elements of statesmanship. England had no conceivable justification for going to war at all with anybody, except in defence of the king's brother-in-law, which was excusable for family reasons, or in the championship of Protestantism against aggressive Romanism, the deliverance of Europe from a threatened Hapsburg domination.

There was one Power, Prance, which could not indeed be naturally drawn into a Protestant league as such, but whose interests were entirely opposed to Hapsburg aggression. There was every possible reason for preserving at the very least friendly relations with France. But Buckingham chose to quarrel with France, where Richelieu's government was embarrassed by the semi-religious civil war brought on by the antagonism between the Crown and the Huguenot nobility.

Isle of Rhe
The seaport of La Rochelle had always been a Huguenot stronghold of the first importance. It was now undergoing a siege. Buckingham, neglectful alike of Spain and the Palatinate, resolved to intervene in France with a personally conducted expedition, which was to relieve La Rochelle by capturing the isle of Rhe. The duke was no better fitted to command than to organise a great military expedition. The Isle of Rhe venture was merely a variation on the two previous ventures which had collapsed so ignominiously. Half the expeditionary force died, and the rest came home again defeated and savage.

But the whole business was something more than another military failure be added to Buckingham's account. It had been made possible only by the forced loans for pronouncing which illegal Chief Justice Crewe had been removed from his office. Men of position who refused to pay had been arbitrarily imprisoned by the Council; poor men who refused to pay had been forced to serve in the expedition. Grumblers had been penalised by having troops billeted upon them, and, wherever troops were concerned martial law was allowed to supersede civil law.

Among the men who had been thrown into prison, five knights had demanded a writ of Habeas Corpus, requiring that they should be brought up for trial; but the writ had been refused, the judges declaring that the king had power to refuse a trial.

The circumstances were not favourable for the summoning of a parliament, yet the king dared no longer to struggle on without the substantial supplies which it was impossible to obtain without a parliamentary grant. Charles summoned his third parliament, and it met in angry mood.

The solid ranks of the opposition were led by the dark figure of Thomas Wentworth, by Sir John Eliot, the fiery and single-minded champion of liberty, and by John Pym, clear-headed, unimpassioned, but immovable as Wentworth himself. For the moment the attack was not directed against Buckingham. Personal questions were to be subordinated to a direct and decisive assertion of fundamental principles.

The Petition of Right
According to the now accepted practice, the presentation of grievances preceded the discussion of supply. The Commons formulated their demand in the Petition of Right. There was to be no martial law in time of peace. Soldiers were not to be miscellaneously billeted, and wherever they were quartered they must pay their way. No man was to be compelled to make or yield any "gift, loan, benevolence, tax, or suchlike charge" without common consent by Act of parliament.

No freeman was to be imprisoned except on cause shown, or was to be detained in prison without trial. If these principles were established by Statute, it seemed to the leader of the Commons that the endangered liberties of the nation would be safeguarded. With that Security they were prepared to vote as much as five subsidies, or £350,000.

The questions of billeting and martial law presented no serious difficulties to the mind of the king. There were loopholes in the clause concerning taxation, which it was rather his business to avoid pointing out, so that it would be wise to accept that clause without too much demur, but he was exceedingly reluctant to give way on the point of arbitrary imprisonment. The Lettre de Cachet was being used by Richelieu in France as a very powerful instrument for the repression of the nobility, and the concentration of power in the hands of the Crown.

In England the judges had just affirmed that it was within the royal prerogative to order the imprisonment of the king's subjects without stating any charge against them. If a charge were stated they could demand to be tried on that charge; if no charge were stated they could claim neither trial nor release. The principle at stake was absolutely vital. The Lords supported the Commons, and the king found himself obliged to give way. The Petition of Right took its place in the Statute Book, the subsidies were voted, bonfires blazed, and joybells pealed. England imagined that the victory of the Commons was won.

England was mistaken. The battle was but just joined. Charles had given way for the moment in order to get his subsidies; means would be found for making the Petition of Right a dead letter or something very near it. At the moment, however, the Commons proceeded to the serious business of attacking Buckingham, which had only been postponed because the assertion of principles demanded the leading place. A Remonstrance was drawn up which was in fact a detailed indictment of the duke and a demand for his removal.

But Charles was amenable only so long as his treasury was empty. He met the Remonstrance by pro­roguing parliament, and ostentatiously displaying his confidence in the duke. A new expedition was already in preparation for the relief of La Rochelle, and Buckingham was sent down to Portsmouth to take command of the fleet. The Petition of Right received the royal assent on June 7th, the subsidies were voted on the 12th, and on the 26th parliament was prorogued.