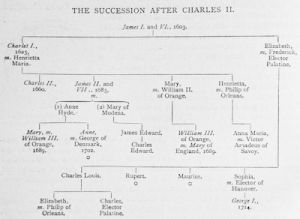 The succession after Charles II

Charles had tried to counteract popular hostility by an appearance of antagonism to France. It was now apparent that he could not win upon those lines. The moment had come for a final bargain with Louis. The bargain was made. Louis would give him an adequate pension if he ruled without parliament at all, and lent himself to the French king's policy.

King Charles in Oxford
It was of set purpose that Charles had selected Oxford instead of London as the gathering place of the parliament. No parliament sitting at Westminster could escape the consciousness of pressure from the force of public opinion in London.

Shaftesbury had systematically organised the City; a hint from him might easily raise a riot of a very dangerous kind. Oxford was safe. The undergraduates were not in residence, and the atmosphere of the place was extremely royalist. The colleges were filled with the men of the two Houses, and the town swarmed with their retainers, flaunting the Whig and Tory colours.

Parliamentary proposals
The Houses were met with a final proposal for compromise. The king would not assent to any deviation from the legitimate rule of hereditary succession, but he would consider anything short of exclusion. A definite scheme was submitted which probably originated with Halifax.

James was to become king of England if he survived his brother, but his kingship was to be merely nominal. He himself was to be banished from the country, and the royal functions were to be discharged by a regent. That regent was to be his elder daughter Mary, and, failing Mary, his younger daughter Anne.

The two princesses, it must be noted, were the daughters of James's first wife, Anne Hyde, Clarendon's daughter, and both adhered to the Anglican form of religion in which they had been brought up. If the Duke's second wife, the Roman Catholic Mary of Modena, should bear him a son, and that son were brought up as a Protestant, the regency would cease when he came of age.

Charles knew perfectly well that Shaftesbury and his following would not accept that compromise; had it not been so he would probably not have made the offer. Shaftesbury imagined it to be a last desperate attempt to save the situation; if Charles would agree to those terms it could only be because he felt himself beaten. Shaftesbury had his own offer; let the king put an end to the discord by acknowledging Monmouth.

Charles refuses compromise
The king refused to acknowledge Monmouth; the Commons refused to adopt, the regency scheme. Once more Shaftesbury brought in the Exclusion Bill. Charles, urbane as usual, interested himself in the arrangements for finding the Commons better accommodation for their debates in the Sheldonian Theatre, in place of the cramped chamber which they now occupied. Only the inner ring of the king's advisers had a suspicion of his intentions.

On the Monday morning the Lords assembled at their meeting place in the Geometry Schools. Thither the king betook himself privately, his state robes being conveyed in a separate sedan chair. All suspicions had been lulled. The Whigs had no fear of Louis; he had kept his own counsel, and his money was jingling in not a few of their pockets.

A summons came to the Commons to attend at the bar of the House of Lords; they came in gleeful anticipation that Charles was about to announce his surrender. They knew nothing of those robes of state which had been carried so secretly to the Geometry School, the robes he must wear in pronouncing the dissolution of parliament, the robes he was wearing when they entered the chamber.

The king spoke; the thunderbolt fell. When he ceased speaking there was no longer a parliament and no other parliament was called until his suc­cessor was on the throne. Charles had sold himself to the French king, and it mattered nothing to him that the constitutional source of supply was closed.

The sword upon which the House of Commons had relied was snapped at the hilt. Shaftesbury saw that the game was lost. The king would not have dared to act as he had done without the certainty that he the winning cards. To attempt an armed rebellion would have been madness. In impotent rage and fear the discomfited Whigs scattered to their homes.