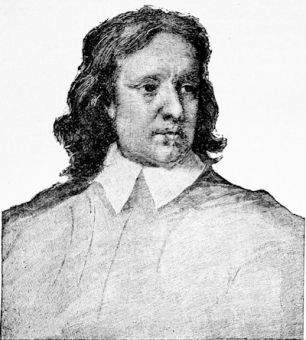 Oliver Cromwell, from a miniature by Samuel Cooper

Dunbar
In July Cromwell was in Scotland, but the government of the Covenant would not listen to his arguments, and when he advanced upon Edinburgh he found that the skill of David Leslie had posted their troops impregnably. He had no alternative but to fall back upon Dunbar, followed and shepherded by the Scots. Supplies were running low, the Scottish generals were not to be outmanoeuvred, and it seemed that Cromwell would be driven to escape as best he could to the ships which were in attendance. He was saved by the unspeakable folly of the enemy.

Leslie was overridden by the ignorant fanaticism of the clerical counsellors, who cried out to him to smite the blasphemers and sectaries whom the Lord had delivered into their hands.

With amazement and thanksgiving, Cromwell saw the Scots repeating the supreme folly of Flodden and Pinkie-Cleugh, and defiling from the position in which to attack them would have been madness, apparently with the idea of cutting him off from the sea. As he had smitten them at Preston by hurling himself upon the centre of their straggling column, so now he smote them in the rout of Dunbar. He was as sure as the enemy themselves had been that this thing was the Lord's doing.

But if it was the Scots whom the Lord had delivered into the hand of the English, and not vice versa, Dunbar did not by any means suffice to annihilate the Scottish resistance. Cromwell occupied Edinburgh, but Cavaliers and Covenanters in combination were still able to block his further advance and to reject his negotiations.

His own activity was checked by illness, but in the spring he advanced upon Perth, with the effect which he had perhaps anticipated. The way lay open for a Scottish invasion of England; and the Scots, carrying the king with them, seized their opportunity and marched for the Border. They entered England by the same route as before, streaming down through the Western Counties.

The Battle of Worcester
Cromwell was swift to follow, while another English force, under Lambert, moved towards Worcester to intercept them. But the English Cavaliers and Presbyterians did not venture to rise. Cromwell following hard on the heels of the Scots overtook them at Worcester, and there won the crowning victory. The Scots army was shattered, the young king became a fugitive, and after sundry hair's-breadth escapes succeeded in finding at the village of Brighton a boat which carried him to safety across the Channel. It was never again necessary for Cromwell to take the field.

In fact, the English Cavaliers, after the campaign of 1648, had despaired of further warfare on land and betaken themselves to the sea, where Prince Rupert appeared in a new role. He found, however, more than his match in the great admiral of the Commonwealth, Robert Blake; who after the fashion of the times was placed in command of the fleet because he had proved his capacity as a soldier ashore.

Blake swept Rupert off the English seas, and driving him into the Mediterranean laid the foundation of that English ascendency in the great inland sea which played so tremendous a part in her subsequent wars. The victory of Worcester laid Scotland at the mercy of England, and in that country the military control was left in the hands of General Monk.