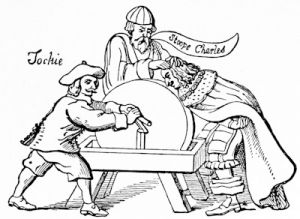 The Scots keeping the young king's nose to the grindstone, from a broadside of 1651 satirising the acceptance of the Covenant by Charles II

Before Cromwell was ready to leave the completion of his work in Ireland to his lieutenants, the clouds were gathering in the North. Scotland and England were bound together solely by the one link of the crown, and that link England herself had severed when she abolished her own monarchy by cutting off her own king's head and rejecting bis successor.

Her action was not binding upon Scotland; was on the contrary entirely repudiated by Scotland; which, with entire justification, declared it to be a flagrant breach of the terms of the Solemn League and Covenant — a Covenant which pledged both countries to loyalty to the person of the king. But if Scotland chose to acknowledge Charles II, the situation for England would manifestly be dangerous.

Scotland would only acknowledge Charles on condition of his signing the Covenant. That most cynical of princes would, with perfect cheerfulness and entire good-nature, have signed a dozen covenants to gain his own ends, and would have torn them up afterwards as suited his convenience. But devoted loyalty, in the person of Montrose, was eager to set the young king on his throne untrammelled by ignominious promises.

Charles always showed a gracious alacrity in encouraging his neighbours to self-sacrifice on his behalf. He temporised with the Scots from his safe quarters in Holland, while he suffered the heroic Montrose to go to his doom.

The fall of Montrose
The enterprise was hopeless. Montrose landed in Scotland, not in the regions where the kilted hosts were ready to flock to the standard oi the brilliant leader who would launch them against the hated Argyle and the Campbells, but in the far north, where the name of McCallam Mohr roused no passionate hostility. Instead of gathering an increasing host, he soon found himself alone and deserted, was taken prisoner in Ross-shire, banded over to the Government and hanged as a traitor, leaving a heroic memory cherished by all lovers of self-sacrificing loyalty and splendid self-devotion.

Since the "Great Marquis" had lost the hazard, Charles, with superb cynicism, accepted the terms offered him by the men who had just slain his most loyal servant as a traitor. He accepted the Covenant and landed in Scotland, where he probably learnt to feel something more akin to repentance than he suffered at any other time of his life. For Charles could endure hardship and privation, but he loathed seriousness, and in Scotland he had to wear the mask of seriousness everyday and all day, and a specially lugubrious mask on the Sabbath.

In Scotland, then, the nation had accepted a covenanted king, on whose person was focussed all the sentiment of loyalty in England which had been evoked by his father's tragedy. If he claimed the throne of England, there would be on his side not only the Cavaliers, but the whole weight of orthodox Presbyterianism, reinforced by numbers of the moderate men who had been shocked by the high-handed illegality whereby the Commonwealth had been created. And behind Cavaliers and Presbyterians would be the Scots.

Yet nothing could be more obvious than the right of the Scots, an independent nation over whom England exercised no jurisdiction whatever, to maintain the monarchy and to acknowledge the king in whose veins ran the blood of the Bruce.

An initial difficulty presented itself. Fairfax, the General-in-Chief, now as before refused to act against his conscience. England had no moral right to coerce Scotland. He would not seek to impose his own will upon England, but he would not lead an army into Scotland. He was obdurate to Cromwell's persuasions

It was no ambition of his own which had set him in command of the forces of the Commonwealth. His resignation was the only way out of the difficulty, and was accepted with more reluctance than it was offered. Cromwell became the General-in-Chief of the Commonwealth army.

This cartoon character humourously reprsented the essence of an Englishman


The character was invented by John Arbuthnot, a political pamphleteer

He first appeared in the History of John Bull, in 1712