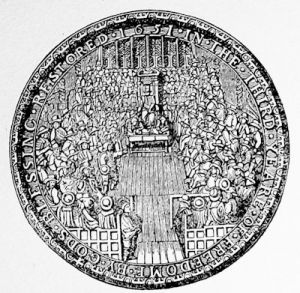 The Great Seal of the Commonwealth, 1651 - obverse view

The nine months which passed between the establishment of the Protectorate and the convening of the first parliament gave opportunity for Cromwell to show what kind of ideals were working in his heart and brain. Cromwell, more effectively than any of his predecessors, grasped at the idea of the union of England, Scotland, and Ireland, a union which should not destroy national differentiation. Scotland and Ireland were to have their share of representation at Westminster as members of the Common­wealth.

Scottish administration
The Executive Government of Scotland remained in the hands of a Scottish Council, though the Englishmen upon it were for the present the controlling force, and the troops under arms were Commonwealth troops. The treatment of Ireland was vitiated by the principle which virtually recognised only the Puritan settlers as free citizens. Freedom of trade within the Commonwealth was an invaluable boon to the two poorer communities; what­ever benefits England derived from the Navigation Act they shared, as also did the colonies.

In England itself the religious question was still the one of primary importance, and toleration was Cromwell's ruling principle, accompanied by the doctrine that religion should be maintained out of public funds. The exclusion of Anglicanism from the churches Cromwell admitted as a political necessity; but the tithes and endowments were neither abolished nor secularised, but were applied to what was virtually the concurrent endowments of the three principal religious bodies outside the Anglicans and Roman Catholics — the Presbyterians, Baptists, and In­dependents.

Anglicanism repressed
Anglicanism was repressed, because the assembling of Anglican congregations would have provided the nucleus for Cavalier disaffection. But besides the bodies among whom churches and parsonages and their endowments were distributed, the sects were free to form and maintain congregations of their own. That liberty was extended even to the Quakers, whose peculiarities rendered them obnoxious to every other religious denomination for varying reasons. It was Cromwell's government which at last after three centuries and a half readmitted the Jews to England.

Once more, it was Cromwell who at last initiated for England an active foreign policy rooted in Protestantism. The obstinate struggle with the Dutch was brought, to an end, and already in 1654 Cromwell was contemplating the use of the mighty fleet which the Commonwealth had created, for battle not with the Protestant Dutch but with the Spanish power, which still to him, as to the Elizabethans, seemed the champion of aggressive Papistry.

The idea that the Instrument of Government could be used as a step towards the real revival of a Free Parliament was soon dispelled. The Country had learnt to hate the Rump, but it had not learnt to love a military domination. The representatives who came up to Westminster in September 1654 were not at all satisfied with the Instrument of Government.

Cromwell gave them to understand that they had been assembled to attend to business, not to reconstruct the constitution; but constitution making is an amusement from which popular assemblies in revolutionary times are seldom capable of abstaining.

In spite of the exclusion of a hundred members, who declined to accept the Instrument, the remainder still persisted in proposing changes. Among other things they suggested that, in place of maintaining toleration on its present lines, there should be a definition of heresy, followed by the suppression of heretics.

Of course, at bottom, the question at stake was whether the real government of the country should be vested in parliament or in the Protector. From the point of view of the Army the Protector's powers were necessary to the preservation of the State.

Backed by the sentiment of the Army, Cromwell seized the earliest possible moment to dissolve the obstinate parliament, even straining the letter of the law by interpreting the five months' minimum as meaning lunar months, not calendar months.