James II and the Declaration of Indulgence 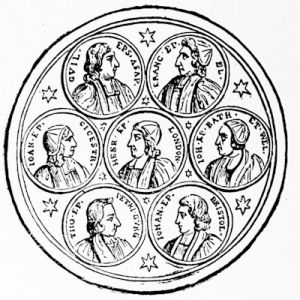 The Seven Bishops, from a medal contemporary with the trial

No Popery riots
A "No Popery" riot in London gave James an excuse for concentrating a force of sixteen thousand men on Hounslow Heath. While Sunderland was only waiting to avow himself a Roman Catholic, Rochester, at the beginning of 1687, resigned the Treasurership when he found that dismissal was the only alternative to changing his religion. At the same time Rochester's brother Clarendon, was recalled from Ireland, where he held the deputyship, which was now placed in the hands of the Romanist Richard Talbot, Earl of Tyrconnell.

The Declaration of Indulgence
By this time it was sufficiently manifest that James was aiming at establishing a complete Romanist ascendency by the use of the royal prerogative. It was also clear that he had completely broken with Anglican Toryism. But the English Roman Catholics provided a foundation far too narrow for the throne to rest upon with safety, James and his Jesuit advisers — for it must be remembered that he, like Louis, had allied himself not with the Pope but with the Jesuits — resolved to seek the alliance of the Protestant dissenters.

The issue of this resolve was a Declaration of Indulgence, put forth by the royal authority alone, which granted liberty of public worship to all Non­conformists, Protestant or Romanist, and suspended the application of all religious tests to holders of public offices. Anglicanism was scarcely re­assured by the accompanying declaration that the established church was to be maintained and the lay holders of what had once been ecclesiastical property were not to be disturbed.

Toleration then had been granted at a stroke, and for the moment James felt that he had won, since grateful addresses poured in from the Non­conformist bodies. But the surprised delight of the dissenters soon gave place to alarm.

It was true that they at once began to find themselves displacing in the corporations the Tories who had for so long held the monopoly, but it very soon became apparent that the higher offices of State were not to be open to all, but were to be made a preserve for Roman Catholics, and that all the more important administrative offices were to be filled after the same fashion. Oxford itself, the headquarters of Anglicanism, was attacked; and Magdalen College was cleared of its Anglican Fellows, whose places were taken by Roman Catholics.

These proceedings had the double effect of goading the Anglicans out of their attitude of non-resistance and passive obedience, and of alarming the Nonconformists. Toleration in itself was good; toleration by royal decree was questionable; toleration as exercised by the Crown might very soon be translated into a Romanist tyranny.

The first Nonconformist enthusiasm was rapidly changing to a suspicious antagonism. James made another bid for the support of the dissenters by issuing a second Declaration of Indulgence, followed by an order that the clergy should read it from their pulpits on two appointed Sundays.

The Seven Bishops petition
By that order passive obedience was strained to the utmost. A meeting of London clergy resolved on the exceedingly moderate course of presenting a respectful petition to the king praying that the order might be withdrawn, and challenging the legality of the suspension of statutes by royal prerogative. The petition was presented in the name of the Archbishop of Canterbury, Sancroft, and six more bishops; the saintly Ken, Bishop of Bath and. Wells, Trelawney of Bristol, White of Peterborough, Lloyd of St Asaph, Lake of Chichester, and Turner of Ely. This was two days before the Declaration was to be read. Next day the petition was printed and circulated.

On the Sunday the churches were filled with anxious congregations, but only in four places was the Declaration read; to the joy of dissenters as well as of Anglicans. The king plunged forward along the fatal path which he had chosen. He resolved to prosecute the bishops for publishing a "seditious libel." Three weeks after the presentation of the petition the seven bishops were lodged in the Tower to await trial, their passage thither being accompanied by the sympathising applause of the populace.

Birth of an heir disputed
Public excitement was already at fever heat; two days later it was roused to a still higher pitch by the announcement that at last a son had been born to James. With that strange infatuation which clung to every act of the king, the strict ceremonial attending the birth of a royal infant was neglected. Nine-tenths of the public believed, as might have been expected in the circumstances, that the story was a fiction; that the babe was supposititious, not the offspring of the queen at all.

There were several details which gave colour to the rumour. The birth provided an heir-apparent to the throne who would certainly be brought up as a Roman Catholic. The child would exclude Mary of Orange and her husband, unless, as the Princess Anne remarked, it "became an angel in heaven." Hitherto Protestants had reckoned with confidence that, whatever James himself might do, it was at least certain that his successor would be a Protestant. The certainty vanished with the birth of the boy. Excited Romanists, including the king, discovered that a miracle had been wrought; excited Protestants discovered not a miracle but a monstrous fraud.

Trial of the Seven Bishops
Again three weeks passed and the day of the trial of the bishops arrived. At first it was hoped that the charge would collapse upon technical points, but the Crown surmounted the technical difficulties. The case was fought out on its merits.

Of the four judges, two summed up in favour of the Crown, two in favour of the bishops. The jury at first declared themselves unable to agree. They were shut up for the night to argue it out. In the morning it was announced, to the frenzied joy of the populace, that the seven bishops were acquitted. Ominously enough for the king, even "Kirke's Lambs" on Hounslow Heath shouted their Protestant satisfaction.

An invitation to William of Orange
James had urged on the prosecution, fanatically credulous that the birth of his son had been a signal mark of Heaven's favour for the course which he was pursuing. On the night after the seven bishops were acquitted Admiral Herbert, disguised as a common seaman, was carrying to The Hague a letter inviting the intervention of William of Orange; it bore the signatures of the Tories Danby and Lumley, of the Whig Earls of Devonshire and Shrewsbury, of Henry Sidney and Edward Russell, brothers of the two chief victims of the Rye House Plot, and of Compton, the Bishop of London.