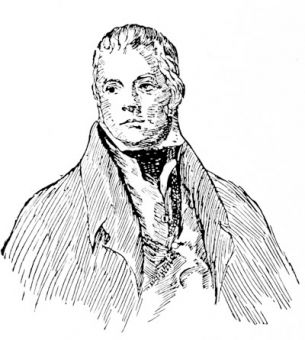 Sir Walter Scott, after the painting by Raeburn

The era of political and social revolution was the era also of a revolution in literature, or at least in poetical literature. The spirit which gave birth to the French Revolution was one of revolt against conventions which society had come to regard as conditions of orderly existence. The same spirit revolted against the conventions which had made poetry as artificial as society.

Polite culture, however, had allowed a certain interest in a barbaric and uncultivated past. It had suffered itself to pay a tribute of admiration to the ballad literature col­lected by Allan Ramsay in Scotland and Bishop Percy in England. It had even indulged in a somewhat un­critical enthusiasm over James Macpherson's Ossian, which claimed to be an ancient Celtic Epic, though sceptical readers such as Dr Johnson entirely declined to endorse its genuineness.

From these explorations into the past came one of the impulses which helped to bring a new poetical literature to birth. A second impulse came from the fact that outside the recognised literary world the lyric in its simplest form, song, had survived as a natural product among the Scottish people ever since the days of William Dunbar and the reign of James IV; and Scottish song suddenly culminated in the genius of Robert Burns at the moment when England's last literary dictator was removed by the death of Samuel Johnson.

Robbie Burns
In Scotland Burns was the last and the greatest of a long line of singers; to England he appeared as the originator of a new movement. All that was greatest in him completely traversed the recognised literary canons. In the language of his own countryside, not in the language of culture, he expressed the emotions, the passions of his own countryfolk, in verse of that magical rhythm which no art can acquire.

Burns himself was not in conscious rebellion against literary conventions, because those conventions had never been imposed upon him. Nevertheless the new spirit was incarnate in him, hating bondage of any sort for himself or others, often reckless and uncontrolled, but ardent, sincere, and full of a broad and deep human sympathy. Convention stifled him, and when, on occasion, he deliberately fettered the form of his writing, his individual characteristics disappeared and he became commonplace.

For the true note of the Revolution was Individuality, and its strength lay in the free development of individual characteristics. The revolutionists were of no school; they pursued the most diverse methods and the most diverse aims. They acted upon irreconcilable theories; they were at one only in their rejection of the methods and theories and aims of the school which had dominated the eighteenth century.

The Lakeland Poets
They were for the most part men to whom at the outset the French Revolution seemed to open out vistas of unlimited promise, in whom it aroused the passion of humanity and the passion for liberty; both passions are perfectly consistent with the instinct of conservatism, the love of order, and even exaggerated ad­miration of the past.

Many of them became the more conservative when the events in France disappointed their first enthusiastic hopes. Typical conservatives as well as typical revolutionaries were numbered amongst them. But they all agreed in breaking away from the current literary ideals and in asserting their own individuality.

Burns was the harbinger of the new day whose dawn was signalised by the publication in 1798 of the Lyrical Ballads by Wordsworth and Coleridge, which in­cluded Coleridge's Ancient Mariner and Wordsworth's Tintern Abbey, as well as many other pieces which exemplified a new theory of the poetic art.

Thus was founded the "Lake School," which was not a school at all. It was called a school and looked upon as a school because its members were associated together as friends; and it was called the Lake School because they settled for a time in proximity to each other in the Lake district, which Wordsworth made his permanent home.

To realise that in doctrine and practice they were poles asunder, it is sufficient to compare the two masterpieces in the Lyrical Ballads. An imagination at once vivid and mystical and a haunting melody of expression were the primary characteristics of Coleridge. Wordsworth was above all else the prophet of Nature, as the expression

"Of something far more deeply interfused,
Whose dwelling is the light of setting suns,
And the round ocean and the living air,
And the blue sky and in the mind of man,"

"That blessed mood,
In which the burthen of the mystery,
In which the heavy and the weary weight
Of all this unintelligible world
Is lightened."

Sir Walter Scott - father of the modern novel
As unlike to both Wordsworth and Coleridge as to Pope and Johnson was the next star that appeared on the poetical firmament, Walter Scott. Scott was no prophet; he had no gift of spiritual insight; but with him poetry resumed its function as the medium of the story-teller.

Before long he was to desert poetry for prose and to raise the novel to a new place in literature. Scott, in his own eyes, was not at all a rebel against the existing order; he was merely reviving the conventions of the past, appropriating the ballad idea to new conditions.

But for all that he in fact preached by his example a return to naturalism, to spontaneity, instead of submission to the canons of orthodoxy. Upon Scott followed Byron, superficially the most rebellious and fundamentally the most conventional of the whole group; the most conventional, because he did not distinguish between poetry and rhetoric, and the great bulk of his verse is rhymed rhetoric, according therein with the eighteenth-century convention. But he too was insistent upon individuality.

Two other great poets belong to this galaxy whose main poetical work was accomplished between 1785 and 1825, though three of them survived that date and Wordsworth's life was prolonged until 1850. These two, Shelley and Keats, again emphasise the wide diversity, the individualism which characterised the new era. Keats may be called the high priest of the religion of Beauty, but if any actual historical personage can be named as the archetype, the supreme expression, of all that is meant by the term "Poet," Shelley was that man.

Poetry was re-born in the revolutionary era, and the nineteenth century learnt to regard it as a matter of course that there should be great poets living in England, regardless of the fact that great poets are not a normal and constant product of any country in the world. But apart from the poetic revival, the most striking literary features of the period were the creation of the Review and the establishment of the Novel as the most influential form of creative literature.

The Edinburgh and Quarterly and Blackwood provided new media for criticism, and for the literary treatment of politics. When Sir Walter Scott turned from writing stories in verse to writing novels in prose it might almost be said that the novel stepped into the place which had once been occupied in literature by the drama.

The literary aspirant came up to London with a novel in his bag instead of a tragedy in his pocket. For a full half century Scott continued to be acknowledged as the supreme master; others took their places beside him perhaps, but superiority was claimed for none.

Later generations have disputed his claims, but the fact remains that Scott was the master who taught the rest of the world the novelist's craft. George Stephenson's "Rocket" would not have travelled from London to Edinburgh at a speed of seventy miles in an hour, but as George Stephenson was the father of the modern locomotive, Walter Scott was the father of the modern novel.

A force of Danes defeats the English at Maldon, in Essex. The English establish a dangerous precedent by paying the first Danegeld, a form of protection money to procure freedom from Danish attack.