Edward I and Wales 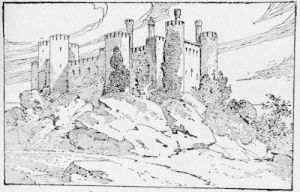 Conwy Castle, north Wales, built during the reign of Edward I, after the English conquest

The legislative activities of King Edward were periodically interrupted by the contests with the Welsh, which were hardly ended with the overthrow of the patriot prince Llewelyn and the absorption of Wales into the English dominion. But Edward's conquest was so far practically effective that the Welsh thenceforth were troublesome only when they acted in concert with English rebels.

The story of the relations of the Welsh with their more powerful neighbours, and of their final subjugation, may now be briefly told. Swept out of England into the mountainous districts beyond the Severn by the advance of the Saxons, cut off from their kinsmen in the south by the battle of Deorham, and from the Strathclyde Britons in the north by the battle of Chester, the Britons in Wales had still defied subjugation by the English. Offa of Mercia drove them in behind his dyke; but the utmost that any of the Saxon kings had accomplished was to exact a precarious tribute and formal acknowledgments of sovereignty.

The raids of the mountaineers compelled the Norman sovereigns to grant their own earls on the Welsh marches abnormal powers; a Norman earldom was even planted in Pembroke; but while the lords of Cheater, Shrewsbury, Hereford, and Gloucester carried on perpetual wars with their Welsh neighbour, the Welsh still remained practically independent, separate, speaking their own language, following their own customs, and owning no Norman overlord, except so far as their various princes found it convenient to acknowledge the sovereignty of the King of England.

Rufus tried to bring them under his heel, but his Welsh invasions ended in ignominious failure; even Henry II, was hardly more successful. The Welsh, like other Celtic peoples, were extraordinarily difficult to subdue, and yet lacked the political instinct of unity necessary to the formation of a consolidated state capable of establish­ing a permanent independence.

Llewelyn ap Iorwerth
Yet in the thirteenth century such a consummation seemed almost within sight. Almost throughout the first half of it, Llewelyn ap Iorwerth was lord of Snowdon, the north-western division of the country. He for the first time succeeded in combining other Welsh princes under his leadership, and made use of the contests between King John, King Henry, and the barons to strengthen his own position. When Llewelyn died in 1240, it seemed that his work was doomed to be undone; the Welsh again betook themselves to internal strife, until a second Llewelyn, son of Griffith, son of the first Llewelyn, succeeded in establishing himself as prince of Gwynedd or Snowdon, and assumed the role of a patriot leader in 1254.

Llewelyn ap Gruffudd
Since Henry's principal supporters among the baronage were to be found among the Marcher earls, Llewelyn was presently in alliance with Montfort. Nevertheless he did not fall with Montfort, but made his peace with the king at Shrewsbury on terms highly satisfactory to himself; making a formal acknowledgment of the English overlordship, and retaining for a price the northern territories which had been annexed to the English Crown after the death of the first Llewelyn, and recaptured by himself on his first assump­tion of the Welsh leadership.

But Llewelyn on the one side was not content; he dreamed at least of creating an entirely independent principality, Edward, on the other side, had his own dream of a dominion extending from Cape Wrath to the Channel; though that dream could not come within the range of practical politics while his brother-in-law, Alexander III, reigned in Scotland. There was no apparent prospect of an opportunity for dealing with the northern kingdom; but if Llewelyn should give him an opening in Wales he was prepared to turn it to account; though according to his principles he would only act under colour of legal right.

Henry III, was hardly in his grave, and his successor was still abroad, when Llewelyn began to experiment with the government of England. He evaded every summons to render homage to the new king, and he ceased to make the payments required of him under the treaty of Shrewsbury. Edward was fully warranted in taking active measures.

The Treaty of Aberconway
In the beginning of 1277 the royal forces advanced in the middle Marches and in South Wales, where the Welsh made immediate submission. In the summer he marched a great force along the northern Welsh coast, and cooped up Llewelyn in the Snowdon district. Faced with the prospect of being starved out in the winter, Llewelyn submitted to the treaty of Aberconway, which left him the lordship of only that portion of Gwynedd which he had acquired in 1254.

So far Edward's conduct was unimpeachable, and he now proceeded on the lines which present themselves to the English mind as those obviously dictated by common sense, and to the Celtic mind as a violation of the most cherished sentiment. He tried to Anglicise Wales, and to impress upon the Welsh by the force of example the superior merits of English institutions.

The Welsh looked askance. Customs which in the eyes of the English were relics of a childish barbarism, which an intelligent people would be prompt to repudiate as soon as their eyes were opened, had to the Welshmen the sanction of immemorial tradition.

The Welsh mountaineers found nothing to admire in the little colonies of English traders and agriculturists which were planted in the government centres. The English law and the English legal machinery offended their instincts and ignored their traditions. The Welsh gentry found their rights curtailed and their personal dignity insulted by the intruders, who held them in small respect.

In a very short time the Welshmen were repenting of their submission and craving for escape from the beneficent English rule which in their, blindness they had brought upon themselves. The men whose jealousy and desertion of Llewelyn had made his overthrow so easy were the first to turn to him as their only possible deliverer. The surface was calm, but under it insurrection was brewing. Edward was deaf to complaints which savoured to him of childish not to say immoral unreason. The storm broke suddenly and without warning.


His son Matthew was a popular poet and influential schools inspector

He was largely responsible for reforming public school standards of education