Edward I and William Wallace 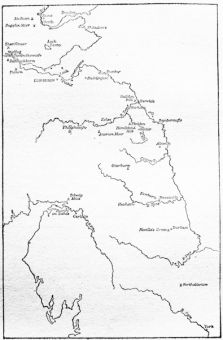 Edward's probable intention was ultimately to assimilate the government of Scotland with that of England; but practically the government he set up was a military occupation by the English; and the English garrison behaved after the arrogant fashion of conquerors. Whatever feudal magnates might do, the people of Scotland had no mind to submit to the tyranny of foreign masters: and long before Edward bad departed to Flanders popular insurrections were on foot, headed in the western lowlands by a gentleman named William Wallace, round whom large numbers of the common folk promptly gathered.

Several of the barons joined the insurrection, though their attitude was habitually half-hearted, and most of them were to be found during the following years fighting alternately for and against the English king. Warenne attempted to suppress the rising; but owing to his blundering incapacity his forces were cut to pieces by Wallace at the battle of Cambuskenneth or Stirling Bridge. Except for two or three castles, the English forces were swept out of Scotland; while the barons of England were engaged in extorting the Confirmatio Cartarum from the regency which Edward, now in Flanders, had left in England.

Wallace was the one man who had openly and uncompromisingly set England at defiance. He had begun his career by breaking the heads of English soldiers and continued it by what the English called brigandage; whereas such of the barons as had joined with him were at least in no worse position than that of mere rebels against feudal authority. None of them was prepared openly to stand forth as leader of a revolt in the name of King John Balliol. Wallace, by what authority we do not know, was proclaimed Protector of the kingdom. But six months after Cambuskenneth Edward was back in England, and in July he was in Scotland with a large army.

Battle of Falkirk
Wallace had collected a large force, though he had but few archers, and a mere handful of cavalry, on whom no reliance could be placed. Still, at Falkirk he gave battle to King Edward's host. The Scots fought after their own fashion, and if Edward had not drawn the moral from his Welsh wars the Scots would have won. Wallace massed his men in four solid bodies of spearmen, the formation known as the "schiltron." The few archers posted between the solid masses were promptly cut to pieces by the charging English, and the cavalry incontinently took to flight. But the chivalry of England hurled itself against the mass of spears as.vainly as the Normans had done at Hastings, until Edward, coming up with the main body of his army, advanced the archers within point-blank distance and bade them concentrate their fire on particular points in the spear-hedge. The Scots could only stand to be shot at or break their formation and charge. Great gaps were made in their ranks, and into these Edward hurled his cavalry. The stubborn resistance was turned to a rout, and thousands of Scots were left dead on the field, though Wallace escaped and remained at large.

Consequences of Falkirk
For the moment it seemed that the battle of Falkirk was decisive. Edward withdrew; but he had only effected a temporary reconciliation with his barons, who were still pressing to have full effect given to the Confirmatio Cartarum. He was too much taken up with other affairs immediately to organise the government in Scotland. Wallace's power was gone, and probably he betook himself abroad to negotiate with the King of France and the Pope; but the barons, who withheld their support from a mere gentleman like Wallace, were more inclined to act when Wallace was out of the way. Hence in the years following Falkirk there was little enough sign of English authority north of 'the Tweed, though no one knew at any given time which of the nobles would be posing as patriots and which as Edward's men a week later. Then came the Pope's intervention, which seemed to unite the English barons in support of Edward so far as Scotland was concerned.

The prospect of an invasion of the country by Edward in person brought over some of the Scots nobles, including young Robert Bruce, the grandson of the old claimant, who at this stage of affairs appears to have changed sides perpetually.

In 1303 Edward marched through Scotland, meeting with little resist­ance as usual; and when he again entered Scotland with an army in 1304, the nobles of the national party gave up the struggle and surrendered on terms. Edward was ready to admit practically every one to his peace with the exception of William Wallace, who was back again, though without any recognised authority. Not long after, Wallace himself was caught, by vile treachery according to common tradition, carried to London, and hanged, drawn, and quartered as a traitor. Myths and legends swarm about the national hero who never bowed the knee to the foreign usurper. He was probably bloodthirsty, and he had suffered personal wrongs enough to make his bloodthirstiness excusable. But he stands out alone as conspicuously the one man who gave himself body and soul to the cause of Scottish liberty, and therefore the one who in Edward's eyes was guilty of unpardon­able crime. It was he and no other who inspired the people of Scotland with that passionate patriotism which was to bear fruit when another leader came to the front who had hitherto shown little enough promise of becoming a national hero.